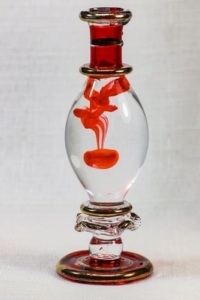 The Sotah: Presencing Judaism’s Dark Side

Content Warning: This dvar torah will explore the Sotah ritual, which involves the public humiliation of women. It will also reference sexual assault. Please only read if you feel you are able.

I first learned about the Sotah ritual – the trial by ordeal for a woman suspected of adultery – through the lens of Star Wars. As a child and then a young teenager, I was privileged to be part of a fair few skits, written by my mother (with some help from the rest of us), to bring the Torah portion to life for our synagogue’s family services. Parashat Nasso, which regales the reader in great detail with the humiliating and nausea-inducing Sotah ritual, posed a particular challenge for us, but we ended up with the following Star Wars-themed skit, in order to make an age-appropriate, yet honest, exposition of the Biblical text:

HanYechid (Solo), convinced by Darth Vader (his “yetzer hara” or Dark Side) that Princess Leia had cheated on him with Luke Holech-al-haShamayim (our best attempt at “Skywalker”), brought her to the priest, Obiwan ben Kenobi, in order to perform the Sotah ritual. After drinking a magic potion prepared by Obiwan, Leia was vindicated (though suitably annoyed). (Also, at the risk of spoiling the films for anyone who hasn’t seen them, there are other reasons why a relationship between Luke and Leia wouldn’t have made it past the Biblical legal system.)

I’m glad that I learned about the Sotah at a young age, but it’s only recently that I’ve truly internalized the horror inherent in the ritual itself. For those who haven’t yet encountered Numbers 5:11-31, here’s the precis (not unlike the Star Wars version, but with far more evidence of Judaism’s own Dark Side):

If a man flies into a jealous rage, convinced that his wife has slept with another man, he can bring her to the priest (the woman’s own testimony has no bearing here). The priest prepares a concoction made of sacred water and dust from the floor of the Tabernacle. He bares the woman’s head and utters the words of a spell, which declares: “If you have gone astray while married to your husband and have defiled yourself…may YHVH make you a curse and an imprecation among your people, as YHVH causes the belly to distend and the thigh to sag.” The woman must answer, “Amen! Amen!” The priest writes down the curse and scrapes the letters into the potion, dissolving the words in the water. The woman drinks the potion. If nothing happens, she is innocent, and likely becomes pregnant. If there are physical consequences (which are unclear, but are most definitely distressing, and possibly mean she has a miscarriage), she is guilty. While the text does not indicate further punishment for the woman here, Leviticus 20:10 rules that adultery is a capital crime.

The Rabbinic imagination makes this text even more grotesque – the woman’s humiliation is explicitly public and involves additional physical abuse. (I’ll spare us the details here, but if you’re curious, you can read Mishnah Sotah.) However, one thing the Rabbis note is that the Sotah ritual necessarily involves the erasure of the Tetragrammaton, God’s most sacred name. So sacred, in fact, that only the High Priest could speak it aloud once a year on Yom Kippur. We still refuse to say it, and we do not destroy any texts that contain it. And yet, the Sotah ritual erases the name of God. Usually the erasure of a name is only something Judaism wishes on our worst enemies (and there’s a whole other ethical conversation to be had there) – but the name of God?! How could the Torah possibly enjoin us to wipe out the name of God?!

I believe this detail of the ritual is actually meant to deter its implementation. It calls on the jealous husband to examine the impact of his own actions, as if to say, “Do you really want to do this to your wife? Don’t you realise that your own cruelty not only harms her, but also is in and of itself a desecration of the Divine?” In order to follow through with the Sotah ritual, a husband must be so determined to humiliate, harm and exact revenge on his wife, that he doesn’t mind that he is also enacting violence against God. This is not meant to act as an apology for the Sotah ritual, but to call attention to the fact that this ritual flies in the face of our texts’ own principles. The texts know just how awful the ritual is. They want people to think hard before invoking it.

It’s easy to dismiss Biblical passages like this one as relics of the past, that we can comfortably shrug off as “things they did back then.” But the Sotah ritual didn’t fall out of practice as long ago as one might think. Gideon Bohak, in his book Ancient Jewish Magic, offers evidence that the Sotah ritual was potentially still being done as late as the 11th century CE (albeit substituting the dust from the Tabernacle or Temple floor with dust from the bottom of the ark in a synagogue). And whilst I don’t know of anyone still performing the Sotah ritual today, there are still many instances in which women and other marginalised groups are not believed, and therefore are subjected to psychologically damaging and humiliating procedures. I think of our adversarial justice system, and how survivors of sexual assault often find themselves in situations in which they themselves feel they are on trial, retraumatised by a system designed to poke holes in their testimonies and discredit their stories.

When our texts present these horrific narratives, it is not enough to say, “Well, we don’t do these things anymore; we’re so much more enlightened .” It is an injunction to ask, “In what ways might we still be doing these things?” Perhaps we don’t subject women suspected of adultery to trials by ordeal anymore, but there are other situations in which we disbelieve people who share their truth with us, and therefore we knowingly or unknowingly treat them unfairly or even abominably. The Sotah challenges us to reflect on our own Dark Side, reminding us that we, too, are capable of eroding the dignity of others. It is an imperative to ensure that we do not become guilty of perpetuating injustice, a reminder that when we humiliate and traumatize others, we also wipe out the name of the Divine.