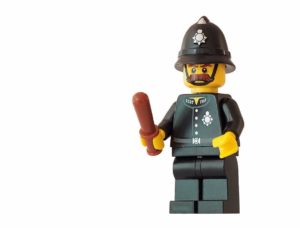 A video of a policeman in Lancashire shouting and swearing in the face of a member of the public, before threatening to “make something up” to fabricate criminal charges against them,  has gone almost as viral as the coronavirus which formed the basis of their encounter.

It is just one of a series of misguided and hyperactive police attempts to enforce the lockdown, which also saw an “over-exuberant [Cambridgeshire Constabulary] officer”  tweet that people should not visit “non-essential aisles” in supermarkets;  officers in Derbyshire use a drone to shame people for (lawfully) walking their dog;  footage of constables in Manchester threatening to pepper-spray a black man who was delivering food to a vulnerable relative;  and the British Transport Police even had a black woman convicted of a made-up criminal offence under non-existent coronavirus legislation. All of these, in Britain, in 2020.

Judaism treats police officers as deriving their authority from Deuteronomy 16:18:

“You shall appoint for yourself judges (‘shoftim’) and officers (‘shotrim’) for everywhere that the Eternal One your God is giving to you, for all your tribes, and they shall judge the people with a proper justice.”

‘Shoftim’, from a root meaning ‘govern’, was taken to refer to judges;  ‘shotrim’, from an unusual root for ‘drawing a line’, refers to some sort of executive officer  (or, in Modern Hebrew, to police officers).

A midrash distinguishes their roles as follows: “Judges, these are jurists. Officers, these are the chiefs who direct the community. Rabbi Elazar said, ‘If there are no officers, there can be no judges.’ How is this so? When someone has been ordered by a court to pay damages to another person, if there is no officer to extract from them the money once the litigant has left the judges, a judge has no ability to do anything about it… except to hand the matter over to an officer, and the officer can extract the money.”

This clearly establishes that police officers are necessary. Without them, the law – even if laid down clearly by judges – would go unenforced, and individuals would be able to vindicate their rights without any means of having those rights actualised.

However, the methods police use to enforce the law, necessary as they may be, do not always seem savoury. The Mishneh Torah records: “It is a positive commandment of the Torah to appoint judges and officers in every region and in every district. Judges, these are the jurists who preside over the court: litigants come before them. Officers, these are men with sticks and whips, who stand before the judges and who roam about the marketplaces and the streets and the shops, to correct their measures and their measuring instruments, and to beat every wrongdoer.”

Men with sticks and whips. Policing is inherently violent as an activity. That does not mean police officers are always violent to every person; clearly they are not. However, they are always carrying, literally or figuratively, a stick. A simple fine for littering or fare evasion may seem non-violent (if irksome), but it only takes the simplest thought experiment to realise what will happen if one refuses to pay. Ultimately, at some point, men with sticks and whips will appear – and it is usually men – whether to imprison or to seize goods by force.

There is a reason that the texts exclusively refer to ‘shotrim’ in the plural. The Mishneh Torah said, “Shotrim: these are men with sticks and whips,” not, “A shoter is a man with a stick and a whip.” Policing is plural by nature. It inevitably carries with it a solidarity that is both necessary and dangerous. It can be laudable camaraderie; it can be a sinister blue wall of silence in the face of allegations of misconduct.

This is a hugely important issue. No, not all police are like the ones whose misconduct has been caught on film in recent months. No, not all police get so over-excited by having a drone that they just have to use it to bully members of the public. But those people are in the police service and they exercise powers on behalf of the rest of society.

Rabbi David Chaim ha-Levy, writing in modern-day Israel, saw policing as a key part of a nation’s route to its destiny: “The role of officers is not confined to the wielding of a stick and a whip alone, nor to the punishment of offenders. Rather, they are chiefs of the generation and therefore the personalities of the officers of Israel must be personalities of the highest morals, which will themselves serve – from this day – as a fine example of compliance with the law and pure morals. Thus the Blessed One will judge us to have the merit to see the life of our society become established on foundations of purity and holiness.”

We are a long way from that society (so is Israel and almost every other country on earth). Solving the institutional problems with our police force will not get our society to its ultimate destiny straight away. It might not even be possible. But it is the task set for us by the verse in Parashat Shoftim which sets up the police system and the justice system in the same breath.