Nestle in the shadow of question marks 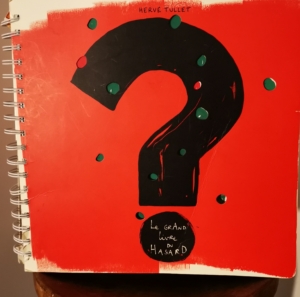 Some time ago, when the grey sky frowned and took itself for a wet sponge, I was sitting on my sofa, reading to my 3 year old daughter the book “Le Grand Livre du Hasard” by Hervé Tullet [1]. In this graphic book, the artist attaches particular importance to playing with the shapes of the letters of the alphabet as well as the punctuation marks …[2]

Turning the pages, playing with the shape of a question mark, I’ve been thinking about the forms that these letters took over time and how these signs crossed the threshold of abstraction to represent sounds and then became proper alphabets. The letters have been therefore moving from figurative to abstract shapes. And if we know now how the shapes of the letters have developed until now, we have to keep in mind that they are still moving to a yet unknown form. Behind each letter we read a question mark is shadowed.

How curious is the image of the lowly question mark found at the end of a sentence.
When you take the time to look closer at it, you can imagine it being similar to the profile of a dancer.

Like a contemporary dancer such as Martha Graham found it, balancing on her tiptoes anchored on the ground, curling upwards, and turning in her long arms towards herself in a delicate gesture …

Tensegrity is a fundamental principle about how dancers play with balance and imbalance. The balance of a structure or a body would be based on the opposition of forces, on tension. Going to the left, for example, a dancer would put up resistance on the right side. It is this work of tension that gives the sensation of a movement in suspense.

Somehow, we may discover this work on tensions in similar way in the Hebrew language.
Hebrew language does not offer the verb “to be” conjugated in the present tense. The present tense, fleeting, elusive by nature, is in a permanent tension between the past and the future. Nestled in a certain uncertainty, the present time, that is to be “the reality”, would therefore be somehow hypothetical, alive and not easily objectifiable.

In this regard the Talmud Sanhedrin tells us that “the truth is like a flock of sheep.” Seen from afar, it constantly moves like a flock in a pasture.

If we dare to take one further step to japanese literature, haikus, these short poems are dedicated to depicting the living or “the evanescence of an instant”. and the common point with describing or talking about God is precisely that detailing God is impossible. Haikus never precisely describe things in an objective and technical way, but evoke them with distance, metaphor and concision. The text, thus similar to three brushstrokes, leaves silence, empty space necessary for impermanence and the uncertainty of expressing oneself fully. Silence and unspoken words so that the words beyond words can be fully expressed.

It is the same in the biblical text and in the Jewish tradition in general. The most precise and closest meaning of the biblical Hebrew is often expressed, as in the haiku, in the evocation or the implied, in what Emmanuel Levinas would call “caress” in the sense that “the caress consists to seize nothing, to solicit what escapes, what escapes ”. It is not an intentionality of disclosure, he said, but of research.”

And all this dialectic is beautifully suggested in the Bible, parasha Behalotekha with the manna.

Manna is food that God drops from the sky. That’s about all we know about it. The rest, whenever it is described, is elliptical, allusive, but never really describes it. We have scattered elements that allow us to portray it as a haiku without ever really describing it. But the text goes further by suggesting that by eating manna in the desert, the children of Israel fed on questions.Besides, the very word for the manna is a question:

In the book of Exodus, when the children of Israel discovered the manna it is written: “At this sight, the children of Israel said to each other, ‘What is this?’ (In Hebrew Manne hou?) Because they did not know what it was. And Moses said to them, “This is the bread which the Lord gives you for food. The word “manna” literally means “what?” “, ” What is this?” The manna is literally a question.

So what is manna?

Parashat Behalotekha tells us that the manna was like the seed of coriander and that its color was like that of the bedolach (colour of the crystal), that is to say transparent, so that it had no colour of its own in short … So let’s go further: in Talmud Yoma relating to the laws of Yom Kippur, we learn that manna is white and “that it whitens our faults”.

But the Sages then ask themselves: how can it be similar to coriander seed and white at the same time? The coriander seed is vaguely brownish. The sages then play on the proximity of the words “gad” (the seed) and “lehagid” (to tell) to say that the manna, like the fact of telling a story, “would draw from the heart of man like water in a well ”.
The Talmud Yoma also tells us that manna takes on the taste of what one thinks, but is devoid of texture. It would only be a vector of ta-am (“taste” and “meaning” in Hebrew).The book of Exodus metaphorically names manna “Lekhem haShamaim” (bread from heaven).

But then how is it that all these wonders are mentioned in Talmud Yoma which is about the Laws of Yom Kippur? The manna is mentioned when the Sages seek to clarify this verse from Leviticus “Véinitem et nafshotekhem” (and you will mortify your souls). But then why is eating manna an affliction? And what can “mortify one’s soul” mean? Mortifying the body would be much clearer.
However, the word veinitem has the same root (Ayin nun hé) as the word anah (respond) … It may not be “mortification.” Besides, nowhere is it stated so literally. Perhaps it is a question here of “answering”. The children of Israel, fresh out of the desert and allegedly fed on Manna, literally on “What?”, on Questioning.
This is their food. Food of angels, volatile and elusive, in the image of God

I was still full of questions when I gently obeyed my little girl’s injunctions, on my sofa, in front of Hervé Tullet’s “Le Grand Livre du Hasard”. We played with the shape of the letters, interchanging their shapes without knowing that later an “A” might take the strange shape of our games and that behind each letter hid in shadow the question of its future form.

So let’s go, let’s slide under the dew of the desert, seeing in the manna a light rain of question marks. Let us feed ourselves with questions like our mother’s milk because this bread of delicacies is there, in the hollows of the text, within our reach if we take the trouble to search for it.

[1] Tullet H. Le Grand Livre du Hasard (Paris, editions du Panama 2008)
[2] Ibid
In this book, the pages are cut horizontally. It is possible to exchange the top or bottom of the shape of a letter. We can thus play with forms and invent new forms of letters.