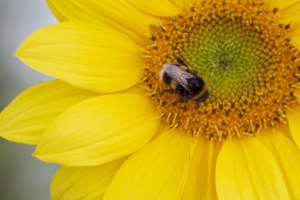 “Anthony Bridgerton had always known he would die young” – and the secret trauma behind that conviction is what drives the plot of Julia Quinn’s novel The Viscount Who Loved Me, aka series two of the hit Netflix series Bridgerton.  As a 17 year-old, he lost his beloved father after that father was stung by a bee, leaving Anthony both convinced that he too was fated to die young and hyperaware of the power of a tiny insect.  Certainty of his impending mortality drives him to court the ‘diamond’ of the season, a young beauty named Edwina, intending to have a chance to know his children before dying; hypersensitivity to the danger posed by bees causes him to be caught in a compromising situation with Edwina’s sharp-tongued sister Kate; when Anthony and Kate marry, both fears threaten their romantic happy ending.

Generally, the knowledge that bee stings cause 2-9 deaths each year in the UK does not result in extreme caution: we might ignore a buzzing bee, or swat it away with a degree of annoyance, but unless we have direct experience of allergic reactions, many of us are do not take the threat extremely seriously.  A similar phenomenon is often seen at the other end of the danger scale: workers in power plants may conscientiously observe safety precautions, but often become desensitised to being in the presence of enough power to kill them, unless a nasty accident has occurred in their vicinity.  While it is easy to know that something is dangerous or extraordinary, our minds quickly learn to treat things we encounter regularly as normal, unless something happens to shock us out of our complacency.

Sometimes the shock comes even before complacency can set in.  During the first days of worship in the Tabernacle, Leviticus records an event that starkly reminds the priests of the danger inherent in their place of work.  Parashat Acharei Mot begins with a reminder of what has just happened (Leviticus 10:2), on their induction day: “The Eternal spoke to Moses after the death of the two sons of Aaron who died when they drew too close to the presence of the Eternal” (Leviticus 16:1).  Whereas the initial report of their deaths emphasised their bringing of “strange fire”, here it seems that Nadab and Abihu died through failing to keep a safe distance.  As if this shadow of death cast over the whole parashah were not warning enough, their bereaved father is then cautioned as Yom Kippur instructions begin that “he is not to come at will into the Shrine behind the curtain… lest he die, for I [God] appear in the cloud over the cover” (Leviticus 16:2).  As Rashi explains, the Shechinah is continuously revealed in the Holy of Holies, so Aaron must not get into the habit of coming there casually: coming close to God is something too risky to get used to, even for the High Priest.

Aaron and his wife Elisheva probably realised this all too well.  Midrash (Leviticus Rabbah 20.1) describes this rollercoaster day for her: ecstatic pride on seeing her husband and four sons installed as priests, with extra naches from her chieftain brother and her brother-in-law the prophet, and devastating grief when two of her sons died.  After such an emotionally affecting experience, how could she and Aaron remain anything but alert to the risk run by the priests every time they entered the Tabernacle?  Even Torah seems affected by the tragedy, recalling it again in the genealogy of Numbers 26:61 and at Numbers 3:6, where the text adds poignantly: “and they left no sons.  So it was Eleazar and Ithamar who served as priests in the lifetime of their father Aaron.”  Like Anthony Bridgerton’s hyperawareness of bee stings, it is perhaps easy to imagine the two surviving brothers rendered acutely alert to the dangers of their priestly role, especially when Eleazar succeeded his father as High Priest.

Yet sacrifices still needed to be offered, regularly, and the highly hazardous rites of Yom Kippur needed to be performed every year.  The priests, even the High Priest, had plenty of opportunity to become used to the holiness and power of the place – so how did they, each in their own lifetime, let alone generation after generation, manage to preserve an appropriate level of concern?  Partly it may have been through practices that served as visible reminders that the Tabernacle was not just any old space, such as the lowering of workmen in baskets from the roof to do any necessary repairs in the Holy of Holies (Mishnah Middot 4:5), rather than them simply walking in as they would to any other job.  Another key part may have been the telling and re-telling of the story of Nadab and Abihu, adding a personal dimension that brought the danger home: Rashi imagines a doctor giving advice on what to avoid for one’s health, rendered more effective by the formulation “don’t do such-and-such, lest you die like so-and-so.”

This is why safety campaigns often spring from one family’s direct experience of tragedy, or why it matters to hear about real people affected by the current war in Ukraine: making it personal can help us to sustain active concern when faced with day after day of news reports.  Finding the correct balance can be tricky: becoming blasé about real danger is not helpful, but neither is it ideal to have our lives shaped by fear.  Paranoia about bee stings may not dictate the whole plotline of our lives, but each of us does have to find a working balance between alertness and indifference: without needing drama worth of a Regency romp to bring us to our senses, may we each find our way to a happy ending where concern only energises and comfort empowers us.