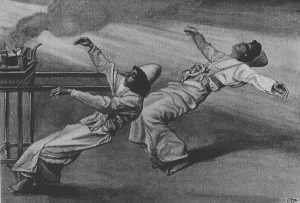 It seems to me that we are living in a very difficult time for progressive religions generally, and for progressive Judaism in particular. Progressive Judaism arose principally in Germany, with the values of the Enlightenment at its core. It minimized or disowned traditions that couldn’t be supported by rationality, and focused on a Jewish mission of improving the world through values that it shared with like-minded people from other religions. The rabbi of the congregation I grew up in, Rabbi Herman Schaalman, who died only a few years ago at the age of 100, had a rich knowledge of Jewish tradition, but this was virtually never demonstrated in the life of the congregation. No head coverings were worn, no tallitot were in evidence, and the liturgy was sung by an operatically trained cantor accompanied by organ and, on the High Holidays, by a professional choir hidden in a loft. When I did my cantorial training at Hebrew Union College in New York, it was a matter of considerable interest and some controversy that my fellow students wore kippot and tallitot, and many traditional practices became increasingly common. And over those same years, social action to improve humanity seemed to move from the religious sphere to the secular sphere. It became more and more possible to be a secular Jew, as it became similarly possible to be a secular Christian; atheism, which in the 1950’s had been a controversial issue, became not only accepted but expected. The civil rights struggles in the United States saw combined social action from many religions, Judaism among them, but it was clearly no longer necessary to begin with religious ethical commitments in order to participate in the improvement of society. These developments left the progressive Jewish community in an increasingly difficult position. With the appeal of prominent traditional Jewish communities on one side, and the many opportunities in the secular world to improve society and the environment on the other, progressive Judaism had to negotiate a path between acknowledging the value of ritual and tradition on the one hand, and crafting a particularly Jewish approach to tikkun olam on the other. But this masked an even more crucial issue: Judaism has often been described as a religion of deed, not creed, and as progressive Judaism becomes less concerned with ritual observance, but still not coercive with respect to belief, it is not easy to articulate an authentic Jewish vision that can be heard above the clamor of political activism and religious conservatism. This situation, arising out of the entry of Jews into the larger community, is a modern development. But the underlying contradictions that lead to it are ancient, as this week’s Torah reading demonstrates.

This week, we read the combined portions of Acharei Mot and Kedoshim, and they demonstrate this difficulty. The first of them, Acharei Mot, begins with a reference to the death of Aaron’s sons Nadav and Abihu, recounted originally in Leviticus 10:1. They had offered “strange fire” to God, which God had not commanded. We aren’t told precisely what they did that was so heinous, but clearly the rituals surrounding the sacrificial system were so important that failing to do them precisely was serious enough to result in death when they were not kept. In this week’s portion, the reference to the death of Aaron’s sons is followed by a description of Aaron’s garments as he presents offerings to God to make atonement for his sins, those of his family, and those of the whole House of Israel. These rituals were clearly crucial to our people in early biblical times. But of course, biblical Judaism was not solely concerned with ritual, and this is clearly shown in the second of this week’s portions, Kedoshim. It comprises the holiness code, a group of commandments that combine the ritual and the ethical. On the one hand, we have commandments that certainly fall into what we today would consider ethical considerations: the commandments to fear one’s father and mother, not to make idols, to leave the corner of the field of harvest for the poor and the stranger, not to steal, lie, oppress the stranger, withhold the wages of a worker, curse the deaf nor put a stumbling block before the blind. These are powerful statements of ethical integrity, backed by God’s identification with them. Don’t do these things; I am the God who commands them.

But alongside these ethical commandments are commandments that can hardly be understood, much less justified, today. The commandments not to sow a field with two kinds of seeds, nor to wear a garment of mixed stuff. These commandments may have represented something deeply important to people in the time of the Torah, but they don’t make sense today, and they don’t appear to provide an ethical statement at all.

There is another element present in our reading that may illuminate a way forward for progressive Judaism. In the first of the parashiot we read this week, we are told of the rituals that marked Yom Kippur in biblical times. In addition to the sacrifices, the High Priest said aloud a confession of sins, his own, those of his house (understood by our sages to mean the entire community of priests), and those of the whole House of Israel. And indeed, confession forms the core of all of our prayers on Yom Kippur. Maimonides elaborates on this, in Hilkhot Teshuvah, as quoted by Nechama Leibowitz: “He must pronounce the confession with his lips, and express what he had made up in his mind concerning these matters.” But these confessions need to be said aloud.

Rabbi Joseph Soloveitchik, in his work on repentance, explains that “there are many things that a person knows and even thinks about, but lacks the courage to speak about.” Such a person, he continues, builds a wall between himself and his ego. The process of confession forces a person to see things as they are.

Progressive Judaism offers the opportunity to speak the truths of the values we inherit as Jews. It allows our ears to hear what our mouth is saying, and connect to the rituals that have meaning, as well as the values that are our heritage as Jews.