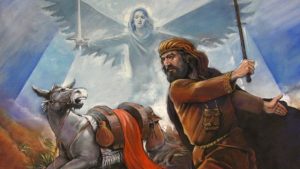 Parashat Balak: The Sword Between Our Eyes

This week’s Torah portion, Balak, tells the story of the prophet or sorcerer Balaam. Having just witnessed the defeat of the Amorites by the sword of Israel, the Moabite King Balak, fearing a similar confrontation and conclusion, summons Balaam to curse Israel. The Torah provides little biographical information about Balaam, though we are told his parentage and the place where he resides. Here the text makes clear that Balaam is neither Israelite, Moabite or Midianite; he is an outsider with a reputation as a diviner able to levy curses.  It is for this reason that Balak sent for Balaam; in order that the scales of any potential confrontation be tipped in his favour. However, Balaam warns Balak, “I can only utter the word that God puts into my mouth,” and thus, much to the anger and frustration of the king, Balaam goes onto bless the Israelites.

When initially petitioned by Balak’s dignitaries with promises of riches, Balaam clearly explains that, “though Balak were to give me his house full of silver and gold, I could not do anything, big or little, contrary to the command of the Eternal One my God.” He then requests that the dignitaries stay the night whilst he, “finds out what the Eternal One may say to me”. Verses 9-12 also imply that Balaam is unfamiliar with the Israelites and their status in God’s eyes. From these verses one learns of  Balaam’s complete devotion to God; Balaam makes numerous efforts to consult with God and no amount of material wealth or comfort will convince him to deviate from the path of God.

It is interesting that, despite the oft-non-judgmental tone of the text, rabbinic literature often portrays Balaam as a villain and seeks to denigrate his character. The Talmud refers to him as “Balaam the Wicked” and tell us that he engaged in bestiality with his donkey (Sanhedrin 105b). The Talmud also emphasises Balaam’s apparent hatred for Israel and his unwavering desire to destroy them. Rashi, writing in France in the eleventh century, understands Balaam’s remarks about gold and silver as being indicative of his inherent greed. In this interpretation, Balaam is saying to himself, “Balak should give me all his silver and gold as I am his only certainty to conquer these people”. The Spanish/Egyptian rabbi, Moses ben Maimon, Maimonides, accuses Balaam of deliberately desecrating the name of God by misleading the Moabites and Midianites into thinking that God had (eventually) granted him permission to curse the Israelites.

Why are the rabbis so keen to besmirch Balaam’s character? Whilst the text does not exonerate his actions he hardly comes off as the villain. After all, he only acts after consulting and in accordance with God.  A simple explanation might be that the rabbis are unsure what to do with a non-Israelite who can talk with God. Perhaps, the above interpretations reveal Jewish anxiety when confronted with non-Jews who seem able to be in direct contact with God. Indeed, the Torah offers very little explanation as to why the Israelites were singled-out by God over the other nations. So vexed were the rabbis by this lack of reason that the Talmud includes a story of how God offered the Torah to all the other nations of the world but only the Israelites were willing to accept it unconditionally.

This critical reading of Balaam is even more dramatic when read alongside the concluding chapter of this week’s Torah portion. Here, after engaging in sexual relations with Moabite women, the Israelites turn away from God and begin to worship Baal-Peor. Perhaps the rabbis fear elevating Balaam in case we too begin to turn away from God towards other sources of inspiration.

This is a tension that persists today. It is the delicate act of defining boundaries in a world of diversity. The other extreme, isolationism, comes with risks of its own. In our Torah portion, total isolation is shown to have destructive and disastrous effects. Balak fears a people he  knows only by reputation and takes preemptive steps to destroy them; Balaam, unaware of the world around him, fails to take responsibility and follows blindly after God and after Balak; the Israelites are so detached from the neighbouring Moabite culture that when the two finally meet calamity strikes them both.

Tragically, versions of our Torah portion play out around us on a daily basis; between different countries, politics and religions. Even within the diverse body of Jewish communities we see people favouring isolation as opposed to communication and exchange. Some groups are afraid that contact and engagement will lead to the contamination of their ideology and a corruption of their conscience and moral code.

Frightening though this may be to some we need to muster the courage to encounter  people who hold different things to be true.   For the human endeavour to succeed people of all different backgrounds and beliefs need to work together in order to flourish. I fear that if we do not do more to bridge the gap between us and our fellow-humans, we will be like Balaam; unable to see the angel of death until the sword is right before our eyes.