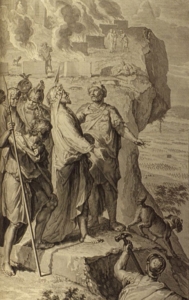 Each and every morning at the shacharit service, we hear a very small part of this week’s portion. Mah tovu ohalecha Ya’akov, mishk’notecha, Yisra’el, we say, “how goodly are your tents, O Jacob, your dwellings, O Israel.” Intended to express the worshippers’ happiness to be entering the sanctuary, and their reverence for the Divine Presence therein, these words we speak so happily are slightly outside of their original context.

Our portion this week has three main players: Balak, the king of Moab, Balaam, his court sorcerer, and, of course, the Eternal One, our God.

Balak, having seem the Israelite victory over the Amorites is somewhat panicked; he’d wanted to go to war against them but now he thinks that perhaps he had better not, for fear that they are too powerful to beat. Instead of even risking finding out, he sends Balaam to curse the Israelites. Initially, God forbids Balaam from accepting the orders of his master, telling him “you must not curse that people, for they are blessed.” There is much toing and froing, and the only mention in Torah of a talking donkey, before God allows Balaam to go so long as he agrees to obey God’s orders, rather than those of Balak.

In Moab, Balaam tells Balak that he will need seven altars; upon each of which a bull and a ram needs to be sacrificed in order for the curse to be effective, but having spoken to God, Balaam is unable to curse the Israelites and instead pronounces blessing on them. Balak is infuriated, and takes his sorcerous prophet to two other places, where the very same thing occurs.

Sidestepping the story a little, it is interesting to note the names of the protagonists of the story: Balak, and Balaam. Throughout Torah, names play a very important role, and they offer us some insight into either the character of the bearer, or the content of their narrative. Balak, destroyer, and Balaam, curser of nations, never get to fulfil the destiny of their name.

Why though might this be? Why did God prevent Balaam from pronouncing a curse on the Israelites? Why was it necessary to turn Balaam’s curse into a blessing instead of just shielding the Israelites from it?

According to Nehama Leibowitz, some commentators suggest that this was done to teach Balaam a lesson, that he was not his own master. No foreign rituals (eg: the building of seven altars) could prevail over the Eternal One, the supreme sovereign. Balaam thus had no choice but to utter the words the Almighty had put into his mouth. We might also consider that a further reason for God’s turning the curses into blessings was to benefit the Israelites, who, having spent so long in Egypt where there was sorcery in abundance, might have understood Balaam’s curses seriously and have become demoralised or, worse, lost belief in God. If this were true, then they might also feel uplifted by his blessings.

Isaac Abravanel, a fifteenth-century Torah commentator, suggests that God was indeed concerned for Israel’s safety, and believed that had Balaam effectively cursed Israel, the surrounding nations would have plucked up the courage and gone to do battle with Israel on the strength of his curses. In that light, he believed that when they heard how God had turned curses into blessings, they would then realise who was the real Master and thus lose all desire to fight God’s blessed people.

It is possible however to believe that Balaam simply did not have within him the power either to bless nor to curse. The blessing was effectively redundant because God had already blessed the Israelites, and the curse was ineffective anyway. Why then did God prevent him from issuing a curse at all? According to Yalkut Me’am Lo’ez, it was because “having foreseen Israel’s future sins and punishments, God did not want the nations to say, ‘It was Balaam’s curse that caused it.'”

Ancient civilisations believed that a curse was much more than a simply expression or wish for evil; it was also considered a method of physically translating such harmful efforts into reality. The Babylonians believed in the power of curses and relied on professional sorcerers to curse their enemies before battle, and so too did the Israelites believe in curses. Even God seems to have been troubled by Balaam’s potential actions and decided to compel him to bless the people instead – the Torah gives us an insight in this instance into the serious nature of pronouncing curses and blessings in Israelite culture.

Three questions come out of this week’s portion, for me:

When we enter the space, any space, we have set up for worship, and for prayer, and we hear those words “mah tovu ohalecha Ya’akov, mishk’notecha, Yisra’el”, we are immediately reminded of Balaam’s blessing. Whatever time of day we come into that space, we bring with us the baggage of the outside world – our stress, our concern if we’ve just read the news, our worries about things we feel aren’t within our control – maybe, because of all those things, we feel accursed, or we feel like lashing out ourselves and cursing. Maybe just the mah tovu is enough, or maybe we need a little more, but I hope we can all find a way to be like Balaam and hear in that space and time the voice of God, and turn our potential curses into blessings.