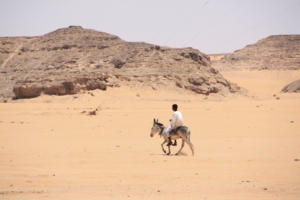 Parashat Balak – “It is the innocence which constitutes the crime.”

Parashat Balak has had a very mixed reception. For some it is their least favourite Torah portion. There is indeed not much to like when the story starts, as Rabbi Danielle Leshaw argues, with a number of men who do not take ‘no’ for an answer, and ends with destruction. Yet, I have always read it as a bit of a farce about an ineffectual seer, who dithers along the way, but saves himself by blessing the Israelites four times.

The story is told with a fine sense for drama and character. Especially the scene of Balaam and his donkey on the road reads as a film scenario. It starts with a wide shot: Balaam on his donkey. The camera then turns to reveal the angel standing in the road with a drawn sword. The shot moves back to the innocent Balaam on a petrified donkey. At this point, the music builds up tension until the denouements, first between Balaam and his donkey and then between Balaam and the angel. The only disappointing part is the ending, as it is identical to the start: a wide shot of a man on his donkey.

As for characters, the story is set in motion by Balak, the Moabite king, who is afraid of the multitude of Israelites. He talks of them as though they are brute animals. In him we have our traditional villain. The solution to his problem speaks of an enormous respect for the power of words. He trusts that a curse can destroy and he is upset by the blessings for those words have power too.

Balaam is a more ambiguous character. For some, he is the hero of the story, though he was not for our rabbis. They retrospectively put him in Pharaoh’s court and in charge of killing the Hebrew baby boys. To me, he appears most of all as, if you’ll forgive the pun, a bit of an ass, especially at the start of the story. Going to God with the same question twice and hoping for a different answer the second time is not a great move, especially not when the repeat request is inspired by the promise of riches. What is more, his immediate response to the donkey’s obstinance is violence. When the donkey diverts from its path, he beats her. When she speaks, he does not listen, but counters with a ridiculous threat.

God also appears as a character in this story, as does God’s angel. They are threatening and impatient to make their presence felt. Most of all, they appear somewhat erratic. In the night, God tells Balaam not to go, yet when asked again, he agrees with him going, only to be angered the next morning when Balaam gets up and goes. God’s angel stops Balaam and almost kills him, but then lets him continue on his way.

The donkey is by far the most sympathetic character. She is the only female and stands out in particular for her moving reply to Balaam’s beatings. When she is given the power of speech, she appeals to their relationship and reminds him of her loyalty: ‘Look, I am the ass that you have been riding all along until this day! Have I been in the habit of doing thus to you?’ Balaam has to admit, ‘no’. (Numbers 22: 30)

My attention was first drawn to the absurdities of the story by the rather hilarious retelling of the story by the Polish philosopher Leszek Kołakowski. Kolakowski points out that everyone acts to their best knowledge. Thus, as is common in slapstick, all are acting according to reason and yet they are acting at cross purposes. Kolakowski is at his funniest when he imagines the conversation between a sweaty, mumbling Balaam and a cantankerous angel. Balaam desperately tries to understand how he sinned, because he should have seen when he could not see. He is even more confused when he is told to continue on the same way. Why did you stop me, Balaam wants to know. Stop philosophising, the angel grumbles. This is God’s will.

The retelling becomes more serious when the donkey is given the last word.  She sighs that she is the real victim. Her master suffered a moral inconvenience, but her back hurts. It turns even darker when Kolakowski sums up five morals of the story. Number two is: ignorance is a sin, and when we justify ourselves with ignorance, we add a new sin to the old one. These words, for me, resonate with a powerful sentence from James Baldwin’s The Fire Next Time (1963). In a letter to his young nephew Baldwin tells about the destruction that has been brought upon black lives and writes, ‘It is the innocence which constitutes the crime.’

‘It is the innocence which constitutes the crime.’ These words have been on my mind ever since I read them first. They haunt me at times. Like other progressive people, I like to think myself on the good side of history. I would like to be on the side that recognises discrimination and suffering and the side that celebrates diversity. Yet, how can I be, if I don’t know what I don’t know and when that is my crime. If my sin is Balaam’s sin and, like him, I don’t see what I don’t see. It seems an impossible task. Perhaps we are making jokes, not because the story of Balaam is so foreign to us, but rather because it comes too close.

There is no easy solution to this difficulty. We have to acknowledge the limitation of our knowledge and of our vision. We have to realise that our innocence can hurt others. The best we can do is create spaces where it does not take a violent angel to make us see, but instead one where the words or even a mere movement of a donkey suffices. Spaces where the donkey is heard and where she gets credit, rather than a beating. Spaces where it is possible to acknowledge that you are wrong, even when you don’t yet fully understand why. Spaces that allow you to take ‘no’ for an answer. To create and find such spaces may allow us to turn a curse into a blessing.

Endnote: Leszek Kolakowski’s ‘Balaam, or the Problem of Objective Guilt’ is published in Tales from the Kingdom of Lailonia and the Key to Heaven (1989).