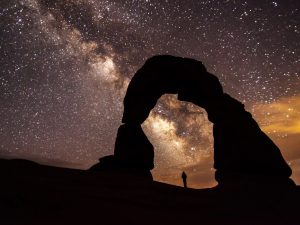 How lovely are your tents, O Jacob

Balaam was nervous. He rode his donkey to the steppes of Moab. The donkey trotted slowly in the desert heat, weighed down by Balaam’s travelling bags. Balaam looked this way and that, up and down at the craggy mountains, and back to the land he’d left behind. He fiddled with the donkey’s harness, twitching at the leather straps.

“There is a people that came out of Egypt; it hides the earth from view, and it is settled next to me,” King Balak had told him. “Come now, put a curse on them for me, for there are too many of them for me. Maybe, with your help, I can defeat them and drive them out of the land. I know that whoever you bless is blessed indeed, and whoever you curse is cursed.”[1]

It was true. Since childhood, Balaam had known he had a gift. Whatever he said came true. The right words just came out of his mouth and took meaning. As an adult, Balaam had become something of a blessing mercenary – offering prayers for kings across the world in exchange for payment.[2] Normally, he turned up, said the words, and left with enough money to feed his family for a few more weeks.

But this time was different. Before being asked to curse the Israelites, Balaam had never heard of them.[3] Then, the second he’d been asked to curse them, their God appeared before him. God told him: “Do not go with them. You must not curse that people, for they are blessed.”[4] Initially, he’d refused, but King Balak had been insistent. Mercenaries cannot say no to kings. So he agreed.

Balaam sidled up to the edge of the valley where the Israelites were camped. He looked out over all their tents, pitched in the desert. He saw the speckled silhouettes of people wandering about between the marquees. He opened his mouth to curse them. But the words to curse weren’t coming. Every time he tried to curse them, his tongue dried up and stuck to the roof of his mouth. He felt a heavy marble in his gullet, choking up all his words. Then, from somewhere outside of him and deep within, a voice came out of his own mouth:

“How lovely are your tents, O Jacob, your dwelling-places, O Israel.”[5]

To this day, those are the first words Jews say on entering a synagogue. We Progressives sing them together when we begin our services. Orthodox Ashkenazim recite them as they approach a community’s door, or even idly walking past a shul.[6] Why is it that the words we say when we come to a synagogue are the words of a non-Jew, who knew nothing of the Jews, but was somehow overwhelmed by the Divine Spirit? What has made us decide to use this blessing in such a way?

I suspect part of the answer is that, when we go into a synagogue, all of us feel like non-Jews. Whether we attend shul weekly, or only turn up for Yom Kippur, something about the space can make anyone feel not quite Jewish enough. We can all feel like we are saying somebody else’s words, tentatively mouthing out sounds that don’t quite feel right.

I rarely meet Jews who feel completely comfortable in their own Jewishness. Everybody feels excluded in some way: not quite learned enough, not quite spiritual enough. A stranger recently told me he was just not quite brave enough. Being a people who don’t belong is hard enough without worrying who belongs to that people. Many people have come up with their own definitions for what makes a Jew Jewish, but my favourite is: a Jew is somebody who worries they are not quite Jewish enough.

This prayer goes some way to honouring that feeling. All of us, no matter how observant or learned, recite the words of a non-Jew who has been bowled over by Israel’s God. The prayer reassures us: you may feel like you don’t belong, but you are home.

I used to wonder if I would ever reach a point where I felt like I knew enough. As a teenager, I stumbled over Hebrew words as the people around me seemed to recite them so confidently. I thought that perhaps when my Hebrew was good enough I would feel secure in my Jewishness. Then, having learnt Hebrew, I realised how little of the Torah I knew. I thought that if I could only master the Scriptures, I wouldn’t worry if I belonged.

Last week, I finished my examinations for my first year at rabbinical school. Our teachers assessed us on sections of Talmud, Hebrew grammar, Aramaic language, leyning the Torah, philosophy and biblical criticism. As I came to the end of them, I realised how much I still did not know. The rabbinical course gives us the tools we need to be able to explore every part of Judaism, but it cannot fill us up with everything. Our religion’s traditions are too diverse; our interpretations too vast.

I have come to embrace that feeling. Judaism is a bit like star-gazing. You lie on your back and set your eyes above you. You realise there is no way you could ever count all the stars you see. After a few moments, your eyes adjust, and you realise that there is another layer of stars behind the ones you couldn’t count. Suddenly, you’re humbled as you realise you’re facing upwards to infinity, beyond an entire galaxy with no end in sight.

This is our Judaism: layers of complexity reaching out to infinity. All we can do is stare at it in awe, flummoxed by our God, and say: “How lovely are your tents, O Jacob, your dwelling-places, O Israel.”[7]