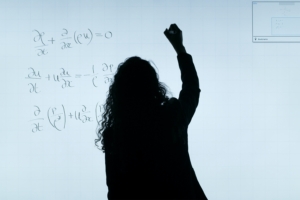 Numbering with Care: The Loving Arithmetic of BeMidbar

This week, we begin a new book of Torah: BeMidbar (“in the desert”) in Hebrew and Numbers in English. Our parashah shares its name with the book, and it does what it says on the tin: We are in the desert. And there are numbers. Lots and lots of numbers. Wandering in the desert with lots of numbers is a bit of a nightmare for somebody who has always struggled with basic arithmetic. However, I have bravely forged through this mathematical desert in order to extract some Torah from all these numbers (something that would have sent my teenage self running in the opposite direction).

The numbers in this week’s torah portion refer to a census. In this case, one that Moses and Aaron must take of Israelite men over 2o years of age. This year, in my sociology class, “Understanding Jewish Communities,” which was taught by Dr. Keith Kahn-Harris, we discussed how counting people often has the ultimate goal of policy-making. The gathering of numbers gives us information about people who interest us and enables us to make decisions about how to relate to them. Whilst some might assume that turning people to numbers is sinister, dehumanizing and alienating (and certainly, it is difficult to forget that at many points in our history and present, this has been the case), counting people can actually be an important tool that allows us to care for large groups of human beings. In the right hands, counting people helps us learn about those whom we serve and directs us as to how to best serve them in the future.

The commentator Nachmanides notes that the verb that BeMidbar uses for Moses, Aaron and their delegates’ process of recording their survey results is “PaKaD.” This verb has a wide range of meanings, including, but not limited to, “to appoint,” “to attend to,” “to visit graciously,” and “to pay attention to or observe with care.” Those readers who use Forms of Prayer regularly might recognise it from the Amidah, where it is used in connection with the matriarch Sarah: “PoKeD Sarah” – “[the One who] remembers Sarah.” This is an allusion to the moment in Torah when God takes note of Sarah and she becomes pregnant with Isaac after many years of struggling with infertility. In the case of Sarah, “PaKaD” is clearly about love, care and attention. It is the opposite of dehumanisation. It is about attending to a woman’s pain and responding with the appropriate support.

The census in BeMidbar appears a far cry from Sarah’s experience. Moses and Aaron do not seem to be engaged in bringing new life into the world: they are counting the men in Israel who are able to bear arms. They are counting those able to bring death, not life. If their census is for policy-making purposes, those purposes are military. I would suggest that it is no chance that the Torah uses the word PaKaD in this case. War is one of the avenues in our lives in which it is so easy to forget the humanity of each individual. Whether we are thinking about our own troops, the troops of others, or civilians caught up in military conflicts, it is much simpler to reach for the abstraction of numbers. When we deal with birth, our default is to focus on the uniqueness of the newborn child and the sanctity of life, especially new life. When we deal with war, our default response is the opposite: to forget the uniqueness of each life and its sanctity. Anything else feels soul-crushing and hopeless. In war, focusing on numbers enables us to shield ourselves against despair and disgust. The Torah permits us no such shield. When Moses, Aaron and their delegates count potential soldiers, they must take note of them. They must pay attention to them with love and care. They must remember each and every one of them, as God remembered Sarah. And they must allow this to guide their policies.

At the time of writing, we are 88 days into the war in Ukraine. When those of us ensconced in the safety of our home countries read the news, we are bombarded with numbers. A skim of today’s Guardian yields phrases like “12 people killed and another 40 wounded,” “2,439 Ukrainian fighters have surrendered,” and “rockets and artillery hit 583 areas.” A unanimous count of the civilian death toll since the beginning of the conflict is difficult to come by, but I have found numbers ranging from 3838 to 25 067+. At the beginning of the month, the UN Refugee Agency said that over 5.5 million Ukranians had fled the country, which is 10% of the pre-war population. I admit that lately, after 3 months of conflict, I skim-read the news over breakfast and then go on with my day, shrugging that there is nothing new under the sun. I am sure I am not alone. Numbers can calcify our hearts and make us forget our capacity for empathy. So in the first instance, I call on myself, and all those who relate to this sentiment, to resist the abstraction of numbers, to PaKaD, to remember, that each number represents a human life. But if this is important for those of us who have a level of distance from the conflict, how much the more so is it important for those who, like Moses, Aaron and their delegates, send their troops out to fight. It should always be done with care, attention and full acknowledgement of each human life. It should always be done via PaKaD. If we lived in a world where those in positions of power took note of the casualties, or potential casualties, of war with the same kindness that we offer newborn babies, what a different place it would be.