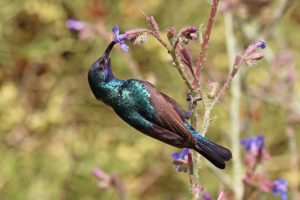 Parashat Beha’alotcha starts in quite an uninteresting way. First we read about the purification of the Levites, then we read about the ritual impurity that Priests are susceptible to whilst being in the presence of a deceased being, then to hearing about the Pesach ritual.

In Numbers 11 we read something that we might perceive as something completely different from the preceding narrative about purity and the ordinances for Pesach. Here the people of Israel are fed up with having to eat everyday המן הזה, everyday that exact same thing.  In verse 6 it is mentioned that their “soul is dried away, there is nothing at all”. As a side note, the narrative details that the people of Israel decided to make lush cakes with it – something very tasty, since it particularly mentions it was enriched with oil. Still, the day after, the people were distraught over this unkindness – everyday that exact same thing.

God became angry, Moses anxious. What is there to do about this great injustice, this horrible suffering of having everyday exactly “that same thing”?

The narrative turns interesting now. Moses pleads to God by saying: “have I really deserved such unkindness from you? Your servant? Do you really dislike me that much?”[1] Moses continuous by saying: “did I gave birth to these people? Did I raise them? For if that were true, you should have instructed me, then, to wean them as a nursemaid[2]”. Not only did Moses base this statement on the creating attributes of God, he also reminds God of his inabilities; “where would I get this meat from? Seriously. And just so you know, I have no energy anymore, I feel I can’t give anymore – I have nothing left to give, I wouldn’t mind giving it all up….I am done”.[3]

The following question beckons: “which complaint is fair?” Everyone is ganging up on God. The people of Israel as well as Moses – God’s mouth-piece to the people.

God responds in clear pithy instructions. God instructs Moses to gather 70 elders in the tent of gathering, so that they are with Moses and they are made to understand Moses’ burden. The words of God are not the finest. The people of Israel will get their meat – and they will suffer for it. They will suffer for it greatly! All of a sudden that boring introduction becomes relevant. 1) Clean yourself of impurities. Focus on yourself. Reflect on yourself  before dealing with the other – that most delicate other. 2) We are not after physical or mental death. The urge to witness that or be part of it, is inexcusable. 3) The ritual purity and the respect of one’s life and wellbeing should allow for a truly hospitable gathering on Pesach, where also the people not belonging to the community are invited too.

Moses’ objection and plea to God is therefore a sensible one. For it wouldn’t have made much sense to make a person like Moses a leader. He didn’t want to do it in the first place. Moses has endured a lot and to then be confronted with people who would like to return to their status as slaves because the food was better – seems outrageous to Moses.

Although the People of Israel are expressing similar “visible” complaints, the underlying anxieties are different. Even though both the People and Moses seem to reject the current situation, Moses’ anxieties run much deeper as is expressed in verses 14 and 15: “14: I am not able to bear all this people myself alone, because it is too heavy for me. 15: And if you [would persist on] doing this to me, then please kill me now. At least then I will not have to suffer anymore.”

Moses’ expression of reaching his breaking point is personal and heartfelt. God responds to Moses’ feelings and anxieties immediately by creating a support network for Moses. God is also showing Moses that he supports him on a more personal level by not only giving the People their meat; but by punishing the People in giving them an abundance of meat – to show them that every action has consequences.

Moses’ expressions in this week’s reading reminded me of a French song I love:[4]

Here is the SOS of a man in distress

I’ve never had both feet upon the ground

I’d rather be a bird

I don’t fit into this skin

I’d like to see the world turned upside down

If ever it were beautiful

For me the message of Beha’alotcha (when you step up) is not to necessarily stand up to people or institutions we dislike or who treat us unfairly. For me, what I read through these lines here, is that the message is more reflective. It is about stepping up to and for yourself. It is hard enough to know that we have personal problems. But when we realise we have them, it seems, following Moses’ example, that the only right thing to do is to take care of ourselves, to ask for help, to ask for support.

[2]     The Hebrew employs the masculine form אומן, whereas a nursemaid would be אומנת. I decided to reflect, what I consider, Moses’ intentions rather than to substitute it for an equivalent.