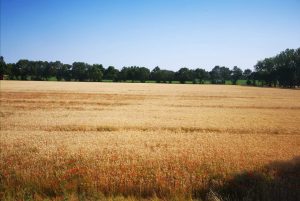 A few weeks ago France went deeper into confinement.

The sun gently warmed the closed window panes in my kitchen. The sound of the cars and the crowd was silent and gave way to the song of birds in empty streets. Time seemed to be suspended.

I was alone with my 3 year old daughter and we planted in a pot, white beans that we had germinated. Pleasure of the smell of the soil, to seize the soil with full hands …

I immediately thought of the Parashah Behar-Bechukotai and its beginning on the agricultural laws of shemitah, the sabbatical year. Every 7 years, farmers had to leave the  land uncultivated fallow. Nature then took back its rights there, a bit like the deserted streets of Paris at the moment.

In Hebrew, the word culture (Tarbout) can be read in two different ways. This word has an the agricultural sense: to put in ground and to make grow, to fruit a field, the fruits of the trees and from a metaphorical sense it also means making something grow like a work of art, an idea, a trait of character, …

And this metaphorical reading is very important because the Bible attaches so much importance in describing laws which will not be relevant afterwhile just as the laws of the temple whereas the temple is destroyed, penal laws whereas since the Roman epoch the Judeans have no sovereignty and can no longer apply them, the agricultural laws which suppose a sedentary lifestyle when the Jewish people spent the majority of their existence in exile,…

In exile precisely, reading these texts in a metaphorical way has become absolutely necessary in this life full of suitcases and stony paths.

When we read these laws of agriculture metaphorically, again, let’s remember that the word “Adam” comes from “Adamah” (the soil, the clay) and that God asked him to cultivate the garden. Adam and Eve were not idle in Eden.

If “Adam” can be read literally as “soil”, Adam is therefore “his own soil” that he has to “make fructify”. In other terms he has to make himself fructify.

But what does it mean that Adam must “make himself fructify ” because he is “his own soil”? What then would be the fruits that Adam should produce from himself ?

In his book “7 meditations about beauty” the French academic poet François Cheng answers the question. “What is beauty?”

Beauty is not a simple ornament, he said. It is a sign by which creation tells us that life has a meaning. Through beauty’s creation, we suddenly realized that the living universe is not a huge neutral and undifferentiated entity. We can realize that it is driven by an intentionality. You may say that it is difficult to find beauty, but the presence of beauty is everywhere. A simple flower is a miracle. Why does a flower that blooms in petals reach this level of perfection in shape, color and fragrance? We never can be surprised enough about that.

Cheng goes on to say that “beauty only has meaning if it passes through the human soul”, thus echoing the Book Proverbs which says “The soul of man is the lamp of God, who directs his lights in the folds of the heart.”[1]

By asking Adam to “fructify himself”, God therefore asks him to wonder at the beauty of daily life, to become aware of the beauty that surrounds him and with it to produce something new just as in the case of a poem.

Maybe that’s the kind of fruit that God asked Adam to produce. He would ask him to produce “beauty” and therefore, always according to François Cheng, “meaning” to life.

The Bible and the vast majority of rabbinical texts are not written in the sobriety of civil code but in a poetic style. The metaphors are numerous because they are, in essence, an invitation to interpretation, to produce “beauty”, “to produce meaning”

The tender light of the end of the afternoon illuminated my daughter’s golden hair.

She was watching, delighted, the green shades of the leaves.

By suspending our time like as if in a “social shemita”, confinement offered us a golden moment.

The watering water from the can was raining on the black earth in the pot.

The scent of the wet soil enveloped us and mingled with the smells of neighboring bakeries spreading from window to window.

It was from our Parisian Eden that my daughter and I finally understood the happiness of “being” and not the rushing of “doing” several things, trying, inspired by Adam to make of this time something beautiful.