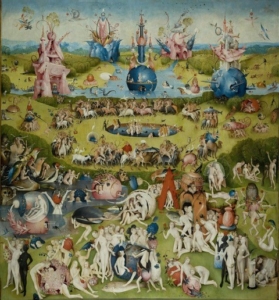 When I was sixteen, I participated in a youth drama and dance festival. The play I was in, was created by ten or so of us, all young women. We first wrote and then performed every scene.

One sequence in this play was about this week’s parashah. A first scene was called Eve-the-Apology. It was a short monologue, in which Eve could not say enough to try and make amends. She was so very, very sorry. This Eve was eventually pushed away by a second Eve, Eve-the-Real-Story. (‘That’s not how it happened and you know it!’). The second Eve explained that she was not around when man was told not to eat from the tree of of knowledge of good and bad, so how was she supposed to know? The sequence ended with a third Eve, ‘Eve-as-it-should-have-been’.

This week I was reminded of these scenes, because they are not just the creation of rebellious youth, but express a kind of weariness seen in different commentaries on this parashah. After millennia of blaming Eve for everything that is wrong in the world, we want to give her a better reading. We want to excuse Eve or make her the heroine the story, or even rewrite it all together.

I am not sure how it long it takes to challenge the long history of undermining Eve, though it should be noted that people have been doing so for much longer than is often assumed. One of my personal favourites is recounted in Christine de Pizan’s The City of Ladies, first published in 1405. Christine points out that Eve was made from a rib, not from a foot, so she could stand next to Adam, not lay at his feet. Eve was Adam’s companion, not his slave.

In what follows, I like to offer a different perspective, one that reflects on the nature of Eve’s conversation with the serpent. The conversation begins with a question. The serpent asks the woman what God has said: ‘Did God really say: You shall not eat of any tree of the garden?’ (3:2) The commentators in our chumash point out that the serpent does not quote God accurately, but instead asks a question, that requires a longer reply than a mere ‘Yes’ or ‘No’. The question thus functions as the start of a conversation. The commentators add that the reply of the woman is not accurate either. It exaggerates the prohibition, but may be what Adam told her. After all, it is possible that she did not know exactly what it was that God said, because she only heard it second hand. (And we are back to Eve-the-Real-Story.)

It seems then that imprecision creates the conversation. If the serpent had repeated the exact phrase, Eve’s response could have been a simple ‘Yes’ or ‘No’ and continue her walk. And had she known the exact phrasing, she could have stopped the conversation by correcting the serpent, rather than responding directly to its question. Yet, I wonder if it is not just imprecision, but also lack of understanding or perhaps simple curiosity that starts the conversation. Neither the man nor the woman was told why the commandment is there, only that disobedience was punishable by death. Could it not be that what the serpent and the woman are doing is trying to understand, trying to make sense of it all? They are wondering not just what the commandment is exactly, but also why it is there.

Making sense is something that we do all the time. It is not just the bigger events in our lives that provoke such conversations. We can try and make sense out of a need but also out of sheer curiosity or simple enjoyment. It is as if we cannot help our ourselves. I sometimes try to imagine what happened when God was cursing the serpent, cursing the woman, and cursing the man. Even while God was speaking angrily to them, did they not for a moment start looking at their make-shift clothes and thinking about shortening a hem, so that just enough of a leg would show or putting some extra padding elsewhere? Were they planning ahead, arranging their furniture in a house they would need to build? Were they thinking about how would they would tell this story to their sons or to each other?

After God’s angry words, Adam names his wife Eve, Chavah, which is derived from the Hebrew word chayim, life, because ‘she was the mother of all the living’ (3: 20). This naming reveals what it is to be alive. We cannot help ourselves. We laugh, we love, we talk. We are not static elements, but constantly creating and breaking and when doing so, making sense of our lives. In this time, when nature goes into hibernation and we seem to be waiting for things to change, this week’s parashah reminds us that we are sons and daughters of Chavah, that we are creatures, who are always starting something new, talking, making sense of who we are. We need to and we cannot help ourselves.