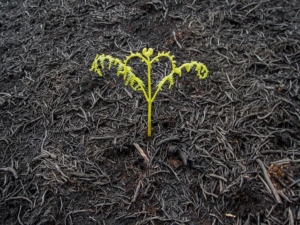 Setting your sigh-ts on new starts

I couldn’t resist the symbolism of writing about Parashat Bereishit as my first D’var Torah for Leo Baeck College. The neatness of beginning at the beginning appeals in a similar way to the enticement of the ‘fresh starts’ we embark upon at various junctures, full of good intentions. And this moment – the start of the Torah cycle, the first days of the Jewish new year, our slate newly wiped clean after Yom Kippur, but with the moral accounting we engaged in still fresh in our minds – is one of them. We set out on our journey through the Biblical year full of hopes and plans for how it might be a Shanah Tovah – a good year.

One might see this beginner’s zeal reflected in the way God approaches the very first year – ‘good’ is a designation we get a lot of in the first chapter of Bereishit. The phrase vayar Elohim ki-tov (And God saw that this was good) occurs five times in the famous day-by-day account of Creation that constitutes the first thirty verses of Torah. The judgement is applied, not in fact to each day, but respectively to the creation of earth (third day); plants (third day); sun, moon and stars (fourth day); birds and creeping things (fifth day); and other animals (sixth day). The repetition is emphasised by the chanting, which follows the same melody each time it appears – it is God’s refrain, a Divine work song for Creation. And at the end of the sixth day, having created men and women, God surveys the start that has been made with great satisfaction – v’hineih-tov m’od (and behold, it was very good).

But that is the beginning of the beginning. By the end of the beginning – the final verses of the parashah – the lustre has worn off somewhat. The aspect of Creation causing the disappointment? Humans, naturally. The words vayar Adonai ki (And God saw that), a basic pattern followed so consistently by tov (it was good) during the honeymoon of early productivity, are now paired with rabah ra’at ha’adam ba’arets (great was the evil of man on the land…). It’s a striking contrast. And it doesn’t stop there. V’khol-yeitser machsh’vot libo raq ra kol-hayom (…and that every intention of the thoughts of their mind was only evil, every day) hammers home the verdict of unmitigated wickedness with the repetition of v’khol… raq… kol (every… only… every) and the triad of words denoting mental process – yeitser machsh’vot libo. There is an almost melodramatic flourish to the way in which God pronounces mankind to be absolutely rotten to the core – like an artist dashing their painting to ruin on the ground, or tearing up their manuscript with cries of “It’s just no good!” Because God’s impulse, too, is wholesale destruction – emcheh et-ha’adam (I will blot out mankind).

Beyond stylised caricatures of artists with high standards and stormy tempers, God’s frustration here might be compared to the sense of despair we feel when our good intentions have gone awry – when we’ve fallen at the first hurdle; broken our promises to ourselves; failed in our commitments to others – no sooner, it seems, than we started. The gap between expectation and reality can become a yawning chasm that swallows both our aspirations and our imperfect attempts to approximate them in the ‘real world’ of flawed human beings. Is God sharing that experience?

Certainly, God is depicted as falling prey to very human emotions at this point – vayitatseiv el-libo (And He was saddened in his mind). This anthropomorphic moment is highlighted by the echo of libo (his mind) from the previous verse, where it was applied to people – we’re not just confronted with the Divine wrath that the Children of Israel will later be threatened with, but the melancholy of dashed hopes and disappointed enthusiasm.

We find, too, the miserable wish one had never started – vayinachem Adonai ki-asah et-ha’adam (And God regretted that He had made man) – a sentiment repeated in God’s voice in the next verse: ki nichamti ki asitim (for I regret that I made them).

But n.ch.m is an odd verb, translated depending on context as ‘to be sorry, repent, relent; be comforted’ – meanings that seem just a little contradictory. The passage would read very differently if we took it as ‘God was comforted because He had made man’ – planning to annihilate them (if we also reread כִּי as concessive rather than causal) ‘although I am comforted because I made them.’

There is surely poignancy to the idea that God’s pain at human immorality was intensified precisely because humans were also a source of comfort.

But it’s not the only time the verb is applied to God – it comes up again, translated as ‘relent from, renounce’ at another crisis moment of potential destruction, following the episode of the Golden Calf when Moses intercedes to stop God obliterating the people (Ex 33.13-14). V’hinacheim al-hara’ah l’amekha (Relent from/regret the destruction for your people), Moses says – and God listens – vayinacheim Adonai al-hara’ah asher diber la’asot l’amo (And God relented from/regretted the destruction He had said he would do to his people). Despite the different contexts, the first two words of the phrase exactly match the Hebrew in Genesis.

The root n.ch.m is traced to the meaning of sigh, and this might help us tie together its seemingly disparate manifestations. A sigh might be frustration, despair, a prelude to destruction; it might be a pause of pathos and pain; it might be resignation; it might be relenting; it might be relaxation; it might be a self-soothing summoning of courage. Bereishit ends on a cliffhanger with the introduction of Noach – who, in the next parashah, does not try and intervene for life on Earth in the way Moses does for the Children of Israel. Perhaps God’s sighing could have had a different outcome if Noach had been a different kind of tsaddiq (righteous man). Perhaps, when our fresh starts feel like false ones, a sigh is actually our chance to hold back from giving up on the whole project; to imagine intercession on behalf of our plans and hopes to improve ourselves and the world; and to continue in the knowledge that without accepting disappointment and failure along the way, we will never be able to sustain our sense of hineih-tov m’od – behold, it was very good.