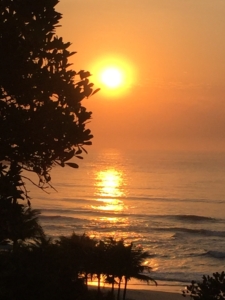 The reading of Parashat Bereshit brings us the immediate questions of when and where is the beginning. Especially, what was before such a beginning? Was there an end? If we look at the biblical text and consider it within the Jewish calendar, we may think that there was something before the disorder that led to creation. Maybe a tranquil ending, that caused chaos, and therefore, the need to organize the world.

The period of Chaggei Tishrei – Festivals of the month of Tishrei – is a mixture of endings and beginnings. The end of the Jewish year, and the beginning of a new one with Rosh Hashanah; Yom Kippur, facing death and choosing life; Sukkot, when we harvest the fruits, ending the season with prayers for rain during the next season on Shemini Atzeret; and Simchat Torah, finishing and beginning a new cycle of Torah readings.  For those who live under the Jewish calendar, this season brings a certain chaos to our lives, which are suspended by the many different and complex series of Chagim but must be resumed with the end of the season. We end the festival season and begin again from this wonderful chaos into a month devoid of Jewish festivals.

Life and death, ending and beginning are significant themes of the last festival of the season, Simchat Torah, in the Torah’s final parashah V’zot Hab’rachah, when we read of Moses’ death; and then immediately, parashat Bereshit. the creation of the world and its inhabitants.

My grandmother, of blessed memory, by the end of her life, used to collect stories of good ways that people died: sleeping, enjoying opera, during one’s birthday party… Certainly Moses’ death depicts the apex of those blessed endings: “vaiamut sham Moshe, eved Adonai, be’eretz mo’av, al-pi Adonai – So Moses, the servant of Adonai, died there, in the land of Moab, at the commandment of God” or, as explained by Rashi: by the Divine kiss.

Parashat Bereshit, this week’s parashah, marks another beginning of the Torah reading cycle with the sentence: “Bereshit bara Elohim et hashamayim ve’et ha’aretz. Veha’aretz haytah tohu vavohu – when God was about to create heaven and earth, the earth was a chaos, unformed”. The very first words of our journey tell us that the starting point of creation is absolute chaos.

In contrast to the disarray before creation that begins our sacred text, Moses’ death, the very end of the biblical text, depicts a very tranquil ending: looking at the land of his ancestors, he was gone by God’s kiss. The same life that is created in Bereshit by “nishmat chayyim” God’s breath of life, ended by God’s lips. Movement versus tranquility.

Movement or even the turmoil of the universe before creation, is what is suggested by Professor James A. Diamond as the impulse for the creation of the world. “The universe in its pristine state betrayed a disorganization and utter lack of order which God found intolerable and on which He felt compelled to impose order…. Perplexity is the catalyst for God’s creative impulses, who feels prompted to shape creation into something orderly, defined, planned, and imbued with wisdom.”

Bereshit brings order into the disordered universe, and then creation and life. We begin with the creation of light and an ordered world where living creatures will dwell. We end with the peaceful departure from life of the greatest leader of our people. Between death and life, end and beginning, lives the hope of a future land where we’ll find honey and milk, but there is also chaos and astonishment that leads us back to birth and creation. Torah, our Tree of Life, is like our own lives: we begin as we are borne, end when we die, and in the middle, there is a journey of innumerable cycles of endings and beginnings, and often we are offered the opportunity to begin anew from the chaos of our own past experiences.

As a new Jewish year and academic year begin, we also begin a new cycle of Torah reading. The beginning of Bereshit, according to Rabbi Tamara Cohn Eskenazi, “….[D]epict human development as a series of transgressions and transformations in which both God and Humankind discover and develop their relationship.” During this new year we will make good choices and bad choices; we will make mistakes and have to fix them; we will build new relationships and, hopefully, develop our old ones.

May we, during this new cycle, be able to shape the disorder caused by the chagim into an orderly, defined, and planned year, imbued with wisdom, significance, and spirituality. But may we also be open to new adventures, new experiences, and bright new beginnings that will bring some disorder and colour to our lives.