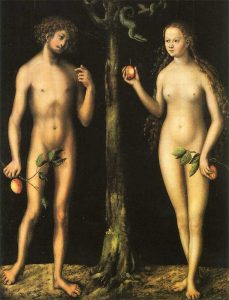 “These are the generations of the heaven and of the earth when they were created…” (Genesis 2:4).

This commentary is very surprising. How could the creation of the whole world depend on the merit of a single human being? And why would Abraham be this person?

Abraham may represent a certain way of relating to one’s own life and to the world. Abraham left his country on the command of the Eternal, and went to an unknown land that the Eternal had promised him. The “travels” of Abraham could picture an inner, psychological travel: Abraham was seeking to find a meaning to his life in the world.

The special “merit” of Abraham may have been his will to give a profound purpose to his life.

His spiritual quest seems to have led him to understanding the mysteries of creation. Indeed, we can notice similarities between the covenant between Abraham and the Eternal in chapter 15 of Genesis, and the scene of creation in Parashat Bereshit.

Abraham fell into a deep sleep, like Adam when Eve was separated from him.

Abraham cut animals in halves; the Eternal separated mixed elements during the act of creation. Indeed, Independent beings which would develop their own way of being could not exist when everything was mixed up. For example, the waters have been divided into different kinds of waters. Later on, the first human being has been divided into man and woman. Thus, when Abraham separated the animals in halves, he may have not only performed it in order to “cut” a covenant with the Eternal, but also as a symbol of his will to create something new.

Last, but not least, in Genesis 15, fire passed between the halves of the animals that Abraham had cut. It seems to be a material representation of the word “Bereshit” בראשית, which is composed of the Hebrew word “covenant”:  ברית, separated in two equal halves by the word “fire”: אש.

In the light of this comparison, it seems that Abraham himself was engaged in a process similar to the creation in our parashah. Indeed, the Eternal separated elements in order to form new beings. In the same way, Abraham was the father of several different peoples who consider him as their ancestor. Although these peoples all come from him and share things in common, they possess their own specificities and identity. However, they would probably not have developed the way they did if Abraham had not been in a covenant with the Eternal.

Thus, the world was renewed to a great extent because of Abraham and his search for meaning. During the night described in Genesis 15, the Eternal also revealed to Abraham what would happen to some of his descendants in the future. Thus, Abraham not only drew near to the secrets of origins, but he could also understand the future. Indeed, to understand what happens to us in the present and what is likely to be in the future, it is necessary to first explore and understand our past.

The act of teshuva, of repentance, implies this reflection on our lives. When we have bad behaviours, we need to meditate about our past in order to try and understand when, why and how we acquired these behaviours. This search is the first step to improve ourselves.

It may be the reason why, when Adam ate from the fruit that was forbidden to him, the Eternal asked him: “where are you”? Nothing is hidden to the Eternal. God certainly knew precisely where Adam was hidden. Rather, this question may have meant that Adam had lost himself; he did not know anymore where his place in the world was. Adam suddenly became ashamed of his nakedness; but why was it shameful to him, in a world where clothes did not exist and where all the creatures where naked? It meant that Adam did not feel at ease anymore in the world as he was. He felt he needed to change, to hide or to amend his vulnerabilities, he felt that something was wrong. The way to find again his place in the world was to till the earth from which he was taken and formed. This work that the Eternal assigned to him can be seen as an invitation to an inner travel, to a reflection about his own essence.

In the same way, when Cain killed his brother Abel, the Eternal asked him: “where is your brother?” The Eternal knew the answer. Rather, this question implied that Cain had lost his links with his brother and his fellow human beings. He needed to till the earth – that is to say, to reflect on his profound nature – even harder than Adam, in order to find again his place in the world. He was also made to wander the earth. Thus the Eternal sent him on a quest, to confront the world and to confront his inner essence, in order to reconnect with the world.

When the Baal haTurim says that the world was created thanks to the merit of Abraham, it may mean that Abraham succeeded in his quest to find a meaningful and enriching purpose to his life in the wider world. Because of this achievement, he could become the beginning of new civilisations and of a new era.

In the same way, every human being has a potential to start something new and enriching for the whole world – each of us, on our own scale, can contribute to the act of creation.