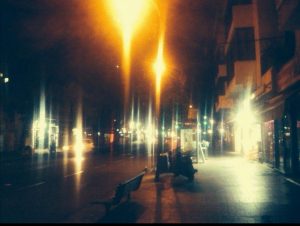 Some time ago I was in London. The dark, rainy night sky covered the entire city like a blanket. On the wet asphalt, the passage of cars seemed to make the entire street sigh.

The shadows grew longer as the headlights passed and mingled with the white neon lights of the Pressing Minute on the other side of the street, which beat like a pulse. The light was beating against the opening of my shutters, getting into my room, knocking at my sleep, at the same pulsation, all night long.

Early in the morning, I was listening to the birds chirping, while I was awake as in broad daylight, and I exclaimed ironically :

The emerging daylight diluted slowly the blinking of the neon sign.

In the calm room, a ray of sunlight seemed to cut the darkness like a blade. The time seemed suspended like the tiny grains of dust hung in the light.

Eyes open, I was thinking about the Torah and the transition of days and nights in the creation of the world … And looking deeper into the darkness, to Pierre Soulage’s painting. Fascinated by the black color , Pierre Soulage reveals to us in his paintings, that light can appear from black colour or rather what he names “outrenoir” in French (beyond black). Material variations allow light to cling to the streaks of paint and take shape as matter. A strange light emerges from these paintings whose colour is, in principle, a total absence of light …

I found in these paintings where light springs from deep darkness, a properly biblical dimension.

What exactly happens when they eat the fruit?

Adam and Eve do not only become capable of discernment, ie, as the root of the word indicates, (discernere) to separate on the one hand the Good and on the other hand the Bad because the text does not say עֵ֗ץ הַדַּ֙עַת֙ ט֣וֹב או רָ֔ע “the tree of the knowledge of good or evil” but עֵ֗ץ הַדַּ֙עַת֙ ט֣וֹב וָרָ֔ע “The tree of the knowledge of good and evil”[2].

Can the text suggest that Adam and Eve would be able to appreciate a situation not by calling it good or bad, but good and bad? That is to say, considering it in its complexity, its paradoxes and potentially both good and bad in the image of the light emerging from the black color of Pierre Soulage’s paintings?

In Hebrew, the expression that designates this pivotal hour when the light of day and the night merge is said: Bein HaShemashot, literally “between two suns”, as between two lightings which cannot be separated from each other .

In his book The Guide of the Perplexed[3], Maimonides associates the moral concepts of “good” and “bad” with the aesthetic concepts “beautiful” and “ugly”.

Of course, for us, it is not about relativising an ethical judgment but opening another possibility. Paradox is not relativism. Eating the fruit means to be capable of aesthetic judgment, that is, sensitive and subjective. It is knowing how to say: “I find it beautiful”.

It is also, according to Maimonides, accessing a different knowledge that is not the “reason knowledge” that God gave to Adam and Eve by creating them in his image.

The root צל of the בצֶ֥לֶם[4] (in the image of God) also means “shadow” and suggests that the first human being could have been created “in the shadow of God”. Eating the fruit of the tree of the knowledge of Good and Evil is therefore coming out of the shadow of God to entering in a world of sensitivity but into a world of judgment as well : good, bad, beautiful, ugly.

Until Adam and Eve ate the fruit, they were blissful in the garden and their symbiosis was perfect. Everything was provided for them, as in the belly of the mother, they were only asked to cultivate the garden[5], to pursue the work of God.

It is only when they had eaten the forbidden fruit, that “their eyes were blunted”[6] and they saw that they were naked. Their first reflex is then to sew loincloths.[7]  Why ?

Can we suppose that this episode bears witness to a prudish morality characteristic of the nineteenth century, and that the important point taught by this story is the confusion of Adam and Eve when they realized that their genitals were visible?

It can’t be so. By interpreting this story in a Victorian spirit we miss the point.

Then God does a surprising thing.

He gives them clothes.[9] But not just any.

It adds skin to the skin.

He adds to this “skin of birth” another skin that redefines their contours and their limits with the outside world.

This dialectic of separation in this first parashah of the Torah, this coming to the world arouses an existential anxiety because it confronts us with our own vulnerability, our own limits, but the deepest need of a human being is to overcome their own separation and exist as a subject.

The Torah thus links in an inseparable way the story of creation with the notion of independence and individuality but also of the coming birth to the sensible world.

By eating the fruit of the tree of the knowledge of Good and Evil, Adam and Eve emerge from the fusion with God and of one another towards each other to become fully themselves.

Just like us today, by becoming able to formulate a subjective judgment, ie to say “I think that …”, they also welcome the possibility of a different judgment coming from the other as a “reception of otherness”[10], they are able to look at each other in what of their face is unique, to say an “I” and to welcome a “YOU”[11].

They are then able to appreciate a situation in its totality, both good and bad, paradoxical and complex and to see, as in Pierre Soulage’s painting, light springing from the black.

The sun had shifted now and the ray of light had disappeared from my room. As diluted, a bland shadow was spreading over my bed and inviting me to open the shutters. It was time now to be born to this new day out of the Gan Eden that my room was, not with a fruit of the Tree of the knowledge of Good and Evil but the coffee from the machine snuffling in the kitchen.

[3] Maimonides, Moses The Guide of the Perplexed, chapter II