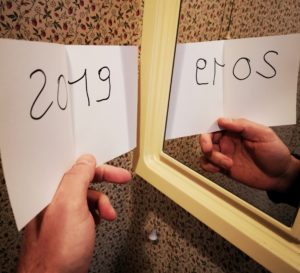 Since a few days, frost was back on our windows. The white sky was flaking in the air and the crystals covered the earth in a calming atmosphere … I warmed my fingers around a large cup of clear tea on which I was blowing. The surface was then wrinkled under the air, and troubled the white colour of the porcelain and the image of the letter Alef drawn in the bottom of the cup.

I thought back to Parashat Beshalach which traces the flight of the Hebrews crossing the sea, which opens like a cloak at the divine breath.

When we open the scrolls of the Torah on this passage and walk into history with the Hebrews, we notice the regularity of the lines become cloudy, the spaces between the words lengthen allowing to appear, not the white of a cup but that of the parchment. The very text disappears under the breath of God opening the sea like a dandelion flower on which we blow the seed heads.

God then raises the veil, reveals a tiny part of the nakedness of the infinite, the white of the spaces between the words which, in the text, manifests itself through a miracle. And when the Ramban wonders, “Why did God open the sea through a natural phenomenon and not directly?” One may answer perhaps because God only ever manifests himself veiled. In philosophical terms this dialectic of eroticism, of the nakendess of the meaning pursued, which is sometimes seen through a veil without us ever grasping it, is omnipresent in tradition.

In the Talmud[1], Rav Yehuda asks: “What does the high priest see on Yom Kippur when he is in the temple, in the Holy of Holies?”

The text, perhaps surprisingly, responds “he sees as woman’s breasts that appear under a veil (פרכת), visible and invisible”. Rashi points out that the breasts are visible under a cloth. It is not about nakedness, nor the breasts themselves that matter but the fact that we guess them.

This is a definition of what eroticism is : Roland Barthes, french philosopher, literary critic and semiologist  goes so far as to say in his book “The Pleasure of Text” that eroticism is “where the garment gapes (baille in French)” or in “a staging of an apparition’s disappearance in an evanescence, in something present and yet elusive. ‘

It is without doubt that a desire for God, who we see through a veil, is a longheld desire, unceasingly revived through the ages that has maintained the dynamism of commentators in their quest for infinity, “beyond the verse “.

The sea in our Parashah opens and closes, the miracle is temporary and the sea closes up at the end. In this way, the Hebrews accept the intermittence of the presence of God. Present to open the sea, but not remaining open after their passage. The Hebrews go on “dry feet”[2]  through it, in the same way as so many commentators like to remind us: through the Torah that as we read week after week and which closes behind us once read just like the sea in this Parashah.

It is a game between presence and absence, or rather between the “there” and the “guessed behind a veil” which is desire, infinite desire that is never satisfied. Emmanuel Levinas, in Totalité et Infini writes “Metaphysical desire desires beyond anything which can simply complete it. He is like goodness, the desire does not fill him but digs him. “…

Perhaps just as the scribe digs the interval between the words of the “sea crossing”, the Song of the Sea in the scrolls of the Torah, sharpen this never satisfied thirst, , to discover what lies behind the veil of words in the same way as behind the veil of the Holy of Holies in the Temple.

Emmanuel Levinas said about the “caress” in Totalié et Infini that it “consists of not seizing anything but soliciting what it is escaping, what it is hidden. This is not an intentionality of disclosure but of research. “

So let’s have a look with passion on these texts and caress their words ; let’s be attentive to the grazing of the veil which separates us from the infinite trying to guess through our fingertips, a part of the nakedness of God

The hands warmed around my cup of clear tea, empty now, I contemplated the letter alef drawn in the background. If water were the words of the Torah, I had drunk all those in my tea today. Thinking of how to undress the text of this Parashah, there, remained only one letter of the alphabet in the bottom of my cup, a silent letter, the first letter of God’s Name.