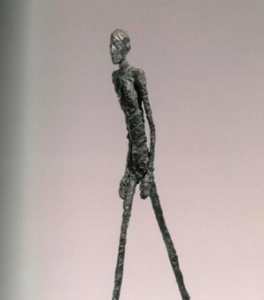 For a long, long time, a story of the Baal Shem Tov has been told. He is supposed to have been a great sage who lived in the Carpathians, in Podolia in the 18th century. He is credited by stories with all sorts of miracles but above all with great wisdom.

It is therefore said that when the great Baal Shem Tov learned that a great misfortune was about to occur, he went into the forest, in a very specific place that he knew, he lit a big fire, in a very specific way, he sang songs, he danced, he said a prayer in a very precise way and the danger was averted.

In the next generation, when a disciple of the great Baal Shem Tov sensed that a misfortune could occur, he went to this forest in this very precise place that he knew, he lit a big fire, in a very precise way, he sang songs, he danced… He no longer remembered the prayers but misfortune was still avoided…

He no longer remembered the songs, nor the dances, nor the prayers but the misfortunes didn’t come.

After him, his disciple knew well that it was too late. That he wouldn’t understand the story if it was told to him. But in spite of everything he addressed himself to God and said to him:

Martin Buber said that in contact with the Baal Shem Tov and his stories, those who listened to them became “more whole”. In them,, awoke their secret melody, their own melody, buried, which they believed lost, and while they found this melody without words, this niggun which they believed lost, they realized that in reality, it was always there and claimed them and spoke to everyone at heart, in secret his sweet native language as Baudelaire says in his poem L’Invitation au Voyage.

The stories would therefore bring us back to ourselves, to what makes us unique, to our face, as Emmanuel Levinas would no doubt tell us.

But then why are these words and more precisely these 10 commandments given in a desert?

A food for thought can be given to us in the very word “desert” which can be read in Hebrew in several ways because this root DVR can also mean the word word. The words word and the desert are thus twisted one in the other by the root.

The word of God is revealed in a desert. In a place without an owner (hefker in Hebrew), a place of extreme destitution, a place of emptiness like a blank page so that for a moment, only this word exists.

During the exhibition dedicated to Giacometti in 2018 at the Maillol Museum in Paris, I spent several hours scrutinizing the details of the famous The Walking Man. This minimalist sculpture represents a man walking in extreme thinness and fragility, the bust forward in a voluntary walk, perhaps facing the wind. It was by observing more attentively that I noticed the difficulty in grasping on which foot the Walking Man took his point of support.

What foot is he leaning on?

In reality, none. The walker appears to be floating above the ground.

Referring to the text, the parashah B’ha’alotacha tells us:

It is literally on the words of God that the children of Israel took their point of support, as if on a cloud, in the suggestive and fleece softness of the metaphor.

But saying words in the desert, in an empty space without decoration to let the words carry all their evocative and image-creating power, this is how storytellers work who tell without visual support.

This is also the essence of the theatrical work of the English director Peter Brook, most of whose stagings have been done with little or no scenery, thus leaving the actors to say texts in “empty spaces” to leave the gaze of the viewer.

Thus the famous scene of the gravediggers in Hamlet took place on a bare stage with Persian rugs on the ground as a cemetery and simple wooden handles as a shovel. However, the lack of decor and accessories, far from limiting the credibility of the action, by summoning the imagination and therefore in a certain way what is most intimate to us, gave the play something new and deep and, like the tales of the Baal Shem Tov, spoke to each one to the soul, in secret his sweet native language as Baudelaire would say so well in his poem l’Invitation au Voyage.

Empty space, like the choice of the desert in the Bible, allows words to carry all their possible meanings as well as everyone to create the images that their imagination allows.

Words are birds with folded wings just waiting for the breath of the reader to fly away, said Emmanuel Levinas. Let us add that for this, the words need the space and the silence of the desert in order to resonate in us.

It is in this idea that the Midrash tells us He who does not make it a desert cannot acquire the wisdom of the Torah. [2]

Still in the shadow of Shavuot, let us make ourselves a “desert”, a milky white page on which we rewrite our intimate understanding of the texts and of God, let us ride with delight the fleece softness of the biblical text’s metaphors because even if we no longer remember the exact location of the Shabbat glade, or how to make the fire, or the songs or the dances, the most important thing is to be able to tell the story.