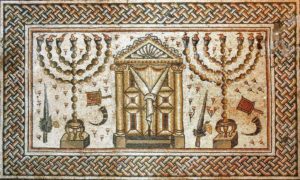 This command follows immediately after a description of 12 days of sumptuous sacrifices offered by the twelve tribes of Israel. Rashi believed that that this juxtaposition of the  laws dealing with the candelabrum with the section dealing with the offerings of the princes during the dedication of the altar was deliberate; that it was supposed to reassure Aaron that, even though the Levites did not present an offering during this ceremony, they were still destined to play an important role in Israelite society.  This role is later described as follows:

But why does the section that describes the special status of the tribe of Levi start with a command to tend to the light of the menorah? What is the menorah given such an importance? Our portion does not address this problem. However, the  significance of the menorah is ix explained in the postexilic prophecy of Zechariah:

These seven [lights of the candelabrum] are the eyes of the Eternal, that run to and from through the whole earth. (Zechariah 4:10)

Zechariah refers here to seven celestial bodies known in antiquity: the Moon, Mercury, Venus, the Sun, Mars, Jupiter, and Saturn. As such, the lights of the menorah symbolise the cosmic order of the universe. They are also described as ‘the eyes of the Eternal’, manifestations of Divine providence in the universe.

One can ask here: hasn’t the presence and providence of the Eternal been made explicitly known within and without the Tabernacle? After all, in this very Torah portion we read:

I believe that Aaron and his descendants were commanded to tend to the lights of the menorah for four reasons. First, these reminders of the Divine presence were less frightening and more comprehensible than the cosmic displays of God’s power. Second, the appreciation of the Divine presence symbolised by the lights of the menorah gave the Israelites a Torah-based, God-centric way to admire the miracle of light. This aimed to turn the Israelite attention away from the stars, which could have easily become objects of worship. Third, the menorah, a ritual object unique to Israelite worship, became a material symbol of distinct Israelite (and later Jewish) identity. Finally, the fact that the light of the menorah is lit and kept aflame by humans, not God, was supposed to teach the Jewish people that their effort and action are required to manifest the Divine presence in the world.

The understanding of the actions that one needed to undertake to find favour in ‘the eyes’ of the Eternal  evolved with the history of Judaism. Over and over, the Torah emphasises the importance of making sure that the Jewish community should take action to protect the most vulnerable: widows, orphans and strangers. Rabbinic Judaism embraced this concern; correspondingly, it developed an elaborate system of laws to ensure that Jewish communal life reflects this call for a more equitable society. Sadly, due to the often precarious and legally disadvantaged position of Jews in the pre-modern world, Judaism’s ambition to build a better world was mostly focused on the inner dynamic of Jewish life. Only in the period of Enlightenment and emancipation, Jews were allowed to take an active role in manifesting God’s presence through their contributions to general society. Reform Judaism – a religious response to these new circumstances – embraced them by encouraging Progressive Jews to support causes that promote justice and equality. As a result, both Progressive individuals and institutions  have been active in many movements that have fought for social justice and human rights. One of the most prominent examples of such involvement is the role of the Religious Action Center (RAC) of Reform Judaism in the American Civil Rights Movement. The RAC was an important ally of the African-American struggle for equal rights. In fact, two key legal achievements of the Civil Rights Movement, the Civil Rights Act of 1964 and the Voting Rights Act of 1965, were both drafted in the RAC conference room. Today, more than fifty years after these momentous pieces of legislation, African Americans are protesting against the discrimination they still experience daily. I believe that it is now our duty as Progressive Jews to follow the tradition of our Movement; to support African Americans in their non-violent struggles against injustice. At the same time, I believe that it is our duty to promote peace and decry violence as a way of solving conflicts or reaching political goals. I am aware that, as British Jews, we have limited capacity to influence the course of events in America. However, it does not mean that we are powerless. There are still a number of ways in which we can be helpful. First, we can raise British awareness about the struggles that African Americans face. Second, we can support WUPJ, our global Progressive Movement, which aids American Jewish involvement in the issues of racial justice. Third,  we can get involved in causes that address the issues of racism in Britain.

I know that such forms of support do not bring about a transformative change overnight. Rather, they can all be viewed as small contributions to what hopefully turns out to be an enduring change. I am also aware that for many these changes are insufficient for this very reason. To them, I want to respond, in the words of prophet Zechariah:

I hope and pray that these ‘small beginnings’ of thousands of people in the US and abroad, will bring about a world where all people, irrespective of their race, faith, gender or sexual orientation, will be treated equally and with respect. On this day, in Zechariah’s words:

May this day come soon and last forever. And let us say: Amen.