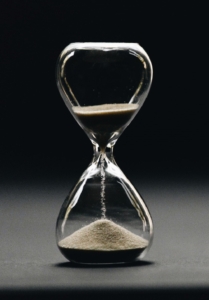 Jewish time is a little bit different to non-Jewish time, and no, this is not a joke about lateness and synagogue attendance! Jewish cycles of time have a different rhythm and balance to the Gregorian cycle of time that we use in the wider society today.

One of our cycles of time is based on the waxing and waning of the moon’s cycle that marks the months, and the other cycle follows the seasons so that we might know the best time to plant seeds and harvest the resulting crops. These two cycles work hand in hand to give us the calendar we use, and weaved throughout them both re patterns of the number seven.

The patterns of seven, perhaps surprisingly, don’t follow the sun or the moon; rather, they are patterns uniquely commanded by a tradition that has been observed in some way for two or three thousand years, regardless of their seemingly cosmic irrelevance.

Shabbat, the seventh day of the week, is the first thing the Torah declares as kadosh, holy. After working for seven days making the heavens and the earth, the Eternal One rests on the seventh day; the very beginning of creation teaches us that work and rest need to be balanced, in a cycle of seven.

Mirroring God’s actions, our tradition teaches that humans too can work for six days of the week, before taking a mandatory rest on the seventh; we are to create, like God, and then enjoy the benefits. One could liken this to stopping for a cup of tea at the end of a long hike up a mountain; one could of course just turn around and walk home, but then one would be missing out the chance to get one’s energy back and enjoy sitting still for a while, taking in the view. One whole day of rest creates a balance in our lives, and as someone reminded me recently, also connects all shabbat observers through sanctified time.

Our portion this week introduces us to two, larger, cycles of seven. The first, a shabbat for the land, the shemittah year. After six years of planting and harvesting, we are invited to allow the land to take its own shabbat – a year of release. After seven shemittah cycles, we are to celebrate a Jubilee, a time of freedom and release of slaves and debts – so Jewish tradition gives us personal rest, land rest, and societal rest.

Shabbat is a well-known practice in today’s society, shemittah and Jubilee are less widely observed, partially because the Jewish people have become less connected to agricultural cycles and working the land, so shemittah and Jubilee have become less important, though many Jews around the world are reclaiming these bigger cycles of seven. The power and benefits that are derived from the weekly cycle of workday week plus Shabbat rest have been proven over centuries, so what might all of the rules about time in Parashat B’har have to offer us, in 2022?

Behind all of the laws, inclusive of those about time, in this week’s portion, is a fundamental intent to teach respect for the land, traditionally understood as so, because the Earth belongs to God, and not to us. Tradition teaches us that we are, at best, just temporary tenants. What though, if God is, too.

Leviticus 25:23 tells us that “the land must not be sold beyond reclaim, for the land is mine; you are but strangers resident with me.” The Hebrew phrase gerim v’toshavim “strangers resident with me” occurs in several places in Torah. It refers not only to the Israelites as “resident strangers,” but also to God as a resident stranger among Israel. The pshat meaning of this phrase highlights the idea that God is a landlord from whom we rent, and the conditions of our rental are many.

For Ephraim, it might be better to translate the Hebrew imadi as “along with me” rather than just “with me” – that is to say, Ephraim understands that God too is a resident stranger and our existential loneliness in the vastness of the cosmos is mirrored in God.

“ … for whomever is a stranger has no people with whom to cleave and to draw near and to tell of his experiences. And for anyone who’s heart has no friend … when he sees a fellow stranger [and feel resonant as fellow outsiders] then he may recount with this person his experiences” (Degel Machaneh Efraim, Behar 1, trans., Rabbi Ben Spratt).

God it seems, may well exist alone and apart from routine and structure, and Torah commanding us to disrupt our own sense of routine and structure invites us to embrace a similar state of being. In this way, we open ourselves up to a better understanding of what it means to be a resident stranger along with God.

We live in an ever increasing time of increasing alienation from each other, from the natural world and from its cycles; it is easy to forget that the cycles of the sun, the moon, and the seasons are the foundations for life.

If Parashat B’har can teach us anything in 2022, let it be that we ought to strive to join God as resident strangers of the world in which we find ourselves, and may we take seriously the commandment to connect: to each other, to God, to the world.