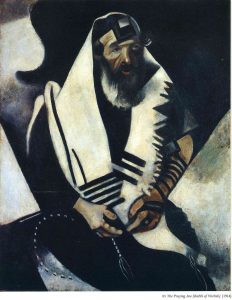 There is a distinct and important symmetry between the opening and closing pesukim of this week’s sidra, which is that Parashat Bo begins and ends with otot—signs. Such signs are the basic means by which God communicates with Man and Man communicates with God. What then, we might ask, does this Parashah have to teach us about such communication? In the first pasuk [Exodus 10.1], we read:

God told Moses to go to Pharaoh, because God has hardened (that is, hichbad’ti) Pharaoh’s heart and that of his servants in order that God may place his signs—otot—into their midst. This formulaic text is the standard form in which God speaks of the plagues, and their theologically mysterious justification. Normally, it may be worth noting, God’s signs/otot are accompanied by his wonders/moftim. This is from Exodus 7.3:

Here God has hardened (this time, eqasheh) Pharaoh’s heart in order that his signs and wonders may be multiplied in the land of Egypt. A fair complaint, one would have thought, is that if God has hardened Pharaoh’s heart, it is hardly fair to punish him—and, still less, to punish the people of Egypt—for his obstinacy. A clear implication of the passage, though, is that within the Torah God may create and ordain extreme violence solely in order to show or multiply his signs and wonders. Indeed, such a theologically difficult reading sits quite comfortably with the other otot of God: Noah’s Rainbow is called an ot, and all the world has had to drown for one family to receive that covenantal pledge; all of the plagues, with their massive weight of suffering and death, are called otot; the incense burners of Korah and his rebels, 250 of whom have been swallowed into the earth, are also otot. These are all reminders of God’s awesome ability to punish transgression.

And yet, whilst wonders/moftim are for God and God alone, mankind too is afforded otot, and we should observe that mankind’s otot, like those of God, are invariably guaranteed by some form of violence. The Sabbath is an ot (Exodus 31.13) and, its significance is guaranteed by the violence with which transgressors of the Sabbath are punished (as in the story of the wood-gatherer); the Paschal lamb which we are commanded to slaughter in this week’s sidra is also an ot, a sign that God should pass-over the Israelite houses in Egypt; circumcision too is called an ot, a sign of the Abrahamic covenant, and I am not amongst those who would pretend that circumcision is anything other than an act of profound and primal violence—the violence, indeed, is the point of that ritual. A final ot is alluded to in the concluding pesukim of the week’s sidra (Exodus 13:15-16)

Because God has brought the children of Israel out of Egypt by the slaughter of the Egyptian first-born, the redeemed slaves and their descendants are commanded to wear a particular ot upon their arms and between their eyes: that is, the mitzvah of laying tefillin. There are four distinct commands to wear tefillin in the Torah: two appear in the Shema, where the signs which we are commanded to bind onto our body appear most connected to the obligation to love God whole-heartedly, and to teach Torah to our children. In these verses, though, the mitzvah of Tefillin is shown to be grounded in remembrance of the slaughter of the Egyptian first-born: it is because we were spared from such blood-shed that we lay Tefillin in the morning; another ot, then, which is grounded and guaranteed by an account of Divine violence.

A sign is the most basic unit of communication: a word is a sign, the clothes we wear are signs, the cars we drive are signs. Signification is communication is signification, and within the Torah, God’s signs are the technic of divine communication. God’s signs include rainbows, miracles and memorials of past miracles: these are the guarantors of God’s covenantal pledges to the Jewish people. Our signs—the Jewish people’s otot—are a reciprocal pledge: the Torah suggests that God requires we embody our commitment to the Jewish covenant, and the Torah teaches the appropriate means for doing so. Those means, those signs, include tefillin, circumcision and Shabbat. What unites all of these signs is that they are either guaranteed or inaugurated by a foundational and profound violence: the death of the Egyptian first-born, the drowning of the generation of Noah, and the agony, hopefully brief, of our circumcised children.*

This parashah opens and closes with otot: the first, a sign by which God shows his presence to the world, and demonstrates his fidelity to the Israelites in the face of their oppressors; the second, the Tefillin with which we bind our bodies as if to respond to God, saying hinenu, here we stand, ready to embody our covenant. The violence underlying these signs cannot be ignored because violence always plays an inauguratory function at the origins of language, community and law. Our signs are the sign that we choose non-violence; that we recognize that without communication, violence awaits. Parashat Bo, so full of violence, opens and closes with otot because good communication is alternative to violence; and I believe that our covenant will stand or fall by the signs with which we embody that resistance.

*My usage of the terms violence and inauguratory is deeply influenced by Walter Benjamin’s ‘Critique of Violence’ (1921).