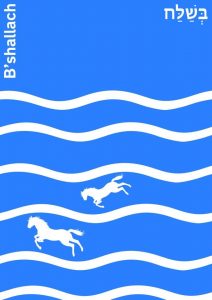 The Song of the Sea (Exodus 15:1-18) is written in extremely ancient Hebrew. This means it might be one of the Torah’s oldest passages… or one of the Torah’s most recent passages. Biblical scholars are divided, quite bitterly actually, on which it is.

Brian D Russell’s book The Song of the Sea insists that the archaic grammar and antiquated syntax of the Hebrew text indicate an early composition. That seems sensible; similarly, we know that Beowulf must be old because it’s written in Old English.

Martin L Brenner’s book, however, also called The Song of the Sea, is quite certain that the archaic grammar and antiquated syntax is “a matter of intentional style, and artificial”: the text was deliberately written with old-fashioned Hebrew to imitate or parody the poetry of a bygone age. Just as tourist trap cafés in Windsor called ‘Ye Olde Shoppe’ don’t actually date back to medieval times, no more can the outmoded language of the Song of the Sea be taken as proof of an early composition.

Therefore, we are left with a text that might be extremely old or might be much more recent. And we have no way of telling which it is.

Except, of course, in terms of the way that we – contemporary Jews – in terms of the way that we use the text, it’s both. After each week of our 21st-century lives, after six days of iPhones and OysterCards and helplines and ATMs, we go to synagogue and unroll a length of cowskin on which a holy book has been handwritten. We are present-day people knowingly doing an extremely antiquated thing; are we archaising our own lives in the way that Brenner believes the Song of the Sea was archaised?

Whether Russell is right that this particular passage is older than most of the Torah, or Brenner is right and it’s newer, either way it’s still almost incomprehensibly ancient compared to where we are now. Yet we can only approach Torah with our modern eyes. Perhaps the ba’al koreh, the reader, even practiced their reading from Sefaria or another app. However ancient the words are, we read and use them from 2020.

Mishael Cheshin once said: “When interpreting a text, we are equipped with more than just a dictionary. We carry with us Bible and heritage, love of humanity and our inner quest for freedom. A text without that platform is like a house without foundations. As we read, we carry on our backs an interpretive quiver. Inside this quiver are the values, principles, and doctrines without which we would not be who we are: morality, fairness, justice… We are not blank slates. Before approaching the text, we must ask: Who are we?”

In fact, whether or not a biblical passage feels antiquated is not really a function of its literal age at all. For English-speakers, our mental image of ‘old-fashioned language’ derives largely from the phrasing of the ubiquitous King James Bible – thee and thou and shalt and mayst – yet that post-dates the Torah by many centuries. Whereas a more modern translation of exactly the same verses can transform them into something vibrant, comprehensible and accessible.

The Song of the Sea, then, might be from the early period of biblical composition or it might be from a later period, but when we read it in synagogue we are thirsting for relevance. We remake the text each time we read it.

Yet every time we read it, however old it is and however much it’s been remade, we come to the final verse: “Adonai yimloch l’olam va’ed: the Eternal One will reign for ever and ever.”

There are hundreds of pages of debate over the dating of the Song of the Sea. Most of them are extremely technical and, no offence intended to Russell and Brenner, extremely dull. From an academic point of view it may be important to decide which assertion is correct. But from a rabbinic point of view, from a congregational point of view, for those of us who use Torah in our Jewish lives, the answer is (i) it doesn’t matter, and (ii) neither. Torah is timeless. It is with us for ever and ever, and God’s role changes while God’s rule is eternal, so it is with our holy texts.

“In Your strength,” the Song of the Sea tells us, “You will guide the people You have redeemed to Your holy dwelling.”

Our journey to our ultimate destination takes us in a different direction every year. The old-new words in the Torah help to transport us there.