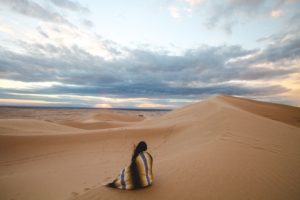 At eleven years old, I knew Beshallach had to be my bat-mitzvah parashah. Beshallach is a budding feminist’s dream: the prophetess Miriam leads the Israelites in song and dance in the Torah reading; the prophetess and judge Deborah and the war heroine Yael take centre stage in the haftarah (reading from the Prophets). I wanted the parashah for the above reasons, but also because I wanted to read about my namesake, Yael. Beshallach falls a month and a half after my birthday, so initially our synagogue was reluctant to grant my wish. However, with enough prodding, they eventually caved.

Haftarat Beshallach is a suspenseful tale of battle, prophecy, and dramatic irony worthy of a Homeric epic. The Hazorites oppress the Israelites. Deborah the Prophetess, the Israelite chieftain, summons Barak son of Avinoam to lead the Israelites into battle against Hazor. Barak says that he will only do this if Deborah comes with him. Deborah agrees, but prophesies that if she does, the glory of the battle will not be his, but will fall into the hands of a woman. Flash forward: Barak and Deborah achieve a resounding victory, but the Hazorite general, Sisera, escapes. He seeks refuge in the tent of Yael, wife of an ally of Hazor. Sisera asks for water, Yael gives him milk instead, he falls asleep, and Yael hammers a tent peg through his head. Barak runs after Sisera, Yael goes out to greet Barak, invites him in and shows him Sisera’s dead body. Thus, Deborah’s prophecy is fulfilled.

Recently, I asked my parents if they could unearth my bat-mitvah dvar torah, since I was curious what my pre-teen self had to say. Surprisingly, my dad was successful, and sent it along to me. At twelve-years-old, I struggled with Yael’s actions. How could she kill a man in cold blood? Was it ethical to kill one person for the sake of saving many? I wrote:

In the Talmud we read the question, “Whose blood is redder?” This question implies

prohibited. So on one hand, we are taught not to murder, and yet on the other hand we

celebrate a woman who has taken another’s life.

23 years later, after having lived in the body of a teenage girl, and then a woman, I no longer have the qualms that I did at twelve. In these 23 years, I have experienced what it is to live as a woman in a patriarchal society. I remember being given a “rape whistle” my first week of university, and my aunt teaching me how to hold my keys like an iron knuckle, so I could punch anybody trying to follow me at night. I have been harassed in public spaces: on the street, on public transport, and yes, in synagogue; I have been physically assaulted on the Overground and in my own home; I have lived through the age of #metoo and seen how it is still so difficult to bring perpetrators of abuse to justice, leaving them free to abuse again. So, my question is no longer “why did Yael kill Sisera?” If a man runs towards your tent, armed, bloodied and fresh from battle, what are you supposed to assume his intentions are?! It is perfectly logical to me that Yael would have killed Sisera out of fear. My question is instead, why didn’t she off Barak, as well? In many ways, the situation is exactly the same: a bloodied general runs towards a woman’s tent, with an obvious sense of purpose. So, why wasn’t Yael afraid of Barak?

Perhaps, it came down to reputation. Even today, the phenomenon of “whisper networks” persists. Sarah Jeong defines “whisper networks” as “informal chains of secondhand and sometimes firsthand information about sexual harassers or rapists in a community or industry.” In other words, when laws and policies fail to protect victims, women and other marginalised groups share information to protect one another. What might Yael have heard about Sisera? In Deborah’s song, Deborah imagines Sisera’s mother’s servant consoling Sisera’s mother when Sisera has not yet returned home: “They must be dividing the spoil they have found: A damsel or two for each man” (Judges 5:30). It sounds like raping young women is a routine practice for Sisera and his men. He embodies toxic masculinity and rape culture at its worst. No wonder Yael thought to defend herself when she saw him approaching.

On the other hand, what might Yael have heard about Barak? We know that Barak respects female power. He can’t imagine going into battle without Deborah, honouring her leadership, strategic mind, and direct relationship with God. When Deborah tells Barak that the cost of her joining him will be that a woman will receive the ultimate glory, he clearly doesn’t mind. Barak values women; he sees them as wise and powerful. He is willing to admit when a woman might have skills that he doesn’t, and he is happy to sacrifice the spotlight, if it means that the outcome will serve everyone. Barak shows himself capable of allyship. If Yael had known this, she might have been less likely to reach for the tent peg.

Haftarat Beshallach is a story that illustrates that the courage to step across gender boundaries helps everyone (and that the reverse is equally true). Deborah and Yael take on qualities stereotypically associated with men – they are leaders and war heroines. Barak takes on qualities stereotypically associated with women – the ability to step back and make space for others – without fearing that he’ll be worth any less for doing so. Sisera, however, is incapable of the kind of allyship and humility that Barak exemplifies. I believe this is why the Israelites are victorious, while Sisera ends up dead on the floor of Yael’s tent.  When we are brave enough to be something other than what society expects of us, the outcome benefits us all. I invite us to think about how we might challenge societal assumptions about who we must be, regardless of the bodies in which we find ourselves. Dissolving these assumptions altogether is key to bringing about a more just world.