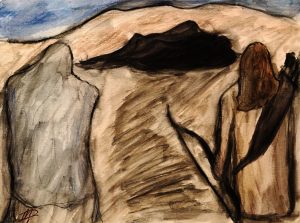 Diogenes, the father of Greek Cynic philosophy, left special end-of-life instructions with his trusted friends and followers in Corinth. Accounts of the events leading up to death are varied and disputed among scholars, but lend themselves greatly to the rather sparse portrait we have of Diogenes the Cynic today. Some say that he was bitten by a dog, that the wound became infected and festered. Others reported that the philosopher had eaten a rather fetid piece of octopus, which, given his begging-bowl diet, would not be entirely surprising. Perhaps the most amusing of the apocryphal tales told of his demise is that he merely decided to stop living, and so held his breath until that condition ceased. However he did actually meet his end, it is his preparation for his death that is of particular interest here.  When this time drew near, Diogenes made known his final wishes for the treatment of his body after death: instead of a burial, he asked that his body be cast over the city wall without ceremony. Confused, his friends and students asked if he truly wished for his body to become food for wild animals. “Not at all” replied Diogenes, “just be sure to provide me with a stick with which to keep the creatures at bay.” Perplexed, his friends and students persisted asking “how can your lifeless and unconscious body possibly fight off the beasts?” To which Diogenese replied sarcastically  “If in death I cannot be aware of anything, how could the bites of wild creatures cause me any harm?”

Diogenes The Cynic believed that nothing awaits us after death, that our bodies, after we meet our end, lay as empty husks, meaningless, and without further import. This thought would be quite foreign to our patriarch, Abraham, as he sought to legitimately purchase a final resting place to lay the remains of his deceased wife, Sarah.

Parshat Chayei Sarah creates a satisfying cycle of those pesky end-of-life obligations that we don’t often wish to discuss or even consider until the time is upon us. Starting with the death of Sarah and ending with the death of her husband, the meat of this parashah is filled with Abraham’s need to deal with his family and legacy before his own final departure, including marrying off their son, remarrying and siring a few more children, and dispersing those children among the nations. His first obligation, however, is to bury his wife, and the Torah spends an entire chapter dedicated to the purchase of land for this purpose. It is through the drawn-out narrative of this process that we learn four very important death-related obligations:

First, we learn the obligation of mourning our dead. We are told that Abraham “came to mourn for Sarah, and to weep for her,” teaching us that an essential part of dealing with the death of a loved one is taking the time to mourn, to truly and properly mourn. We are even given permission to cry and show physical signs of loss and devastation. We are not given a specific amount of time for which to engage in this practice, but we know that it occurs right after death. It hurts, and it may not seem dignified, but it is our right to weep, and to wail, and to suffer.

A second lesson is that we are supposed to sit low to the ground when we are in mourning. Although our current ritual practice is to sit low during shiv’a, the period of mourning after burial, we are told that, after some period of mourning, but before burial, Abraham “rose up from before his dead.” Was Abraham observing some form of our current practice to sit in a low chair during shiv’a? It could be that Abraham was so deeply stricken by the loss of his wife that he was actually lying down next to her, or possibly even over her. It is not difficult to imagine this scenario, a devastated mourner lying on their lost partner in the deepest of despair, unwilling to let go. Or perhaps Abraham was sitting low because, at that time in history, chairs pretty much consisted of a mat or pillow on the ground, and it would be quite difficult for Abraham to sit in any other manner.

Our third lesson is that we must seek out and purchase a burial plot for our loved ones. The haggling process that Abraham goes through here would baffle any sane merchant or stall-holder in the shuk, as Abraham refuses to take the land for free when offered it by Ephron, the proper owner of the land. Abraham demands the right to pay for this land, to make an official purchase. We are even told that Abraham practically forces the 400 shekels of silver into Ephron’s hand. And all this for some dirt and a cave. All this for a place to lay Sarah’s remains.

Our final lesson regarding death and burial happens all the way at the end of our parashah, after the death of Abraham, when his two main sons, Isaac and Ishmael “buried him in the cave of Machpelah, in the field of Ephron.” You did read that correctly; Ishmael, of whom we have not seen hide nor hair since his expulsion by his father, Abraham, joins Isaac in the burial of their father. The text just sort of throws that bit in there as if it’s no big deal, but we know better. This is a big deal. This is the largest of family rifts, the repercussions of which reverberate through time. Yet sibling rivalries, old quarrels, disputes over inheritance; none of these supersede the importance of paying final respects to a parent through burial.

Now, if we put all of these lessons together, we get something quite extraordinary: the body has value beyond its expiry date. Even when consciousness has left, and the body is no longer animate, when the eyes no longer see, and the chest no longer rises and falls, when life departs, the body remains. It, however, no longer has any real use. After death, the body begins the steady march to decay and reclamation by the earth. This irreversible process is the wedge between the physical body and the living mind. Permit me to get a bit philosophical and kabbalistic here as I illustrate to you my point. I imagine the part of us that is alive as the spark within our bodies. I see this spark as our true self, and the body as the vessel whose main purpose is to house this spark and give it a physical form with which to interact with the physical world. Death, in this case, would be the departing of that spark from its vessel. In this imagining, everything that makes us ‘us’ is contained in that spark, and the ‘us’ part leaves the body upon our death. But then, after expiration, we are left with some housekeeping duties. The person is gone but this shell remains, this bit of flesh and bone that no longer contains the spark of life. A part of us cringes at the thought of throwing that body out into the elements to be consumed by beasts or to rot away beneath the open sky. There is something about the human body, especially of a loved one, that still holds import for us, that retains its value even after death. Perhaps it is the intersection of holy and mundane. This earthly vessel once held life, and moved and breathed and interacted with the world. When life leaves this body, it is holier for having contained that spark. Think of that kiddush cup that you only use on Shabbat and holidays. Its primary function is to hold a beverage that serves to sanctify a holy and special day through blessings recited over its contents. But isn’t a cup just a cup? Why not drink a glass of wine from this cup on a lazy Sunday afternoon, or use it to serve your friend soda over a football game? We just don’t; it would be strange, and it would feel a bit wrong. This object has reached some level of holiness in our minds for its use as an object of blessing and sanctifying. It is not the cup that is holy, and yet it seems to retain holiness. If this particular cup were to break, we might feel a sense of wrongness at merely tossing it into the bin with our common rubbish.

And even more so, the remains of a vessel that once contained life.