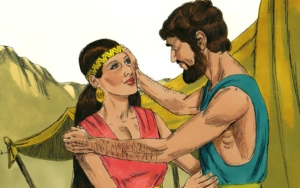 “The next stage: Sarah, Rivqah and narrative sequencing”

The challenge of ensuring Jewish continuity has always been a driving force in the drama of our people, right from our mythic Biblical beginnings. It is next week’s parashah that is entitled Toldot (generations), but it is in this week’s, Chayei Sarah, that we have the transition from the very first Jewish couple to the second with the death of Sarah, and the marriage of Yitzchaq and Rivqah, after which Avraham dies too and is buried with Sarah.

What questions are raised, what insights might be afforded by the juxtapositions and sequencing of our text? It’s a question commentators ask time and again. Here we notice that, as if to accentuate the momentous handover of the covenantal baton, the union of Yitzchaq and Rivqah is framed by the deaths of Sarah and Avraham respectively.

Particularly interesting is the question of how Sarah’s death relates to the search for and addition of Rivqah to the family – a question the text itself seems to prompt by drawing the two events together in the comment that ‘Yitzchaq brought Rivqah into the tent of his mother Sarah and took Rivqah as his wife and loved her, and found comfort after his mother[’s death]’.

Why is Yitzchaq not married before his mother has died?

Was it that Sarah was so desperately protective of the miraculous child of her old age that she wanted to keep him in that role of child until her death?

But then, are we really to read Sarah as so flagrantly flouting the guidelines for Jewish mothers as to see her resisting rather than raring to attend the wedding of her only son?

Does the onus lie with Avraham? Is it only when Sarah dies that he comes to terms with his own mortality and the need to delay no longer in securing the next generation?

Or is it to do with Yitzchaq? Does the line of Torah quoted above imply that he was perhaps too immature, too attached to his role as his mother’s son to have the independent adult spirit necessary to start a family himself?

Perhaps the magnetic force of the Akedah, which we read in last week’s parashah, is again set to draw our attention as we grapple with these questions.

The idea that the timing of Rivqah’s arrival is to do with the pace of Yitzchaq’s maturation might be linked to a fascinating idea from the Zohar that Rivqah is first mentioned after the Akedah because until then, Isaac had a ‘feminine’ soul. Only after his ordeal on the mountain does he gain a ‘masculine’ soul, thereby becoming ready for his ‘soulmate’. It’s a fascinating and provocative combination of a notion approaching gender fluidity on the one hand with a rigid heteronormativity on the other.

Perhaps we could draw from this mystical tale the idea that Yitzchaq isn’t ready for marriage in some profound way until he has plumbed the bewildering and frightening depths of what it means to be bound to God. Equally, from a storytelling perspective, we somehow intuit that for this moment of intense vulnerability to maintain its force, Isaac cannot be rooted and established in marriage – he must be alone.

That doesn’t, however, explain why Sarah must die before Isaac is married. In fact, we hear of Sarah’s death almost immediately after the Akedah. The division between the parashiyot might create an impression of distance, but there is in fact only a paragraph’s detour into the genealogy of Abraham’s brother separating this traumatic, dramatic high point on Mount Moriah from the death of Sarah.

This of course did not escape the notice of our commentators and midrashists – from Leviticus Rabba through Midrash Tanhuma and Midrash Pirkei De-Rabbi Eliezer to Rashi, we see the notion that the Akedah is causally linked to Sarah’s death. Though there are intriguing variations between these sources, the upshot is that Sarah dies, presumably of shock and grief, on hearing of what happened to her son at the hands of her husband.

This leaves Sarah as a victim, a figure of maternal pathos in the story. And on an emotional level, that aspect of these stories reflects our horror at what happened on Mount Moriah as we read it into the news of Sarah’s death.

But on a narratological level, it’s interesting to consider the idea that Sarah was a character who just didn’t leave room in the story for another matriarch.

Perhaps the narrative impetus for Sarah’s death is not just the Akedah, but the intervening paragraph – because, in the list of Abraham’s brother’s children, one nephew is singled out so we can hear who his child was – Rebekah.

There are certainly parallels between our first two matriarchs. Both appear in the context of the recurring ‘sister act’ motif – both couples go to visit King Abimelech of Gerar, and Abraham / Isaac tells him that Sarah / Rebekah is his sister, allowing her to be taken into Abimelech’s household until he finds out that the relationship between his guests is in fact a conjugal one. But we should not let these unsettling episodes, in which we might feel both women to be at the mercy of the whims of the men around them, overcome our awareness of Sarah and Rebekah as figures of great agency. Both Sarah and Rebekah are responsible for the fates of nations. It is at Sarah’s behest that Abraham has Ishmael with Hagar – Ishmael, who is also to be the progenitor of a great nation (Gen 17.20) – and it is through Rebekah’s machinations that God’s prediction about her twin sons that ‘the older shall serve the younger’ comes to pass, leaving Jacob as the bearer of the covenantal legacy and Esau as the father of the Edomites. They are women to be obeyed – God tells Abraham to do so – literally ‘“Listen to her voice,”’ (Sh’ma b’qolah, Gen 21.12), and Rebekah herself tells Jacob, ‘“Do as I say [lit. Listen to my voice]”’ (Sh’ma b’qoli, Gen 27.13).

In our Biblical narrative, the first mention of Rebekah is followed by Sarah’s death, on the heels of which comes the story of Rebekah’s betrothal and marriage to Isaac, only after which, having assured the next phase of the intergenerational drama, can Abraham die too. Each of our matriarchs and patriarchs are complex and challenging figures. But it seems somehow respectful to our first matriarch to note that she is a persona of such power that we feel she must leave the stage of the Biblical drama before Rivqah can, both figuratively and literally, enter her tent and take her place.