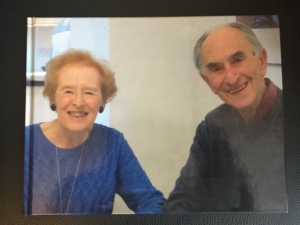 In the uncertainties of life, one thing we can be almost certain of is that, unless tragedy strikes and takes us young, one day we will lose our parents. They will die and we will bury them. It is part of what it is to be human, that one generation passes and a new one arrives.  Some people lose their parents tragically early as children or young adults. But for the rest of us, losing one’s parents is part of the midlife passage. We enter it as someone’s child; we come out the other end as orphans.

In his book, “The Orphaned Adult”, the psychologist Alexander Levy comments that although parental death is the single most common cause of bereavement in the West, there has been comparatively little written about it. In medical literature, “death of a family member” rarely refers to a parent and when it does, it typically focuses on the ramifications of the loss of parents during childhood.

This may be because losing one’s parents is a natural part of life. But it can still be acutely traumatic to lose someone who has always been there, who is in some way a part of us. It is a major life transition, as much as becoming a parent, which is also a normal part of life, and yet has many more books written about it.  Navigating a world without parents can be profoundly disorientating. Everything looks the same yet everything is different and the emotional shift can be profound.

At the beginning of Chayei Sarah, Isaac loses his mother. At the end of the parashah, he loses his father.   And at some point between the two, some healing takes place.

After the Akedah, Isaac is notably absent from the narrative, perhaps caught up in long-lasting post-traumatic stress after having seen that his father was willing to kill him. It is Abraham who buries his wife Sarah – it says nothing about Isaac joining him.  The midrash says that Sarah died after hearing that Abraham had been prepared to murder their son – so from Isaac’s perspective, not only has he lost his mother but his father’s actions, and perhaps his own lack of resistance, were responsible for her death.  We can only imagine how he feels about Abraham at this point – anger perhaps, certainly a need to separate himself from the old man.   Are Abraham’s elaborate funeral plans a way of trying to emotionally exonerate himself from a feeling of guilt?

In a Midrash in Vayikra Rabbah, Isaac returns to his mother after he narrowly escapes death and it is Isaac who tells her what happened. She asks, to clarify: “Were it not for the angel, you would already be slaughtered?” When he says “Yes” she screams six times and while screaming she dies.  What happens? Is it a heart attack? Suicide?  There is a consequence to every action. Isaac survived the Akedah but Sarah did not. In Bereishit Rabbah, it is said that Isaac’s ashes can be seen piled on the altar.  His physicality survives, but emotionally he is absent.

The death of one’s parents, where the relationship has been a good one, removes a psychological layer of protection in the world. We often become acutely aware of our own mortality, particularly if we lose them at a time when we ourselves are beginning to age.  Isaac is in his late 30’s when his mother dies, still young, but on the cusp of entering midlife.  The violence of his father and the absence of his mother plunges him into an existential crisis. According to one Midrash Isaac mourned for his mother for three years. Every time he entered her tent and saw it in darkness, he would tear his hair.

The parashah is named Chayei Sarah, the lives of Sarah.  It is as if we have two lives – the life we live, and the legacy we leave behind, and this parashah is all about Sarah’s legacy, at the core of which is her son, whom she spent so much energy trying to protect, but who in the end she couldn’t.  This is of course another truism – we can only protect our children up to a point – at some point we need to let them out in the world and just hope that they don’t come to any harm.   To know that the biggest threat your adult child faces is from their own father was enough to kill her.

It is said that grief never becomes smaller; it is just that the life we live around it grows bigger.  After a period of time our awareness expands, we realise that there are other things in our life, and slowly our grief takes its place within us – always present, but co-existing with other emotions and not always uppermost.
Healing for Isaac comes in the form of Rebekah, young, pro-active, impulsive and determined.  Abraham’s servant, who is sent to find her, sees that she’s kind, attractive and from the right family. It is not clear whether he sees her most important qualities – that she is a prophet, with a clear sense of vision, a shrewd sense of what is really going on,  and a clarity about her purpose here on earth.  It is said that when she marries Isaac and he brings her into his mother’s tent, that the light returns and God’s presence returns to that place. “And Isaac was comforted for (the loss of) his mother” (Gen 24:67).

There is another striking piece of healing that goes on.   Isaac loses his mother prematurely, but as a child, he also lost his older brother, sent into the desert with just a flask of water. Like Isaac, Ishmael also nears death, but is saved at the last minute. Unlike Isaac though, Ishmael didn’t lose his mother and so, it is said, Ishmael was able to return.  Abraham goes on to remarry and there is a tradition that says his second wife Keturah was in fact Hagar, Ishmael’s mother.  Isaac and Ishmael, who played together as children, are reunited and when their father dies, they bury him in the Cave of Machpelah, which he purchased as a burial place for Sarah, in the traumatic months after her death.  And finally Isaac achieves a measure of peace and blessing.

He is still a little broken. All those of us who have lost a parent are a little broken, which means everyone over a certain age, which means that brokenness is a part of what it is to be human. But perhaps because of that, embedded in the vulnerability and sorrow, there is also a kernel of hope and healing.