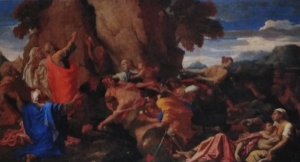 The Blossoming of Matteh : Episode Two

You may remember that last week, I told you my autobiography until my blossoming. Just in case, I remind you that my name is Matteh – or, if you prefer, you can call me Rod – and that I had been used, without being able to stop it, to do terrible wonders. Finally, something unexpected and wonderful happened to me: I blossomed…

At the end of my adventures, I wished the Israelites to learn from their mistakes, “cease their grumbling, and carry on with their journey to the Promise land.”

If only it had been so! Having blossomed was such an accomplishment for me that I could only imagine a bright future, in which the Israelites would understand their true destiny, and walk joyfully towards it. But I was too enthusiastic. The Israelites kept on grumbling.

And here is what happened.

My master’s sister died, which caused a great sadness to everyone. Soon afterwards, there was no more water for the Israelites, who were thirsty, which again caused their grumbling to rise. My miraculous blossoming, after all my time as a dry and barren rod, had not been enough to convince them that, whatever the obstacles on their way, they would overcome them and flourish as I did.

Suddenly, my master’s brother took me from the place where I was kept. I heard – or rather, I sensed, as I cannot pretend that my flowers and almonds are ears – that my master and his brother needed me to assemble the Israelites and to show me to a rock. They also had to speak to the rock, so that it would offer water to the people.

I perfectly understood my role. The view of my flowers and almonds would be the proof that water and life could arise even from apparently dry and sterile creatures. In the same way as I had miraculously flourished, the Israelites would miraculously be given water.

But they kept on crying, not even looking at me, blind to the living message I was for them.

However, the Israelites were not the only ones that I had to convince to keep faith in life. I had also to help the rock becoming conscious of the water it kept hidden in its heart, not even knowing it was there, so that it would joyfully discover it and share it. My master and his brother would support me by speaking gently to the rock, explaining to it how I blossomed, and how it could blossom too.

It was not an easy task. You know how rocks are: they do not speak, they do not listen nor react; they keep all their richness and power hidden in themselves, ignoring they possess them, and make their surface as hard as they can to protect themselves from the surrounding world. However, if that rock had been made aware of my example, it could have overcome its fear. It would have discovered how it could contribute to the world, and it would have joyfully shared its water with the Israelites.

Unfortunately, my master and his brother were both in great sadness, and the grumbling of the Israelites did not help them think clearly. My master’s brother was even more nervous than usual and, instead of speaking to the rock, he hit it twice with his own rod!

I heard the cry of pain and horror of my counterpart when he was used in such a violent way. I felt that this blow had been as painful to him as to the rock. However, the human beings who saw the scene did not seem aware of the pain of both the rock and of my colleague.

Of course, the violence of Moses did not help the rock opening itself to the world. It released its water without understanding what was happening to it, unless that it was forced to give away its most precious thing. The rock became aware of the beauty it contained at the very moment this beauty was forcefully taken away from it. I sensed its painful and angry cry, and I sensed that it had become even more distrustful and bitter than before.

I know from words whispered around me, that most human beings do not understand why my master and his brother were forbidden to enter the Promise Land after this event. It seemed to be a harsh punishment for a little transgression. But human beings did not notice the rock’s suffering when its water was taken away from it by force. They did not realise the violence that my master’s brother did to the rock when he hit it, depriving it of its most precious treasure, and from its only opportunity to grasp the beauty in itself and to reveal it to the world in a fulfilling way.

My master, a man of peace who always sought peace, could have prevented this happening, but he was so sad after his sister’s death that he was not truly present. He did not say anything. He did not stop his brother from hitting the rock.

Then, I was brought back to the place where I had to be kept. I felt sad for what happened. I felt even sadder because I did not see my master anymore after this terrible day, and I fear that he died. I also felt sad for the insensitivity of human beings, who sometimes display violence without even realising it, or who witness violence without understanding the pain of the being who suffers from it. However, I keep the hope that someday, it will change, and that every creature will be given a true chance to blossom.