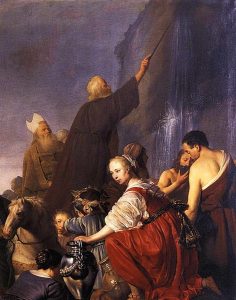 In our portion for this week, Chukkat, the people join against Moses and Aaron about the lack food and water. God tells Moses to get water for the people from a rock. “You and your brother Aaron take the rod and assemble the community, and before their eyes order the rock to yield its water. Thus shall you produce water for them from the rock and provide drink for the congregation and their beasts.” Moses, apparently angry at yet another rebellion against his leadership, failed to hear this instruction accurately. He assembled the people in front of the rock and said to them, “Listen, you rebels, shall we get water for you out of this rock?” And then he struck the rock twice with his rod, and copious water came out of the rock. But God said to Moses and Aaron that because they did not trust God enough to affirm God’s sanctity in front of the people, neither Moses nor Aaron would lead the people into the land that God has given them.

Later in the portion, the people again complained against God and Moses about the lack of food and water. In this case, God sent “seraph serpents against the people. They bit the people and many of the Israelites died.” The people asked Moses to intercede for them with God, asking that God take away the serpents. Instead, God instructed Moses to make a seraph figure (the Hebrew word suggests a fiery image,) and mount it on a standard; anyone who was bitten could simply look at the figure and they would recover. Later, the seraph figure became the object of idolatrous worship, and when King Hezekiah abolished idol worship and smashed the shrines, pillars and posts that people had been worshiping, he also destroyed the seraph. In the first incident, God punishes Moses and Aaron for losing sight of the fact that it is God who produces the water, not they. The people are not punished. But in the second incident, the people lose faith in God as well as the leadership of Moses, and it for this that they are punished with the snakes. By the time of King Hezekiah, the faith that had occasioned the curative powers of the seraph had gone, it had become the focus of idolatry, and it needed to be destroyed.

The Mishnah asks why the seraph was able to cure the Israelites who looked at it. It asks, is it the snake that revives? (mRosh Hashanah 3:8) No, the Mishnah answers, it was when Israel looked upwards and subjugated their hearts to God that they would be healed; if not, they would be harmed. It is not the symbol of God’s power that provides benefits, it is the reality of it; the symbol merely focuses a person’s attention on God’s power. The Mishnah is concerned with whether a person can fulfill a commandment simply by doing it, or if something else is required. For example, it says that if a person is passing by a synagogue and can hear the shofar sounded on Rosh Hashanah, one can fulfil the obligation to hear it only if one consciously intends to do so. Two people walking past a synagogue can both hear the identical shofar blast, but if one intends to fulfil the commandment to hear it, he has done so; the other one, who has no such intention, has not fulfilled the commandment.

The incidents from the portion we read this week remind us that our intentions matter, that it is not just what we do but how we think about it that matters. Woody Allen said that showing up is 80% of life. But the Mishnah reminds us that one can’t just show up, one must know why one is showing up.

For those of us who engage regularly in some kind of prayer, there is a constant challenge of making it meaningful. The Mishnah again has something to say about how one should approach prayer. In mBerachot 5:1, we are told that “while one is reciting Shemoneh Esrei, the central prayers of the service, even if the king greets him, he should not respond to him, and even if a snake wraps around his heel, he should not interrupt.” But that kind of concentration is possible only for a few. For the rest of us, it might be more realistic to show up, and to be open to the content of the prayers that one reads in hopes of finding meaning beyond the fact that one has shown up.

Concentration of any kind has become more and more difficult for me, and I think for many others as well, the more our lives become entwined with the ever present digital world. The feeling of intense and pleasurable concentration I used to be able to rely on when I read a book has been vitiated by my consciousness that while I’m reading, a text or email may be appearing on my phone. Do I continue to pay full attention to what I’m reading, or do I check to make sure nothing crucial is happening to which I need to pay attention. And sometimes, of course, something is. At moments like that, I tell myself that dividing my attention between my phone and the book I’m engaged with will help me read with more concentration later, because once I’ve checked my phone, I can be sure that nothing urgent is requiring my attention. But there is always something about to happen, and the concentration I used to bring to reading, or anything else, is never fully at the intensity that I recall from years ago.

Moses failed to listen to the message that God had delivered to him and reacted angrily and hastily in his attempt to fulfill God’s commandments to him. But those Israelites who, having been bitten by a snake, were able to summon the concentration to look at the seraph and become aware of God’s power. And that saved them.

I have just finished the last essay of the term, and now I can finally read the books that have been collecting on my bookshelf for the last year. I hope that I don’t need to be bitten by a snake to summon the concentration with which I hope to approach my reading.