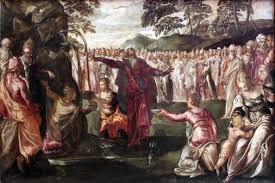 There is a poignancy about this time of year, full of endings and beginnings.  In the northern hemisphere, this is the end of the academic year and the beginning of the agricultural harvest. We are just past midsummer – the days are full of light, but they are no longer getting longer. Sometimes something has to end before something new can start.

In this week’s Torah we read about the death of the old leadership, the revolutionary leadership, the team of two brothers and a sister, that brought the Israelites out of Egypt.  Miriam dies and later so too does her brother Aaron.  Moses doesn’t die yet, but he is told he will not live to bring the Israelites into the Promised Land.   It’s stated as a punishment for striking the rock, which always seems excessively harsh – after everything Moses has done, is he to lose out at the last moment because he lost his temper?  But the truth is, this is an older group of leaders, who were able to make the radical break from slavery but are no longer up to the challenge of leading the next generation in changed times.

When Moses strikes the rock, the word used is yach, from the root, nachah, meaning to hit, strike, or beat. In its Aramaic form it means to inflict injury on an enemy. It is mostly used to mean striking a person with intent to kill them. Moses calls the Israelites rebels morim, and strikes the rock twice – all of which suggest a degree of violence behind the anger. Moses, after all, killed an Egyptian in a fit of righteous anger as a young man, and had the strength of will to stand up to Pharaoh and receive the Torah – but settling the land will require a different skillset and different kinds of communication skills.

The 12th century French commentator Rashi,  questions why the text says kol ha’eidah, the whole community, as well as b’nei Yisrael, the Israelites. Why both when only one of those phrases would do? It’s a common rabbinic question.

Rashi’s answer is that this shows the community was now complete. Those destined to die in the desert had already died and the community standing there now were assigned for life and for the future.  It is a generational shift – the young community are now ready to enter the Promised Land – all except for their three ageing leaders.

This is not the first time that the Israelites have demanded water and that Moses has been told to get it from a rock.  Back in Exodus, shortly after they had left Egypt, the same thing happened.  Moses struck the rock and then that was the right thing to do. But times change and sometimes similar events in changed times require a different response – as politicians sometimes find out to their cost.  Moses and Aaron fail to understand that a new response is required – they can’t just keep on hitting the rock – and so it is time for them to move on. Their ban on entering the Land is not necessarily a punishment, but as something that is inevitable and necessary. In the end, both of them die before the Israelites enter the Land anyway.

The death of Miriam and the loss felt both by the community and by her two brothers, haunts this text.   Her death is dealt with very briefly.

“The community came to Kadesh – and Miriam died there and was buried there.”

That’s it. No mourning ritual, no grieving. The next sentence is about the lack of water and the Israelites complaining that they are thirsty. How much of  Moses’ anger, both at the rock, and at the people, is really part of his repressed grief at losing his sister?  He refers to the Israelites as morim, rebels. Nowhere else in Torah does the word marah, to rebel, appear in this form. The Hebrew letters for the word morim and the name Miriam, are the same, just in a different order.  Perhaps he only sees them as rebels because his bereavement, which has no form of expression, is turning into anger. Tension is building up and everyone gets angry with each other. It’s a powerful symbol of unarticulated loss.

The Rabbis noticed that Miriam’s death is directly followed by a lack of water.  The result was a Talmudic story that associates Miriam with a well that followed the Israelites about in the desert and disappeared when she died.  There is a lack of water because she has just died. The confrontation at the Waters of Merivah is a direct result of Miriam’s death.

Miriam whose very name means bitter water is closely associated with water all her life. She guards over her baby brother when he is put in a basket in the Nile; she celebrates with the women on the shores of the Sea of Reeds.  Shortly before she dies, we hear about the ritual of the red heifer, a kind of purification ritual that requires living water.  When faced with the task of producing water for a thirsty community, Moses remembers his sister, whose name has echoes of both water and rebellion. Maybe he learns that public silence for Miriam’s loss was a mistake. When Aaron dies he gets a 30-day mourning period, from where we get the practice of Shloshim.   Perhaps he learned from the mistake he made with Miriam’s death. Perhaps when the people mourn Aaron, they are mourning for Miriam as well.

The idea of Miriam’s well has been taken as a powerful motif by Jewish feminists, a symbol of the neglect of women’s wisdom in our tradition, which is partly the neglect of the personal and the interpersonal.  Many seders now include Miriam’s Cup filled with water and there is a sense that in so doing we are reclaiming intuitive wisdom, emotional intelligence. Perhaps we are acknowledging that when someone dies you need to take time to mourn them properly.  What we have at the waters of Merivah is an emotional drought.  Only when the people are allowed to grieve properly can they move on.

Every ending is also a beginning. The death of Miriam and Aaron doesn’t stop the Israelites – Joshua continues to take them to where they need to go. We just need to make space to pause and remember before we move on.