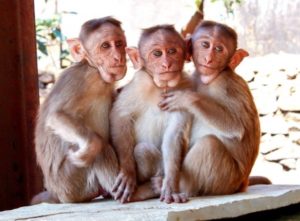 A group of monkeys caused a setback to covid testing in Delhi, when they ambushed a lab technician and snatched the coronavirus samples he was carrying. The rhesus macaques then retreated up a tree to chew quietly on their spoils. Something similar happened in the film 28 Days Later.

On the other hand, it is also monkeys (somehow inevitably, the same species of monkey – the rhesus macaque) on which vaccine trials are being carried out around the world. So monkeys are both helping and hindering our efforts to tackle the coronavirus.

Should any of these monkeys be unfortunate enough to die, whether from experimentation or through eating an infected sample, nearby humans would face a complicated halachic situation.

Parashat Chukkat outlines the laws of tumat met, of corpse impurity. This is by far the most powerful impurity described in the Hebrew Bible. Codes of Jewish law call it the grandfather of all impurity. Most substances that defile can do so only by contact of some sort: touching, moving, carrying… But, this week’s parashah tells us, a corpse can defile even through ohel, the status of being in the same tent.

Crucially, the rule only applies to human corpses – yet there is one line in the Mishnah that calls this into question. It comes from the 2nd-century sage Rabbi Yosi. The corpse of an adnei ha-sadeh, he said, defiles a tent exactly as would the corpse of a human being (m.Kilayim 8:5).

What is an adnei ha-sadeh? Nobody really knows: the Jerusalem Talmud records some weird, vaguely psychedelic idea that it’s a vegetable person connected to the ground by an umbilical cord. Rabbi Israel Lipschitz, writing in the 19th century, identifies it as an אוראנגאוטאנג. Now, this is one of those words I struggled with for ages – fruitlessly looking in every Hebrew and Aramaic dictionary I could find – until realising it just says “orangutang” in Hebrew letters! Rabbi Lipschitz argues, quite persuasively, that the creature Rabbi Yosi treated as a human being, at least for the purposes of the laws of corpse impurity, was an orangutang.

If he’s right, then this was in fact the second occasion on which Rabbi Yosi expressed a strong opinion about monkeys. Elsewhere in the Mishnah, the sages ruled that a monkey may pour water over someone’s hands and this will count as ritual handwashing – something that usually requires koach gavra, human life-force. But Rabbi Yosi disagreed (m.Yadayim 1:5). A monkey does not have koach gavra, he argued.

How can these two positions be consistent? If a chimp is sufficiently human to count as a ‘person’ for the verse from our parashah “This is the rule when a person dies in a tent” (Numbers 19:14) to apply, why is it not human enough to possess the human life-force to let it pour water over someone’s hands?

I think it’s because the rich merchant who manages to obtain a trained monkey capable of ritual handwashing on demand will inevitably use his new toy as a way of showing off. Roll up, roll up, and see the Great Domesticated Ape! The Hairy Handwasher!

The proud owner would turn the sacred ceremony of netilat yadayim, the cleansing of the hands, into a part trick. Very literally monkey business – and perhaps somewhat demeaning to the monkey.

The orangutang who dies in a tent defiling anyone with whom they share it is a different kettle of fish, though. To be in a confined space with any living creature taking its last breath has a genuine effect. When that living creature is humanoid in form and capable of being taught human activities – Rabbi Lipschitz remarks on how an ape can learn to use a knife and fork – the emotional effect will be stronger still.

Rabbi Yosi’s approach takes our Torah portion’s ohel rule and makes it into a metaphor: being in the same tent. It’s not just about physical space but about metaphysical kinship. Monkeys are capable of learning our rituals, using our cutlery and testing our vaccinations. In koach gavra and in tumat met, in life and in death, we are very much in the same tent.