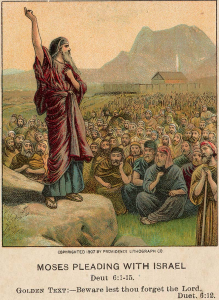 Deutoronomy: the Jewish People in a Nutshell.

‘It’s the great central book of the Jews and if you master it you’ll understand us.’

‘But is it worth reading five times?’

‘Yes because most Gentiles think of the ancient Hebrews as curious relics who reached Israel ten thousand years ago in some kind of archaic mystery.’

‘How do you think it happened?’ Cullinane asked.

‘Deuteronomy is so real to me that I feel as if my immediate ancestors – say, my great-grand father with desert dust still on his clothes – came down that valley with goats and donkeys and stumbled onto this spot.’

‘Will reading Deuteronomy give me such a feeling?’

The Source is my favourite book. For those of you who haven’t read it, it is a historical novel written by James A. Mitchener about archaeologist digging a Tel in the North of Israel. Each time the archaeologists find an artefact the story jumps back in time to tell the tale of how that object found its way into the Tel. Although Mitchener was not Jewish and it must not be forgotten that the story is fiction, his extensive research and captivating writing captures the imagination and takes you on a journey through the history of the area and in some ways the history of the Jewish people. If this were not amazing enough, written in 1964, even when the story is in ‘present day’ the narrative offers insight into the world of Israel before the six day war.

‘John, I wish you’d do your next two readings from this new English translation done by a group of Jewish scholars in Philadelphia.’

Eliav hesitated, then said, ‘It’s a ticklish point. But Deuteronomy is particularly Jewish in nature…’(Mitchener, 1966)

The book of Deuteronomy is an epic finale to the Torah. In contains a powerful closing speech from Moses in the form of a poem before he dies and is buried, a recounting of the key parts of the journey that the Israelites have embarked upon and a reiterating of the laws and commandments and what will happen to those who do not follow them. It begins this week as the Israelites have reached the edge of the promised  land.

In the above conversation between a Jewish archaeologist and his non-Jewish colleague the idea that one can understand who the Jewish people are by getting to know the text of Deuteronomy is one that has stuck with me since I read the book. I always wonder if this is just a clever bit of storytelling or if indeed there is something about the book of Deuteronomy that gives a greater insight than any other book of the Torah as to who ‘the Jewish people’ are.

This week’s Parashah sets the scene. ‘These are the words that Moses addressed to all Israel on the other side of the Jordan’ and thus Moses launches into his recounting of all the laws and the whole journey of the Israelites including all their transgressions along the way.

Moses’s retelling does not just  include stories but also features many of the primary texts and key principles in Jewish tradition. Deuteronomy is where the Shema is found, along with instructions about the regalim – the three pilgrimage festivals, Sukkot, Pesach and Shavuot. In Deuteronomy there are laws of gemilut chasadim (loving kindness), the Israelites are commanded to set aside a tenth of their harvest every third year and give it to those in need and are reminded on more than one occasion to befriend the stranger:

If this were not enough, the Moses recounts the laws of Kashrut and warns against intermarriage, and it is in Deuteronomy that we find the famous line ‘…man does not live by bread alone’.

Deuteronomy is also where we first encounter the idea of Israel as a chosen people and it comes up a number of times: ‘…the Lord your God chose you from all other peoples on the earth to be His treasured people.’

Now, all of these highlights might indicate why James A. Mitchener pinpoints Deuteronomy as the book that can teach non-Jews about the Jewish people.

Whether or not this is truly the case, the book of Deuteronomy depicts an epic scene. The Israelites have been wandering in the desert for forty years, carrying the stories of the generations before them and longing for the land they have now reached. Moses has led these people through all their trials and tribulations, suffering their complaints along the way. He has in some way created these people and been burdened with a huge responsibility. Now his time has come to move on, to pass the mantle of responsibility to someone else. Now he can rest.

A bat mitzvah student wisely said to me recently that perhaps it was not a punishment for Moses being banned from entering the land but rather a reward. He no longer had to carry the burden of the Israelites.

‘…he began again at the beginning of Deuteronomy. This time he gained a sense of the enormous historicity of the book: the unknown author, who had used the literary device of speaking as Moses, had been a scholar immersed in Jewish history and spoke as if it had happened yesterday… and this involvement began to communicate itself to Cullinane. He now read the Ten Commandments as if he were among the tribes listening to Moses. It was he who was coming out of Egypt…He put the Bible down with a distinct sense of having read the history of a real people.’ (Mitchener, 1966)

The archaeologist in The Source reads Deutoronomy five times, his understanding of the Jewish people getting deeper every time. This week as we begin our own reading of the book, for whatever number of times we each may be on, I challenge us all to open our ears, hearts and minds and see if we too can feel the essence of our deep and varied tradition from the text, as James Mitchener so clearly felt.