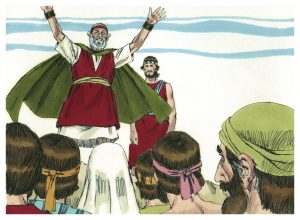 This week’s reading is the first sidra in Deuteronomy, called Devarim, which is also the Hebrew name for the entire book. In Deuteronomy 1:16, we read the words of Moses as he addresses the people, reminding of them of what he had said in the past (in the translation from the Etz Hayim Torah commentary of the American Conservative movement): “I charged your magistrates at that time as follows: Hear out your fellow men, and decide justly between any man and a fellow Israelite or a stranger. You shall not be partial in judgment: hear out low and high alike. Fear no man, for judgment is God’s. And any matter that is too difficult for you, you shall bring to me and I will hear it.” Two Hebrew words stand out in this passage, shamo’a and bein, “hear out” and “between.” Both words were interesting to our Sages. The 18th century exegete known as Or Hachaim noted the unusual use of an infinitive for hearing, rather than the more common imperative of shim’u, as well as the idea that one might somehow “hear between” two litigants, rather than simply hearing both of them, as would have been expected. Where the more expected imperative would have suggested a simple, time-bound act of listening and moving on to the next thing, the infinitive verb form for hearing carries with it the notion of continuousness. The addition of the word “between” reminds the judge that he or she stands firmly between the disputants, explicitly not on one side or the other. The judge must listen patiently to all evidence provided by the disputants; he or she must hear continuously. One cannot stop listening, having made up one’s mind, one must continue to listen to the facts as they make themselves known, not rely on prejudice or first impressions.

Similarly, judging between means that the judge cannot give any impression of favouring one party over another. Or Hachaim forbids a judge even from serenely looking at one disputant while averting his gaze from the other; this would give the impression of partiality; even more, it would risk upsetting one of the disputants and run the risk of making the presentation of his case less secure and therefore less effective.

This is all very well for judges, but is this understanding useful for those of us who aren’t judges and don’t have to decide impartially between litigants? Even though we may not have to act as judges, each of us must weigh the evidence presented to us by the world we live in. This issue was the subject of consideration by the philosopher Edmund Husserl. A recent book, At the Existentialist Café: Freedom, Being & Apricot Cocktails by Sarah Bakewell, explores some of Husserl’s ideas (as well as many others). Husserl developed a philosophical approach that is known as phenomenology, where a phenomenon is something that presents itself to one’s experience. The phenomenologist is not interested in exploring ultimate realities, but rather an individual’s experience of the world. For example, one could analyze a cup of coffee by describing the botany of the coffee plant, the processes through which it is grown, harvested and prepared, the exact method of extraction, and so forth, but this would have little to do with the experience of a cup of coffee. Alternatively, one could recall all of one’s emotional connections to previous cups of coffee, all of the purely personal, emotional attachments as they were created by a lifetime of cups of coffee, but this too would not help very much to understand the experience of this cup of coffee right now. For Husserl, it is the actual lived experience of the cup of coffee actually in one’s hand – its aroma, its colour, the hint of steam arising from it, the temperature of the cup – all of these things and many more, that make up the phenomenon of the experience of this cup of coffee now. In order to encounter it, one must set aside or bracket out all those other considerations in order to have a real experience. This experience is all we can truly know. The other ways, such as the ones that I mentioned earlier, are either hearsay or memory, both of which can mislead us. They may be interesting and useful, but we cannot know them for certain. We can, however, know our lived experience with complete certainty.

Now, the phenomenological approach isn’t the only way to look at things, but it is a liberating experience to see things as they present themselves to one’s self, not to anyone else. And in many areas of life as it is lived – the taste of food and wine, the sound of music, what people are like when we actually meet them –  this reality is the basis of all that follows from it; it is what grounds us in the most compelling reality there is. Phenomenology is particularly useful for talking about religious experiences. As Bakewell notes, we can describe these experiences as they are to us without having to prove, for example, that they have scientific accuracy.

And that, it seems to me, is the power underlying the Torah’s use of these peculiar words. When we listen continuously to the reality of experience as it presents itself to us, and situate ourselves in the immediate experience that lies between what we know from our own remembered history and what we know from other people, we begin truly to know things upon which we can rely. This is the beginning of judgment, from which all else follows. This approach does not prevent us from seeking all the other kinds of knowledge that are at our disposal, but it does get us in the habit of knowing the difference.