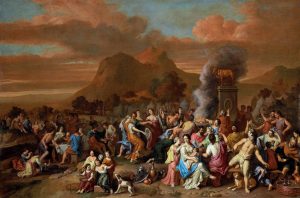 Rabbi Yochanan said: “The nail of the first generations was better than the belly of the last generations.”[1]

This statement can seem puzzling. Why did Rabbi Yochanan compare the nails of the first generations to the belly of the last ones?

The belly is the part of the body which transforms food, so that it nourishes us, whereas the nail is a tough surface which constitutes a screen between the flesh and the outside. These two parts of the body represent two opposite functions: nourishment from the world and protection from it.

Thus Rabbi Yochanan’s statement sounds as a call for change, for getting out of one’s comfort zone. How can we do it?

Our parasha encourages us to be exposed to new discoveries and become transformed by them. Indeed, it states that the Eternal fed the people of Israel with manna, “so as to inform you that the human being does not live by bread alone, but by all that comes out from the Eternal’s mouth.”[2]

However, the parasha also states that, before giving the manna to the Hebrews, the Eternal afflicted them and made them hungry. If the Hebrews had not been lacking anything, if they could have chosen between manna and food they already knew, they would probably have not tried the strange and unknown manna.

It shows that getting out of our comfort zone and seeking discoveries is particularly difficult when we feel we already possess all that we need and desire.

However, staying motionless in prosperity may not provide a long-lasting fulfilment. Indeed, our parasha warns that, when the Hebrews will be rich and settled in beautiful houses, they will be at risk of forgetting the Eternal and falling into idol worshipping, which may provoke their loss.[3]

It may mean that, when one is prosperous to the point of not being anymore in search of new experiments and knowledge, life loses its taste and its profound meaning. Overly satisfied human beings may not question their lives nor seek to draw near to the Eternal. They would be content with void idols – that is to say, with things devoid of profound meaning and transformative value.

Thus, our parasha warns us not to be content with our achievements, but to be constantly seeking new knowledge, encounters and discoveries in order to grow through them.

However, if we fell into “idol worshipping” in some way, either because we became motionless in life or because we made mistakes, is it impossible to mend it?

In our parasha, Moses recalls the mistake the people made when they worshipped the golden calf. He ground the idol into dust and threw it in the river coming down from the mountain. In Exodus, it is added that Moses made the Hebrews drink from the water filled with the golden calf’s dust.[4]

It seems important to bear in mind that the golden calf had been burnt and ground by Moses, and was not a worshipped idol anymore when it was thrown into the water. It had been transformed, in such a way that it had become something which could nourish the people.

In the same way, when we make mistakes, we can be enriched by them provided that we reflect upon them in the light of a source of knowledge, advice and wisdom. Torah can help us learn from our own errors, when we read it while reflecting on what we did wrong.

Furthermore, making errors, falling into the traps of life appears as a part of the normal process of learning, growing and improving ourselves, provided that we do not stay stuck in these mistakes.

This process of transforming negative elements into positive opportunities to grow can also be found at the beginning of our parasha. It is said that the Hebrews will “eat” all the people that the Eternal gave to them.[5]

These people can actually represent all the challenges that happen to us, either from the outside world or from within us. Our parasha tells us not to be afraid of them[6] – for fear makes us motionless, unable to overcome a situation which will keep on making us stumble. It also tells us that the change in us shall happen progressively[7] – a too quick and radical transformation may be difficult to maintain in the long term.

If we confidently and patiently face the challenges which happen to us, we will finally find out that we have been nourished and enriched by them, that we have “eaten” them.

To conclude, we can remind ourselves of a saying by Rabbi Nachman of Breslov: “It is forbidden to be old”, which can mean that our spirit shall not remain in a motionless, deteriorating state. On the contrary, we shall always be in search of growth, through all that comes out from the mouth of the Eternal.