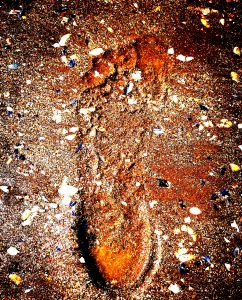 Some time ago in Paris, the summer grey sky was acting like a sodden sponge, dripping on the big glass roof of The Musée de l’Homme in Paris. I was there standing with my four year old daughter in front of a huge dinosaur skeleton.

There was, in the image of this little girl dressed in a pink rain coat, casting cheeky looks at this huge tyrannosaurus skeleton that faced her, something fascinating.

She perfectly knew that the skeleton of this animal was harmless because the species was extinct. She was doing the same thing that the first human beings had done before her. Rational explanations kept her safe from fright and she was staring at this giant’s empty eyes.

Just in front of us, was a panel that represented the various geological layers in the soil and the fossils that were discovered there. Several sedimentary layers piling up similarly as layers of cream in a french cake : a “mille feuille” , tracing the history of evolution and the age of the various fossils discovered in the soil.

This panel immediately reminded me not only that I was hungry but more seriously the different layers of the text that overlap in the Bible and the possibility of approaching this text as a multi-layered soil sample, in which one can drill and look for clues, like an archaeologist on the trace of the authors.

The scientific approach to the Bible, which is dedicated to dating books and navigating the various strata of writing, reveals that the Book of Deuteronomy is a book apart and would have been written much later than the others (VII and – VI BCE).

The traditional approach entrusts the role of author to a single character: Mosheh.

The story tells us that when he sees his face,  weaving wrinkles, his hair whitening and gradually his strengths leaving him, he decided to repeat the teaching that God has given him in turn to pass on to the children of Israel.

He’s getting old and he’s going to die, he knows that. The time is running out and one can, when we read this text, with a bit of imagination, hear the hand of Moses handling his feather rasping feverishly on the parchment. He doesn’t have any time to repeat all the details. He recalls the main things, what he considers the most important by changing hastily here and there a detail. Pursued by the anxiety that death does not strike him until he has finished to teach.

So Moses repeats again. At times, his tone stiffens, becoming authoritative while repeating the terms of the commitment on Mount Sinai. In 2nd the paragraph of the  Shema Israel which is in this parashah Ekev. It is written:

If you keep my commandments, then you will be fulfilled. But if you do not do this, “you will soon be cut off from the good land which the LORD gives you”

This arithmetic of reward and punishment is widely spread in our tradition.

Isn’t it used in daily language and in some circles the expression “being acquitted of a mitzvah” as one would be paying a debt off?

Anyway the title of the parashah  “Ekev” means on the one hand “Reward ” “conséquence”  but ” heel of the foot “and” footprint ” as well. Just as if our actions and their consequences were printed in the world as footprints by the strength of the heel.

The text tells us: If you keep my commandments, then you will be blessed. If you do not, you will disappear.

Looking more closely, there is both something incoherent and quite scandalous in this idea of ​​”retribution” considering the rarity of the righteous living well and the frequency with which the evil are materially fulfilled and living a long time.

Let us also remember dark times of history, such as the persecutions of Emperor Hadrian, where the observance of the commandments was the cause of death and suffering …

Our fate does not say anything about our moral qualities.

But it is precisely at that period when a great theological revolution happened.

If the righteous suffer, they would anyway be rewarded after their death or it could be a sign of love from God (Yissurin shel Ahavah) as well. But if the creation of this process resolves some inconsistencies, the principle of retribution remains central in rabbinical literature and echoes in the fulfillment of each of the precepts.

A world where bad people would be systematically punished and the righteous people rewarded would make piety a matter of opportunism because the main motivation for virtue would be the fear of punishment or the lure of the reward.

This mechanical logic has an answer to everything, excluding the eventuality of doubt, or questioning.

The Talmudic concept of “measure for measure” says that punishment stands with the same measure of the sin. The “retributive logic” is a cold blooded way of thinking, so mechanistic, giving to tragedies the aura of divine justice.

A question mark raised above the possibility of retribution is the only assurance of a selfless act of a human being, that is, an act of love.

God advises Israel to follow His voice and tells the people that they will be  exposed to destruction if they does not so. But they are free to not follow this advice.

We can interpret that God presents the chain of events in terms of cause and consequence and not reward and punishment. The former make us aware of our responsibilities and respects free will, an essential condition of the human being since Adam left the Garden of Eden, the other infantilizes, placing humans beings between the carrot and the stick.

“Consequence” and “reward” both of these meanings are contained in the single root of the word Ekev, title of our parashah.

Whenever we’re in front of children, in the exact way of Moses with the children of Israel, we face this educational dilemma:

Surrendering to the game of the carrot and the stick ? That is to say, threat and reward ?

Or similarly to the geological exploration on this panel in the Musée de l’Homme in Paris picturing the layers of the soil just as the layers of cream in a “mille feuille” ? Digging for meaning and coherence in the soil just as in a cake with a fork and, thus comforted with cream and information, teaching our children how to cast cheeky looks and defy the riddles of past!