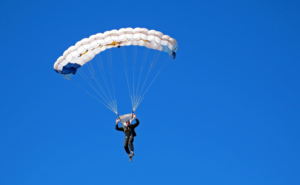 I suspect most of us know someone who’s done a stunt for charity. It’s very common – marathons, triathlons, swimming the Channel. But parachuting for charity can be more trouble than it’s worth. A 1999 study by the Perth Royal Infirmary in Scotland concluded: “Parachute jumping for charity is not cost-effective in raising money as the cost of treatment of the 11% who are injured is far in excess of any money raised by the rest.”

In fact, the authors calculated, every pound raised for charity by a parachute jump costs the NHS £13.75 in medical care for those participants who hurt themselves in the process. Since then, charities have tended to discourage parachute jumping as a form of fundraising.

This week’s parasha includes the startling revelation, in one throwaway line verse (Deuteronomy 8:4), that during the whole 40-year wandering-in-the-Wilderness period, the Israelites’ clothes never wore out.

Everlasting clothes are maybe the ultimate something-for-nothing offer. The idea has spanned the centuries, from the fairy-tale of The Emperor’s New Clothes to the Ealing comedy about The Man in the White Suit which repels all dirt.

But, of course, the Emperor’s new clothes turned out to be a total scam, and the white suit disintegrated after just a few days of use. So the only recorded successful example of everlasting clothes is found in the Torah. But were they really successful?

A midrash (Deuteronomy Rabbah 7:11) records a conversation between Rabbi Eleazar and Rabbi Simeon ben Yose. Rabbi Eleazar asked: “Did the Israelite children not grow so that the clothes became too small for them?”, to which Rabbi Simeon replied: “When the snail grows, its shell grows with it.”

Rabbi Eleazar then asked: “Did the clothes not need washing?” The reply: “The pillar of fire rubbed against them and whitened them.” This led to another question: “Seeing that the pillar consisted of fire, were they not scorched?” Rabbi Simeon’s response: “As their clothes were of heavenly make, the pillar rubbed against them without damaging them.”

Rabbi Eleazar was still not satisfied: “Did vermin not breed in them? Did they not emit an evil odour because of the Israelites’ perspiration?” But Rabbi Simeon had an answer to this as well: “The Israelites used to play with sweet-scented grasses.”

So where does the parachute come into it? Well, what I find startling about Rabbi Eleazar’s questioning is how reasonable his questions were. Everlasting clothes are all very well, but the miracle blinded everyone except Rabbi Eleazar to the practical questions. What if they didn’t grow alongside their wearers? What if they did come to reek in the heat of the Sinai desert? If God hadn’t provided for those contingencies, the garments would have been useless, miracle or no miracle.

We don’t know whether the Israelites asked the same questions as Rabbi Eleazar, but they would have been quite right to do so. It’s not ingratitude to seek to ensure that a gift will fill a need and not just become another burden, just as the Royal Free Hospital would try to dissuade me from doing a parachute jump that would cost it valuable money and bed space if everything went wrong.

Rabbi Eleazar’s questioning of a miracle was audacious, but serves as an important reminder to any of us who ever give or receive any help or donations of any sort. Which is probably all of us.

When one receives support of whatever kind, it’s perfectly proper to ask about what is available and how to make it work best. Being given a set of everlasting clothes that retain everlasting stains and stink everlasting smells would have been worse than useless, and Rabbi Eleazar’s astute intervention made sure that that didn’t happen.

And similarly, when we’re the ones delivering tzedakah or carrying out acts of tikkun olam, it’s not rude to ask what the beneficiary needs. This not only ensures against pointless gifts of smelly clothes, but it grants the recipient a voice and a role, some agency, rather than just assuming them to be a mute recipient of charity.

This parasha is an opportunity for us to remember the importance of openness and dialogue in society – only that can help us help others, and receive help, as one united humankind and as God intended.