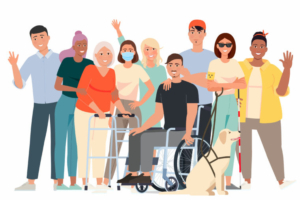 In my experience meaningful change does not come about through simply learning about people; it comes from intimate, personal relationships with individuals who hold different narratives from our own. For me one of the most challenging aspects of reading Torah is its tendency to ‘other’; even when discussing the Israelite people themselves. Our most sacred text outlines a clear, functional conception of the normative types of people that existed within Israelite society. First are the Kohanim (Priests), from the tribe of Levi and direct descendants of Aharon, who acted as keepers of Tabernacle, and later Temple, practice. Second are the Levi’im, also descended from the tribe of Levi but not specifically from Aharon, who had limited roles in Tabernacle practice. Finally are the Yisraelim, who are the descendants of the remaining 11 tribes of Israel (as well as those who joined the Israelites from other nations). This final group, into which the majority of Israelites fell, had no administrative responsibilities with regard to the Tabernacle; their service to God was, at least in part, fulfilled by the Kohamin and Levi’im.

Today the vast majority of progressive communities no longer acknowledge these distinctions; though these divisions continue within Orthodox and Masorti Jewish communities. There are several reasons why progressive movements reject these divisions; 1) They represent pre-rabbinic practice and, as the Affirmations of Liberal Judaism states, “We affirm our belief that the Synagogue has permanently replaced the Temple. Accordingly, we recognise no distinction between persons of priestly descent (kohanim).” The Central Conference for American (Reform) Rabbis further explains that, “in the absence of such a purpose or interest, it would arguably be unethical for us, as a movement dedicated to an egalitarian vision of Judaism, to maintain such distinctions in any form, even if it be “gender-neutral” in its structure.” Whilst some progressive Jews may, if only in passing, acknowledge that particular surnames invoke a connection to a particular lineage; this type of status has no practical bearing on the way we treat each and every member of our communities.

Whilst priestly descent no longer plays a role in our communal practices there are unfortunately other distinctions that remain. Parashat Emor – this week’s Torah portion – further subdivides the priests into those who are physically complete and those, “who have within them a physical blemish” (Lev. 21:16). In this latter category the biblical texts includes: “one who is blind, or lame, or has limb that is too short or too long; no one who has a broken leg or a broken arm; or whose spine is abnormally curved (kyphosis) or is of restricted growth (dwarfism)…etc…” (Lev. 21:18-19). The biblical text concludes that such a person is forbidden offer food to God lest they, “profane these places sacred to Me, for I Adonai have sanctified them” (Lev. 21:23).

Several rabbinic commentators suggest that having a ‘blemished person’ represent the whole Jewish people before God would be disrespectful, as the French, 13th century biblical commentator Chizkuni summarizes, “it would not seem appropriate that this community dispatches blemished people as their representatives at the Court of the King of Kings.” Perhaps this perspective derives from a particular understanding of the verse in Bereshit (Genesis) which states, “And God created humankind in the divine image, creating it in the image of God [B’tzelem Elohim]” (1:27). Or, as Adele Berlin and Marc Zvi Brettler put it, “The priest, as God’s palace servant, profanes the abode of the deity if he cannot adequately reflect the divine form; only the fully formed specimens of the image of God can service in His [sic] earthly habitation”.  Of course, since at least the 12th century, Jews began to embrace the idea that B’tzelem Elohim referred not to God’s physical attributes, but to divine attributes only. I suspect that the biblical injunction against allowing those with disabilities to directly serve God says little about an understanding of God and more about people’s own insecurities and prejudices.

hilst we strive to be inclusive and welcoming, we may still feel uncomfortable when encountering those who are different. I believe that the intention here is good; we genuinely want to create spaces in which everyone can gather. However, whilst we are full of generous intentions we often lack meaningful relationships with those who we seek to include. A congregant with random or uncontrollable movements; a colleague with muscle weakness which requires them to use a wheelchair; or a friend who is visually impaired – are we really making it possible for such people to integrate fully into our communities? We need to realise that it is us, as a community, that truly benefits from such multifaceted, interconnected relationships. As the human rights lawyer and disability advocate Melinda Jones correctly concludes, “Wholeness is not about body worship or external image. We can only be whole when we embrace all of each other as equals in value and dignity; while acknowledging our different needs and qualities.” With this in mind we must be conscious that physical ‘wholeness’ does not have a single form; all bodies are complete!

As you journey through Shabbat I encourage you to reflect on those people with whom you have meaningful relationships; how many differ from you in their relationship with disability, gender, religion, ethnicity…and much more besides. One’s answers may provide a surprisingly accurate gauge as to their ability to accommodate differences and to recognise the divine image within each being.