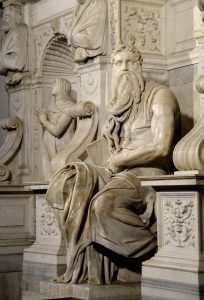 In Parashat Ha’azinu, God’s choice of the Children of Israel, and bringing them forth from Egypt, are dramatized in part of Moses’s ﬁnal speech—delivered in the form of a seventy line song. Here, I will pursue only one of that song’s highly charged images: from Deuteronomy 32:13, here in JPS’s translation:

He [God] set him [Israel] atop the highlands,

To feast on the yield of the earth;

He fed him honey from the crag,

And oil from the ﬂinty rock…

The midrash identiﬁes these ‘highlands’ with Israel and, especially, the Temple mount. Rashi agrees with the midrash Sifre in identifying the ‘oil from the ﬂinty rock’ with the Olives produced in the rocky terrain of Gush Halav—now the Maronite and Israeli Arab village of Jish, in the Upper Galilee. Commenting on the ‘honey from the crag’, though, Rashi brings a somewhat obscure midrash, also from Sifre, here in the Soncino translation.

Indeed it once happened that a man said to his son in Sichnin (a town in Galilee): “Bring me dried ﬁgs from the cask”. He went and found the honey ﬂowing over its brim. He said to him, “But this is a vat of honey (not of ﬁgs)”. Thereupon he said to him: “Put your hands deep into it and you will bring up ﬁgs from it”. (Sifre)

There is a certain narrative charm in the midrash, but how does it relate to the biblical image at hand? This is the question I would particularly like to consider here. Ibn Ezra, who was certainly familiar with the midrash, chooses only to read the Torah’s image as a fairly straightforward metaphor, writing:

This is a ﬁgure of speech, like “the mountains shall drop down sweet wine” [Joel 4: 18],

meant to convey the abundance of honey, and of oil, which are exported from the land of

Does Rashi’s midrashic comment on the image imply that he reads a greater signiﬁcance in the verse than Ibn Ezra? Sifsei Chachamim and Bartenura, eminent super-commentaries on Rashi, understand his invocation of the ﬁgs and the honey in the midrash only in a fairly straightforward metaphorical sense, along similar lines to those of Ibn Ezra:

Dried ﬁgs are hard like rock, and even so there was honey on them. Therefore they would

And yet, neither Bartenura nor Sifsei Chachamim really address the difﬁculty at hand: what is Rashi doing by commenting so obliquely on what, as Ibn Ezra has shown, might be read as quite straightforward metaphor? Why does Rashi bring this peculiar midrash, a question made all the trickier by some of the ways in which the midrash apparently reverses the categories of the biblical metaphor in question.

After all, reaching into a rock and drawing out honey works as a metaphor because the end result is so much sweeter than one might have anticipated when reaching for the rock. The metaphor also looks—with bitter irony—back to the ‘crime’ for which Moses has been sentenced never to see the land of Israel. Additionally, the metaphor speaks poignantly to the condition of the Israelite’s in the desert for forty years, sustained only by Divine hesed. By contrast, Rashi’s midrash occupies a murkier metaphorical ground: ordered to obtain ﬁgs (sweet, but also hard and with a sour edge), the boy in fact ﬁnds a barrel not only full, but overﬂowing with honey. It is only by reaching his arm deep into this barrel of honey (a highly textural image with an at best ambivalent signiﬁcance) that the boy can obtain the ﬁgs his father demanded. We remember that God commanded Moses to draw water from the rock for the Israelites; what are the corresponding allegorical signiﬁcances here? Presumably the boy, who is unsure how to obtain that which is requested, corresponds somehow to Moses; but is the father who demands ﬁgs resembling the Children of Israel who demand water, or is he like the God who directs Moses as to how to obtain water? In the Torah text the ‘rock’ seems to symbolize the desert, within which God fed and watered the Children of Israel. In the Midrash, by contrast, the Barrel overﬂowing with honey seems more likely to represent the Land of Israel.

Perhaps an additional source of meaning in the midrash lies in a now largely forgotten use of honey. When Alexander the Great died in distant Babylon, his court attempted to transfer his body back to Macedon preserved in honey. This process of mummiﬁcation—technically known as melliﬁcation—was moderately widespread in the Ancient Near East, and certainly was used in Egypt to mummify bodies within barrels. Honey is still used to a limited extent as a preservative, but let us imagine (with what historical basis I honestly do not know) that the author of the midrash was familiar with ancient practices of melliﬁcation. When the boy discovers what must have been an unusual sight, a barrel literally overﬂowing with honey, perhaps he comes to what might have been the sensible conclusion for the time. Like Nelson’s posthumous shipmate sent below deck for a tot of brandy, the boy might have faced this barrel of honey terriﬁed that within might lie a human corpse. Perhaps reaching his hand into the barrel of honey at his father’s direction was not only an ambivalent action, but a thoroughly terrifying action—facing the boy with the basic anxiety of reaching into a thick and murky container unsure what he would ﬁnd. In such a case, ﬁnding only preserved ﬁgs would surely be a blessed relief; a sign that the father’s direction was benevolent and true. The boy need not have had any fear of this murky barrel—it is a preserve of fruit, and nothing more disconcerting. The Children of Israel ventured into the stony desert, but there they found unlikely sustenance.

For the metaphor to hold ground, for the midrash best to speak to the Torah verse to which Sifre and Rashi apply it, the barrel of honey needs to hold some sort of ambivalent signiﬁcation; it cannot be simply the metaphor of overﬂowing gorgeousness which Ibn Ezra suggests. I wonder if the ancient practice of melliﬁcation offers some insight into this particularly obscure Rashi—but, then again, perhaps not.