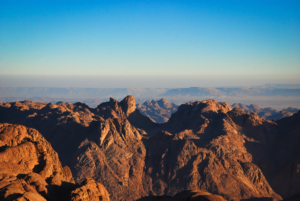 People who find out that I’m a rabbinic student often ask me which community I’m part of. Well, in just the last couple of years, I’ve spent time with quite a few communities, including Wimbledon, Southport, Manchester, Cardiff, Ealing, York, Sarajevo, Split and Vienna. So the answer is… kind of nowhere.

Moses was something of a migrant too. In the first verse of our Torah reading this morning, he called on both the heavens and the earth to hear his final great speech: “Give ear, o heavens, let me speak; Let the earth hear the words I utter!”[1]

The 3rd-century Rabbi Shmuel bar-Nachman explained this with a parable:[2] “A general held office in two provinces, one a Roman province, the other a Persian province. Being about to make a feast, he said to himself: ‘If I invite this set, the other will be offended, and if I invite that set, these will be offended.’ So what did he do? He invited both the one and the other. So it was with Moses. He himself was born on earth, but he became great in heaven. He said to himself: ‘If I call upon the heavens the earth will rage, and if I call upon the earth the heavens will rage.’ He therefore said: ‘I will call upon both of them, the heavens and the earth.’”

Having roots in several places can be a joy or it can be a solitary experience in which none of them is, itself, home. For Moses, I suspect the latter. No physical home. No emotional home. He had one foot in this world and one foot in another, always the bridge between the two, always suspended, never fully grounded in any single place.

He gives one final anguished song, the valedictory speech to beat all valedictory speeches, pouring out his bitterness to an audience in both his heavenly and earthly bases. Moses is the ultimate tragic figure of the Hebrew Bible. For sure, Jonah was dragged out of his home and humiliated in front of the Ninevites by giving a prophecy of destruction that never came true, but at least he had the option of going back and rebuilding his former life.

Moses’s past was erased at every step of his journey: his family had to put him into the river, so he became an Egyptian prince. Then he burnt his boats with the Egyptian royal family by threatening them with plagues, so he led the Israelites into the wilderness. Then the Israelites were to leave the wilderness, and he couldn’t go with them.

We have no Moses-es in our communities any more. The days when people would be involuntarily stretched between heaven and earth are over. Yet we do have the transitory, the itinerant, the unsettled, the lonely, those without emotional homes, sometimes those without physical homes. It may not always be obvious that these people are among us, or rather, that these afflictions reach deep into our communities. The Israelites were very possibly painfully unaware of Moses’s inner turmoil.

Rabbi Chaim Stern reminds us:[3] “May we become ever more sensitive to others’ spoken and unspoken pleas for sympathy and help: those who struggle vainly for attention; and those who shrink with fear at another’s touch; those whose faces we forget from one encounter to the next; and those who never seem to find a resting-place in the family of the secure; those whose ambition exceeds their skill; and those whose early promise has dimmed to small achievement; those who wait for news which never comes; those who are alone, unloved, with none to love; and all who are bereaved, deserted or neglected.”

There is, however, one more figure in the Bible to whom many of Rabbi Stern’s words apply equally well. That’s God. God also becomes split across heaven and earth, dwelling in one place but infinitely concerned with the other, never quite finding happiness in either. God, who struggled vainly for attention as the Israelites continually turned to idolatry. God, whose face was forgotten by the rebels in the wilderness. God, ever ambitious on humanity’s behalf, yet ever disappointed in having failed to create a people that can live decently, ethically and within its means. God, יהוה אחד, One, always One, always alone, without equal, without companion.

The great Talmud scholar Rabbi Saul Lieberman said:[5] “One can – and must – love God. One can challenge God and even be angry with God, but one must also pity God. Do you know which of all the characters in the Bible is most tragic? It is God, ever to be blessed, God whose creatures so often disappoint and betray. Midrashim so often tell us, ‘And God wept…’ – as if to say, ‘What have you done to My work?’ Perhaps God shed more tears in the time of Treblinka, Majdanek and Auschwitz, and one may therefore invoke the name of the Eternal not only with indignation but also with sadness and compassion.”

The whole Torah is a story of homecoming, but despite it ending with the Promised Land, the Jewish people never quite found a home. We have always been wanderers. Some of our journeys have been forced, some voluntary; some were aspirational, in search of a better life, while others were desperate flights to preserve life.

Having one foot here and one elsewhere is the Jewish experience. It’s a bond that brings us together. It’s the commonality which means that when I walk into a synagogue in Wimbledon or Manchester or Southport or Sarajevo, I feel part of the community. Jews have managed to turn our rootlessness and our disparateness, our lack of control and our susceptibility to external forces, into a tool for togetherness.

If we recognise that God, too, was afflicted by these, then – give ear, o Heavens, and let the earth hear these words – this can only bring us closer to each other and to the Divine. Kein y’hi ratzon: may this be God’s will.