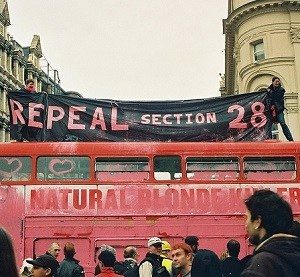 If anyone watched the first series of Big Brother, that aired on channel 4 in the year 2000 you may remember the participant, Anna who was a lesbian former nun. She did not win the series and yet she is the only participant that I can remember from that or most other series of Big Brother. A niche reference I know, and yet she stuck in my mind. I imagine that that is because as a child who went to school in the 90s, she was the first LGBT+ person I saw represented in a positive light. Other ‘outed’ celebrities were scandalised. The only time a person would hear ‘gay’ at school would be in the homophobic colloquial put down ‘that’s so gay’ or worse if there was overt and directive homophobic bullying.

While my peers across the pond in America were already building ‘gay straight alliance’ societies at their schools, in England we were living through the enforcement of section 28. Almost exactly 31 years ago Margaret Thatcher introduced ‘section 28’ which stated that that a local authority “shall not intentionally promote homosexuality or publish material with the intention of promoting homosexuality” or “promote the teaching in any maintained school of the acceptability of homosexuality as a pretended family relationship”. The ripple on effect of this law meant that teachers and pupils alike could not be openly LGBT+ nor were any relationships other than cis gendered, heterosexual relationships discussed. The lack of language and role models for young people during that time left thousands of young people venerable and held people back from being able to access safe and sometimes life saving information.

Since then the world has come a long way, just two years after the retraction of section 28 civil partnerships were introduced, with Liberal Judaism coining the first ever commitment ceremony for same sex couples. Ten years after that equal marriage was introduced, once again with progressive Judaism at the forefront of that political change. Now, thirty one years since the introduction of section 28, parliament debates as to whether or not LGBTQ+ relationships should be taught in school as part of a new inclusive curriculum. While some schools are already trialling the curriculum, others are seeing mass walk outs with parents taking their children out of school and the debates amongst politicians and parents alike can sometimes feel like we’re back in the 80s and 90s again.

In this week’s parashah we find the laws of forbidden sexual relationships. These contain within them, incest and bestiality but also the painful and corrosive text that has been used to justify homophobic violence throughout the world, 20:13 ‘if a man lies with another man as he lies with a woman, the two of them have done an abhorrent thing and shall be put to death…’. Just like our parliament, the rabbis had an opinion on how relationships should be taught. In Mishnah Chagigah 2:1 it reads, ‘one must not expound on the laws of forbidden sexual relations before three people.’ It is understood that this text means one must not talk about these laws in front of more than two people. The rabbis could have feared that the text would have become an entertainment piece or maybe, like the debates we see today, there was a fear that if read more publicly people would get ideas or be influenced by the knowledge.

Today, progressive communities often omit the painful parts of Torah to avoid the harm they can cause. Sure enough, this week both the Liberal and Reform lectionaries avoid Leviticus 20:13. Unintentionally, our synagogues are enacting the text of Mishnah Chagigah, leaving the painful text to be discovered by people in more private settings. The fight to teach about varying relationships in our schools is not only a recognition that we are a diverse society but also because this recognition keeps people safe.

Sixteen years after the abolition of section 28, in a world where marriage is more equal and the language to talk about gender and sexual identity is evolving at speed, statistics show that LGBTQ+ young people are still at high risk of bullying, homelessness, poor mental health and suicide. We are no longer in the age of silencing the problem. It is time for us to come face to face with our difficult texts as a community, to acknowledge their pain and the harm they can cause in a safe space. In doing this maybe we will not only get closer to the words of our Torah but also to each other.