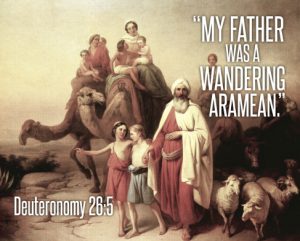 Life is a journey, not a destination – these words of Ralph Waldo Emerson resonate with the narrative of the Torah, which devotes 4 books to the description of the journey through the wilderness and concludes on the cusp of the Israelites entering the Promised Land. The fact that we start reading Torah from the beginning immediately after Moses’ death attunes us to our place in history, to the fact that we might not live to see the fruit of our labour. This recognition of our meaningful contribution to the grander scheme of things is best expressed by the famous injunction of Rabbi Tarfon, who in Pirkei Avot 2:21 stated, ‘it is not incumbent upon you to complete the work, but neither are you at liberty to desist from it’.

As Progressive Jews, we take Rabbi Tarfon’s words quite seriously, and often quote them in relation to our involvement in social justice projects, which – hopefully – will usher in the messianic age one day. However, our Progressive focus on an eternally moving target of social justice envisioned by the prophets can make us overlook the verses in the Torah that describe actions that we need to take when we reach our journey’s destination. This week’s parashah, Ki Tavo, opens with a description of the steps the Israelites were supposed to take upon reaching the land of Israel. Once they resided there long enough to see the first fruits of their produce, they were supposed to find a priest and offer some of these fruits. During successive stages of this offering ceremony, an Israelite was supposed to make the following statements:

“I declare today to the Eternal your (the priest’s) God that I have come to the land the Eternal swore to our ancestors to give us.”  (Deuteronomy 26:3)

“My father was a wandering Aramean, and he went down into Egypt with a few people and lived there and became a great nation, powerful and numerous. But the Egyptians mistreated us and made us suffer, subjecting us to harsh labour. Then we cried out to the Eternal, the God of our ancestors, and the Eternal heard our voice and saw our misery, toil and oppression. So the Eternal brought us out of Egypt with a mighty hand and an outstretched arm, with great terror and with signs and wonders. He brought us to this place and gave us this land, a land flowing with milk and honey; and now I bring the first fruits of the soil that you, Eternal, have given me.”  (Deuteronomy 26:5-10)

It seems that the purpose of these declarations was to mark the impact that the changes in the way of life of the Israelite community had on its individual members. As such, this ritual was designed to help individuals express their experience of being members of a larger community.  By taking an active role in this ceremony, a male Israelite had to acknowledge that his nation’s past was a mixture of glory and hardship. What is more, each Israelite had to show gratitude for the accomplishments of today, which he was supposed to express even during the pioneer days of the Israelite conquest of Canaan.

It is the very connection of this ritual to the conquest of Canaan that could prompt some of us to dismiss this ceremony. After all, it does instil a nationalistic identity which justifies modern conquest by referring to past suffering, which sounds not unlike actions of politicians in today’s Israel, North America, Europe and Britain. However, the very fact that this ritual found its way into the Torah testifies to the longevity of the human need for ceremonies explaining the impact that geopolitical changes have on the individual lives of ‘common folk’.

I would argue that the lack of compelling narratives that would explain national and global history within a framework of progressive values is one of the factors enabling the current rise of nationalism and right-wing populism. Therefore, today, in a time when history is used by the populists and nationalists to justify their exclusionary and discriminatory policies, it is not enough to respond to these challenges by referring solely to the prophetic promise of the messianic age. Conversely, as Progressive Jews, we need to delve into our texts to prove that our tradition, unlike modern populists and nationalists, is able to acknowledge that our past is complex. I believe that the simple statement that ‘my father was a wandering Aramean’ is a very powerful argument in the current political discussions which often justify modern political decisions by referring to one-sided interpretations of the past. By saying that ‘my father was a wandering Aramean’ (but my position is different today) we can create a language of debate that looks at history more critically. Admittedly, it’s not easy to change the language of public debate. But who knows? Maybe – if we start now – we will become a force to be reckoned with, just like the Israelites ultimately did in Egypt? Ken Yehi Ratzon!