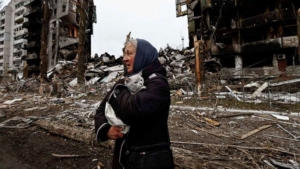 In the dog days of summer we find ourselves in the dog days of Deuteronomy, as Moses’ final peroration to his people on the east bank of the Jordan moves inexorably to its climax. The most memorable part of this parashah is that which is found reproduced in our haggadot, Arami oved avi, a wandering Aramean was my father, interpreted to mean the patriarch Jacob. [26.5] But there is much, much more in Ki Tavo than this well known phrase.

Ki Tavo goes to town on the berakhot u-kellalot, the blessings and curses, found also towards the end of Leviticus. There is plenty of positivity in the blessings, but the curses, set out in almost indecent detail, wave a massive threat in the face of everyone and make it clear to them how abysmal their lives will be if they disobey God and God’s commandments. And the detail, such as that in 28.16-35, would seem most likely to have come from the actual experience of the writer, or have happened during the writer’s lifetime and been well known.

The kellalot are verses to read with a shudder, for they contain some terrible phrases. What strikes you as being the worst may not strike me in the same way, but there is one very short verse (it only has six words) that resonates like the clang of a huge bell. 28.34 says:

Ve-hayyita meshuga mi-mar-eh eynekha asher tireh: translated by Robert Alter as ‘And you will be crazed by the sight of your eyes which you shall see’, which stays faithful to the repetitive nature of the Hebrew original but doesn’t have the impact that is also inherent in the text. The Koren Tanakh has a better rendition when it states: the sights you see will drive you to insanity.

I suspect that I am not alone in finding the current situation in which humanity finds itself overwhelming. I am reminded of one of the curses of Amos when he said of the Day of the Lord: it is darkness, not light; as if someone fled from a lion, and was met by a bear; or went into a house and rested a hand against the wall and was bitten by a snake. [5.18.19]

If it’s not Ukraine it’s political instability at home; if it’s not sky high petrol prices its rising food costs; if it’s not worldwide famines it’s the potential damage to Europe’s largest nuclear reactor; if it’s not inflation it’s the Energy cap; if it’s not wildfires across the world it is the melting of the Greenland ice cap; if it’s not unbearable temperatures in the UK it’s unbelievable heat in the Arctic Circle; if it’s not flight cancellations it’s strikes, and on and on.

This is just a summary, and an incomplete one at that, of some of the most worrying situations at home and abroad. What makes it so bad is the fact that it is hard to see improvement in any areas, and we are all anxious, fearful and stressed as a result.

Of course, there have always been times of turmoil in human history – the 20th century included two World Wars – but it is hard for we who did not have that experience to think of anything that is more threatening than the state of the world at this point in the 21st century. It isn’t so much that bad things are occurring in the world, we know and accept that, it is that so many are happening at the same time and the current crop of key politicians are dictators, fascists, over-promoted incompetents, corrupt, short-sighted and lacking in vision. Add to that combustible mix leaders of nuclear powers who seem ever more likely to press the button; and even if they don’t destroy the world, they will kill many millions of people.

The challenge facing us now is that no one anywhere seems to have the creativity to find solutions or the will to see them through; and what drives me to the point of insanity is the fact that a cruel despot, failing to destroy his neighbour, is using his natural energy supplies to drive the economies of Europe into a dangerous place threatening the fabric and cohesion of many nations. As if that isn’t bad enough we then have elected politicians redoubling their efforts to find new sources of fossil fuels instead of investing in renewable sources of energy which might, just might, bequeath to our grandchildren a less inhospitable world.

… the sights you see will drive you to insanity.

This D’var Torah was written before the news about Her late Majesty, Queen Elizabeth 2, z”l, was announced.

A further reflection will be circulated in coming weeks.