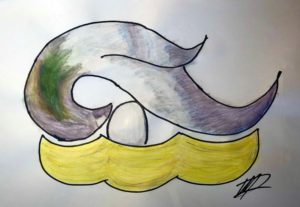 Cut through the sky

Fly to wherever you want

There’s an eagle in the sky

It was mid spring in Kew Gardens, Queens, my little slice of New York, and my parents were visiting from California. In my first post-uni flat I didn’t have a great deal of space, and this had generally meant displacing me to the sofa while my parents slept in my bed. They never had to ask, and I never imagined another way. For this particular visit, I am certain that my mother anticipated an argument when she called to say that they had booked a hotel not too far from me, that this was their vacation, and I shouldn’t worry about not seeing them enough. It took me a few days but I did call back to apologise, and, in the end, they really weren’t too far away. My mother was helping me prepare dinner for Shabbat that Friday afternoon, which we would be eating on a folding card table, my stand-in for a proper dining set. She took a short break from the heat of the kitchen, stepped outside onto the high balcony and, leaning back in, whispered intently for me to come. You see, I had this particular pest problem. Several times a week I would have to shoo away a pair of pigeons who used my balcony as their roost. At least once a fortnight I would need to disassemble a nest and discard it, as this was no place to raise an avian family. But this time I hadn’t been quick enough. This particular spring day, my unwanted neighbors had added one more potential member to their ramshackle roost. It was so very small, almost pure white, and seemed too delicate to be real, this egg peeking harmlessly out from under its mother, who eyed us warily, ready to fly at a moment’s notice. We stood in the doorway, regarding the fledgling family in all of their potential, with palpable anticipation at the unsavoury task which awaited us. As the recipient of a relatively thorough religious education, I considered myself well-versed in the strangeness of certain obscure biblical mitzvot, but it was my mother who sprung into action, shooing away the mother and scooping up the nest in a dishrag. “It’s a mitzvah, you know,” she said with a wry grin, but discernible sadness in her eyes, and I followed her out of the flat, down the hallway to the garbage chute, into which she deposited nest and potential nestling as one.

The irony of a grown child and his mother coming together to send away a mother in order to dispose of her unborn child was not lost on either of us. Parshat Ki Teitze gives us more than 70 separate commandments, a number of which seem to be backed by discernible logic, and several which leave us scratching our heads. Shiluach haken, the mitzvah of sending away the mother bird to take her young (Deut 22:6-7), may or may not have been accurately enforced on this particular day, as the text of our sedra is unclear regarding whether or not we are taking the egg or baby bird for food when we shoo away the mother, however this just happens to be one of those mitzvot which leaves us asking “why” for want of a real explanation, knowing none is forthcoming. The Sages disagree on this as well, with some saying that it is about preserving the mother bird from emotional pain when taking her child, while others maintain that it is merely one of those unexplained mitzvot which keep us on our toes. The one clue we do receive from the text is that letting the mother go while taking her young will enable us to live a long life (Deut 22:7). Maimonides, in his 12th century “Guide for the Perplexed”, saw this as an act of mercy meant to make us more aware of each other, animals and people alike. “If the Law provides that such grief should not be caused to cattle or birds,” wrote Rambam, “how much more careful must we be that we should not cause grief to our fellow men” (Guide for the Perplexed 3:48).

A mother and child come together to send away a mother and destroy her potential child. A mitzvah has been performed, and the Divine will is met by human action. Is this mercy? A mother is protected from the grief of watching her child needlessly destroyed. Is this, too, a mercy?

“My chicks left the nest

spread their wings and flew away

I am an old bird left in the nest

I hope that all will be well

I always knew the day would come

But now it comes to me so suddenly

So no wonder I am a bit worried

Cut through the sky

Fly to wherever you want

There’s an eagle in the sky

In his classic Hebrew song, Arik Einstein writes of the alternate reality in which we do not encounter this mother bird and her egg. The mother sits diligently upon her potential offspring, protecting it until, through sheer tenacity and the will to live, a small fragile chick breaks its way through its erstwhile home and meets its mother for the first time. She fawns over her child, feeding it, protecting it, nurturing it, and slowly it grows strong. One day, she watches with elation, and no small amount of trepidation, as her baby takes to the sky for the first time. The world contains so many wonders and so many dangers, and this is the natural course of things. However, these events do not come to pass. On a spring day, one erev Shabbat, a mother bird is sent away, her egg snatched and her home destroyed, and this, perhaps, we call mercy.

“Grant me understanding, that I may learn Your commandments…

O God, Your mercies are many; grant me life according to Your ordinances.”