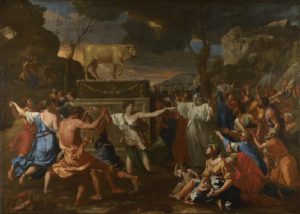 Moses was late. He had been staying on the top of Mount Sinai for forty days and forty nights. The Hebrews felt anxious. Why was he not back? What happened to him?

A Midrash tells that Satan confused the Hebrews, making them believe that Moses was dead. This “Satan” can represent the exaggerated anxiety that we may experience when a child, a parent, a friend, a loved one is late and cannot join us. Not knowing the reason of the delay, especially when it is abnormally long, can sometimes lead to nightmarish thoughts. In such situations, we may call someone susceptible to have news from the missing person. If the person seems to have really disappeared, we may even call the police. In the meantime, we may walk endlessly in the house, trying unsuccessfully to think about something else, or pretend to read a newspaper and look frenetically at the window. However, in response to that situation, most of us would not make a golden calf. So why did the Hebrews make one?

We may suppose that they did it out of a spirit of rebellion against the Eternal or Moses, who seemed to have abandoned them. Maybe the last words are the key ones: the Hebrews felt abandoned, despaired, frightened. This is the major reason why they wanted the golden calf. Indeed, if they had really considered this idol as a god, they would have tried to protect it when Moses destroyed it, as Nahmanides points out. But they did not. They did not even protest. It shows that the golden calf was not really important to them – rather, their frenzy to make it and worship it seemed to hide a more complex, more profound process than mere disobedience or rebellion.

According to Nahmanides, when the Hebrews asked Aaron to make them a god which would show them the way, they actually asked him to make them another Moses. Indeed, the Israelites say about Moses that “he made them go out of Egypt” and they say exactly the same thing about the golden calf, as if they were transposing Moses’ characteristics to it.

But, if the Israelites wanted another Moses to replace the one who had disappeared, why did they not seek a new leader? How could a mere statue replace Moses?

Maybe they actually considered Moses as irreplaceable. Trying to find him a successor was pointless: they thought that no other human being would lead them as Moses did. But they still needed to feel Moses’ presence, to be comforted from his loss, to have “something” which could alleviate the terrible reality: Moses was not there anymore.

Thus, it seems that the true “idol” of the Hebrews was not the golden calf – it was Moses.

Moses was their guide. They would never have gone out of Egypt without him. He judged them, he instructed them, and he solved all their problems with the help of the Eternal, regarding food, water, enemies to fight. So the Hebrews had become dependent upon Moses. If he disappeared, they would be lost in a hostile environment, unable to keep on journeying towards their Promise Land. They had been slaves for a long time, deprived of the freedom to make choices, to lead their lives according to personal wishes and values. At Mount Sinai, they were still not ready to lead their lives independently, without Moses to feed them physically and spiritually.

Thus, when they feared that he would not come back, they tried to escape this unbearable reality. They created the calf to reassure them – in the same way that we may relate to some objects, books, TV or whatever to comfort us when we are confronted by feelings of loneliness and abandonment – and they drank, ate and danced in order to forget a reality too hard to bear: they were lost in the desert, without Moses.

The Hebrews were not conscious of their dependence on Moses, so they did not seek to overcome it. They were not yet “free” enough to imagine themselves making their own choices and decisions to keep on journeying on their own.

Sometimes we too may feel like the Hebrews in the desert: we fear that if someone or something disappears from our life, our journey without her, him, or it will become unbearable.

But is it really the case? Can we not keep on journeying without that person or that thing, even though it may be very difficult at the beginning? Maybe, we shall try to become more aware of all our abilities, all that we can do by ourselves, without a “Moses” who cannot always be here or who may disappear. Instead of letting our fears overwhelm us like a bad spirit, we shall identify them, recognise that they are exaggerated and say “stop” to them.

If the Hebrews had not considered Moses as the only person able to support them through their journey, they would not have panicked so much when seeing he was late. Even if they had been worried about him – and may have spoken about their worries to one another, or may have walked endlessly around Mount Sinai, eyes up in the hope of seeing him coming back – they would not have been desperate to the point of creating an idol of substitution and of drinking, eating, dancing to avoid facing a difficult reality.

Maybe the core message of this episode is that we should try to become more confident in our abilities to adapt to any situation. Even if someone we love and consider as a guide is not here, we are still able to make our own choices, to lead our own life, to find other supports, other advice. Sometimes, it demands of us to fight against inner demons – but by doing so, we would follow the example of Jacob who wrestled against his fear to become Israel.