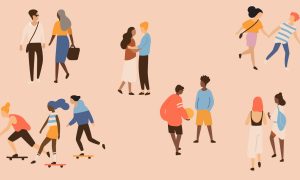 Parashat Ki Tissa: Why Relationships Fail…And How To Help Them Succeed.

In this week’s Torah portion, God speaks with Moses on Mount Sinai before presenting him with, “the two tablets of the Pact, stone tablets inscribed by the finger of God” (Exodus 31:18). This moment marks the culmination of Israel’s long and challenging journey both with the Egyptians, but also with God.

Thus far in the book of Shemot (Exodus) the Israelites have been drastically and dramatically released from their bondage under the Egyptians and into the servitude of Adonai. Along the way they have witnessed, and benefitted from, many of God’s miracles. Firstly the elders of Israel see Moses performing two startling acts; turning his staff into a serpent and then his hand suddenly becoming encrusted in a mysterious covering of white scales. Next, the Israelite nation witnessed God’s marvels, the ten plagues, which were brought down upon their captors, the Egyptians. Next, as they made their escape through the wilderness, they were guided by pillars of smoke and fire as well as seeing a sea split and then walking through it! Finally, when they were hungry, God made, “bread rain down for you from the sky” (Exodus 16:4).

In all relationships trust is built up over time and is often the result of one experiencing, with some level of consistency, the positive interactions with the other. This building of trust is a two-way process and may not be without some pain or disappointment; God has consistently been there for the Israelites, but they in turn have consistently tested God’s patience. However a strong bond is often the result of the successful overcoming of some trials and tribulations.

Now, we reach Ki Tissa and the formalisation of God’s relationship with Israel. Up until this point, God has only spoken the Ten Commandments; now they will be formally engraved and presented to the Israelites. The set-up feels analogous to a wedding; prior to such a simchah both spouses will have spent much time getting to know one another before entering under the chuppah (wedding canopy) and receiving a ketubah (marriage certificate). How shocked a spouse would be if, at the moment in which the ketubah was being signed, their betrothed were cheating with another person. At first glance this scenario sounds very similar to that of the Israelites and the infamous golden calf which is described in our Torah portion. No sooner has Moses gone up the mountain to finalise the covenant with God, than the Israelites are already turning their attention towards a new god to worship. As we read in Exodus 32:1, the people of Israel, “gathered against Aaron and said to him, ‘Come, make us a god who shall go before us’…”

As a child I remember being particularly puzzled by this turn of events. I found it difficult to understand how the Israelites, who had enjoyed such a close, direct relationship with God, could suddenly worship a statue of gold. The Torah itself actually explains the Israelites’ reasoning for this about face. Following their demand to Aaron that he build them a god, they bemoan, “…for that fellow Moses – the leader who brought us out from the land of Egypt – we do not know what has happened to him” (Exodus 32:1). From these words we may understand that the Israelites’ demand for a new god stemmed from their fear that Moses, their intermediary with Adonai, had deserted them. The renowned French Torah commentator Rashi, writing in the twelfth century, explains that the Israelites expected Moses to return at the end of a period of forty days. When he failed to come down from the mountain on the fortieth day, they feared something foul had befallen him and that he would never return. Rashi explains that Moses intended to return “after forty days” which is to say forty complete days. The thirteenth century French rabbi Hezekiah ben Manoah, better known as Chizkuni, goes further by suggesting that Moses should have announced the precise date on which he would return from the mountain in order to avoid confusion. However, as Chizkuni acknowledges, Moses himself was unaware as to exactly when he would return with the two tablets of stone.

When Moses does return from the mountain, he is furious at the Israelites’ apparent desertion of God, and confronts his brother Aaron to demand an explanation. In response Aaron repeats that which the Israelites demanded of him at the start of the chapter; namely to “‘Make us a god to lead us […] for we do not know what has happened to our leader Moses” (Exodus 32:23). From this verse, and Exodus 32:1, we might understand that it was not a new god that the Israelites desired, rather a new intermediary between themselves and Adonai. This is the understanding of Ramban, writing in thirteenth century Spain, who suggest that the golden calf was driven by a desire for a guide, not a god. As proof he argues that, as soon as Moses returned from the mountain, the Israelites immediately dismissed their golden idol, allowing Moses to destroy it without any intervention. Thus, if the Israelites had really thought the golden calf a god they would not have allowed Moses to do this.

What can we learn from these events and Chizkuni and Ramban’s interpretations of them? With any relationship good communication is essential as is the proper management of the expectations of any other persons or parties involved.

On the one hand, Moses (and God) did not clearly define the date upon which the former would return from the mountain with the two tablets of stones and, as a consequence, the Israelites feared something terrible had happened to their leader. This in turn led them to desert Moses and look elsewhere for support and guidance.

On the other hand, had the Israelites trusted a little more in their relationship with Moses, they would not have been so quick to abandon him. Trust is another key factor in any relationship and sometimes requires us to delay judgment in order that we can see how a given situation will play out before reacting. When we fail to do this we risk reacting wrongfully, without a grasp of all the facts.

Relationships are complicated and Parashat Ki Tissa provides a case study from which we can draw many lessons. The events there show the Israelites, and us, some of the many ways we can fail when we do not communicate properly or lack trust in the people in our lives. Of course good communication and trust do not guarantee a successful or healthy relationship; but they are a good place to start.