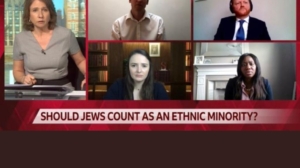 On Monday the BBC’s Politics Live discussed the question ‘Should Jews Count as an Ethnic Minority’. The immediate reason for this discussion was a tweet by Labour’s Deputy Leader Angela Rayner, congratulating the new leader of Labour in Scotland, Anas Sarwar, as ‘the first ever ethnic minority leader of a political party anywhere in the UK.’

Twitter responded immediately by bringing to mind recent (Ed Miliband) and not so recent (Benjamin Disraeli) leaders of major parties. And between that Saturday afternoon and this Monday morning someone in the BBC made the unfortunate decision to put the question to a panel so late in the programme, that the last answer was interrupted by the signature tune.

What to do with this? Let’s start by acknowledging that it makes many of us uncomfortable. My twitter feed featured pictures of the panel and exclamation marks like ‘Yikes’ or people’s palms hitting their foreheads. I was not sure whether I should write about this at all. In fact, I am still not sure.

Part of the difficulty comes with the concept ‘ethnic minority’. My English dictionary tells me that the word ‘ethnic’ is often regarded as offensive and therefore best avoided. If only we could. ‘Ethnic’ labels groups of people as other, as different from the larger national or cultural group. ‘Ethnic minority’ is a political term that has been designed as a means of supporting those who experience disadvantage because of their background, but its usefulness has been contested. Answering the question is not simply a matter of applying a dictionary’s definition. Instead, it introduces complex concerns about its use.

Later this month those of us who live in England and Wales will take part in the census. (People in Scotland will have to wait for another year.) This time, the census in England and Wales does not include ‘Jewish’ as an option under ethnicity – though it can be added under ‘other’. It was decided not to include the option after a focus group argued that the option evoked a history of discrimination and prosecution. The only immediate way to self-identify as Jewish is under religion, even if one does not consider oneself religious. We can avoid twitter, but not the census and thus in less than three weeks’ time we will have to decide if and how we identify as Jews.

At the start of this week’s parashah we read how God instructs Moses to take a census of the Israelites. (Exodus 30: 11-15) The phrasing of the request makes clear that such an undertaking is not without its danger: ‘When you take a census of the Israelite people according to their enrolment, each shall pay the Lord a ransom for himself on being enrolled, that no plague may come upon them through their being enrolled.’ To emphasise the point, the notion of expiation is repeated twice in the next few verses. Those eligible to be counted, men of twenty years and older, are to give their half-shekel as expiation for their person or their soul. These will be contributions to the service in the Tent of Meeting.

Why is being counted such a dangerous undertaking? Some commentaries relate the threat of the plague to a later episode in this parashah, when God sends a plague to those people who venerated the golden calf. (Exodus 32: 35) Others, among them Rashi, link the event to the story of David. Against all advice, David decides to count the people. A plague comes to the land and 70,000 die. (Samuel 24) For Rashi, numbers are ruled by the evil eye.

Our tradition forbids counting people directly. Instead we count noses or say: ‘Not one, not two’. We count half-shekels or recite psalm 28 verse 10 to decide if there is a minyan. The prohibition can be explained historically. A census was often a precursor to war or to taxes and thus rarely meant any good for those who were counted. The prohibition also addresses a recognisable psychological experience. We are appalled when we or our loved ones are reduced to a number, be that one’s BMI or a grade received for an exam or the daily graph of those hospitalised or dead in a pandemic.

At the same time, life cannot be lived without knowing the numbers. This was true in ancient times and it is true now. Our current life cannot be thought of without computers, machines that are named after the activity of counting. The current census assures us that taking part in it will help our community. We know that numbers can be used for good, when they show, for instance, that certain groups are under- or overrepresented in particular bodies.

Our relation to numbers is complex, to say the least. Yet, perhaps the most difficult aspect of all is their enticement. I have always been struck by how often mathematicians speak of beauty, but I don’t think numbers only entice mathematicians. Numbers can impress and convince. Numbers, we are told, don’t lie.

Numbers, in fact, don’t say much at all. They depend for eloquence on interpretation. Numbers don’t lie, but it is up to us to give them meaning. This is where they can be a benefit or a danger, where they can help or harm. It is this insight that I detect in God’s instruction to Moses and in the prohibition against counting directly.

Such reflections may not make completing the census any easier. Soon we will have to decide how we will be counted and we have to make sure that the numbers will be used for good. Perhaps the only reassurance is the knowledge that your rabbi will appreciate your half-shekel contribution to the service.