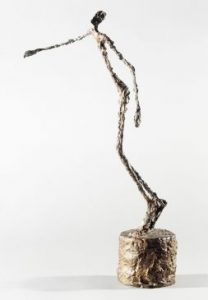 ‘Each one that falls has wings’

Ingeborg Bachmann, excerpt from her poem ‘The game is over’.[1]

This phrase has the charm to make us imagine the sequence of an ‘almost’ fall. The wings soften the fall, let it hang for a while and allow moving forward from an almost similar starting point.

‘Almost’ falling. Might we say ‘almost’ transgressing concerning the B’nei Israel when they make the golden calf? It is not so sure. What do they do while Moses is up in Mount Sinai listening to God, studying and recording the words of Torah? The B’nei Israel wait for a couple of days, then for a more few days and so accumulate days and days, nights and nights without Moses. They are expecting his return in order to go forward and shape together their new life as free people.

Sometimes waiting can bring boredom that is frequently a good condition to carry out an action or the creation of a work, so that is precisely what they do. Here they make a weird thing, they engage themselves in a finite adventure, a circular adventure that can lead to repeating a similar action. Indeed it is weird for after making the calf with precious metals, what could they do?  Their alternative could be to renew the same action as, remarked the commentators, the name for the calf in Hebrew suggests it, for ‘egel, calf, derived from a root meaning circular, round. We can walk around in a circle but we have to decide to cross the limit to move forward and to progress. In our life we experience the kind of events where we redo some actions that do not necessarily bring the progress we expect.

In Ki Tiissa the people experiment with the combination of the old and the new, the old in Egypt and the new in the wilderness. Then they add their boredom, impatience and as a result their recriminations against Moses, the amalgam lead them to the golden calf, a young, new, freed people making a young ox. God disapproves of the act, and Moses is upset. It is not a perfect decision, it is a work in progress.

What is perfection? When we read a poem, when we stare at a painting, we open ourselves to emotions, we dare to discover a part of perfection as being a restitution of something that we are habitually not able to explain. Nevertheless perfection cannot express a whole world, each achievement can only extract or express a part of it. Then step by step the artist in each of us, tries to find how to make the best part of our own inside world. Sometimes it is a piece of art, but the enthused inspiration is just an ephemeral moment, an extraordinary moment, but just a moment, hard to transform into a valuable action for oneself and a precious common purpose for a group.

Sometimes it is just a kind of piece of art like making a golden calf in the desert. The golden calf made of jewellery, gold, silver and other precious metals is an expression of fear, or lost faith, and is not a piece of art yet, for it has to be reworked and in a sense abandoned to face new challenges including God instructing Moses with the Torah.

The new challenge is to be a part of a larger purpose but also to accept the idea that ‘each that falls has wings’.

Reading a single excerpt of a poem is inevitably to misinterpret it. The poem from Ingeborg Bachmann is a conversation between two children at the end of a day, of a journey; they seem to abandon their dreams and illusions – for the night. If we recognise the idea that each piece of work is an interpretation of the world we can also consider that ‘every poem is a misinterpretation of a parent poem’ as suggested by Harold Bloom, we are all readers and interpreters.[2] Indeed it is a very good tool to approach the text of Torah.

What are the wings in the story of the golden calf? They are the attributes of God described further in Ki Tissa and they are the reactions of Moses who advocates for the people. According to Saadia Gaon the first attribute of God is inscribed in the name The Eternal itself, used in the introduction of the attributes. The tetragrammaton is the symbol of mercy; this interpretation instils a breath in the frame of mind of the enumeration of the attributes.[3] God is merciful, graceful, long-suffering, abundant in goodness, thirteen are counted.

Through the parashah we see an evolution of the reactions of the three concerned parties of the narrative. At first sight, the three spontaneously react with irritation, the B’nei Israel learn to provoke Moses, God does not understand the behaviour of the people and tries to take a distance from them, Moses communicates his angry by demonstrating the most sensational, shattering reaction, he breaks the two tablets. But before this dramatic response, Moses helps God to consider that the people still remain the people of God, the one brought out of slavery by His might and strength. And God regrets the promptitude to react. [4]

Why do the B’nei Israel get these wings of mercy of God and advocacy of Moses? The wings can be deployed and assumed for they initiated something, they provoked reactions with their ‘almost’ piece of art so it is remarkable that the attributes of God are recited in this precise parashah, after the making of the golden calf. The golden calf is a new trigger to finding solutions against fear and doubt in the future, as in our own life we sometimes create weird protections to call for strength and hope.

The golden calf is an ‘almost’ transgressing act, the presence of God is still with the B’nei Israel, the story and journey go forward to teach, to progress for the good of each and for the good of the whole community. As a reminder for whom needing to ask God, to learn from the law, a pillar of cloud is visible in the front of the tent of meeting.[5] The visibility is for each person and for the whole community. This presence is to preserve a believe in perfection and to focus on building a community, about avoiding major difficulties and going on a better stable path.

The broken tablets are supposed to be preserved in the mishkan-tabernacle to reassure that life needs confidence in decision but also wings in our hunger for hope, sometimes.