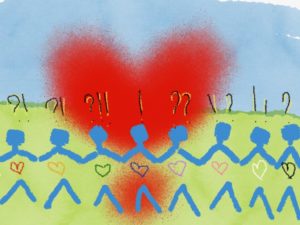 The One We Rebel Against is No One Else but our Neighbour, the one we shall love.

In these times of great distress, after many socio-cultural changes have shaken the population over the past few years, reading parashat Korach is quite intense.

Indeed, in the words of John Lennon, there is a tension between evolution, revolution and destruction. And as Jews, we are told that we must help make the world a better place, and at the same time, we are told that we must not destroy. Thus, every time I encountered a teenager wanting to defend Korach during their Bar/Bat Mitzvah speeches, I faced a dilemma. This was because, in a way, rebellion is very healthy. Some causes are to be fought for. As rabbi Abraham Joshua Heschel explained, he, spiritually, had no other choice but to march with Rev Martin Luther King. As an educator, it is very hard to tell children not to support Korach. It allows them to rebel against what we, as educators, are supposed to defend. Thus, they are allowed to grow up by “separating” from us, within the framework we have created for them.

After a few years, however, it became impossible for me to defend Korach. I just couldn’t stand the man anymore. He was too selfish, too evil intended and too hypocritical. Therefore, I went back to what my rabbi and the chachamim (the sages) of my synagogue taught me. There is another rebellion, one that is considered kosher, but one that is just as rock’n’roll as The Who destroying their instruments at the end of most of their early concerts (something I must admit we started doing with my rock band in the early 00’s, but that’s another story).

This act of rebellion is the one of Moses destroying the tablets, and probably is even more rock’n’roll than The Who!  Yes, you might argue that Moses’ revolt is not as impressive as Korach’s, but symbolically, it is much more considerable. Moses destroyed what God just gave him. Who would dare to do such a thing?

Therefore, since it was Moses who did it, and since he did it because the Hebrews had started worshiping a golden calf, tradition understands that it is acceptable, at times, to be angry. And even if we should not destroy, acts of destruction, to a certain extent, can also be understood. But even if there is tolerance within our tradition, it is clear that Chazal (our Sages) warns us that anger and destruction are not fertile grounds for better days – days of social justice, inclusivity, days of Liberté, Egalité and Fraternité (if you allow me to pay honour to my country’s most worshipped values).

Indeed, as a punk rocker clearly stated, there is No Future in a world motivated by anger and destruction. The solution to that problem might reside in the other tension surrounding Korach’s episode: the tension created by God’s punishment.

Indeed, Korach was literally swallowed up by the ground. If we stick to the literary sense of what happened to him, and we take into consideration that there has been no trial nor judgement, it feels rather unfair… But God is God, and what God does is for the best. So, we are allowed to judge God, but I personally rather like not to. If I have an ethical problem with something that happens in the Torah, and yes I have more than one, I must solve it with better thinking. As the prophet Zecharia suggests it: “Not by might, not by power, but by spirit alone, shall we all live in peace”.

Thus, in this case, I consider the episode gives us food for thought. It is clear that, as for us, human beings, we can only recognise that we are not allowed to act like God. Indeed, we are even asked by God to love our neighbour as we love ourselves! So what do we do when we are faced with situations we do not like? Especially those caused by our own neighbour!

I guess that this is where the true lesson of Korach’s revolt lies. If we ever want to rebel, we must keep in mind one thing: the one we revolt against is our neighbour, the one we shall love.

Therefore, I guess that this is what we should always keep in mind. I would even go further by sharing my most personal intuition. As humanity seems like it is about to reach a crucial moment, once we understand that we are one, and that everything we do has an impact on everyone, and that we are the two hands of one same body, we should, therefore, always be careful what we do to the other hand.  As we are on our way to reach that moment, it will allow us to make this world a better place, it is now time to increase the quality of our patience and never forget. Never forget that we are all in this together. The one we revolt against is our neighbour, our brother, our sister, the one we shall love, and the one with whom we will keep on building this world together.

This brings another challenge of defining what “love” means, but let’s speak about it around our Shabbat dinner tables.