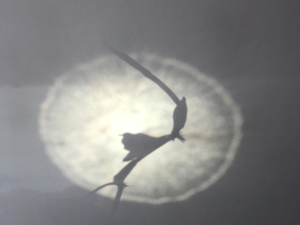 The Blossoming of Matteh: An Autobiography in Brief

In my youth I caused a great deal of mischief, and I will not deny that I allowed myself to be used as a tool by those who held power over me. To be fair, I have no doubts that I was created and shaped by the Divine and that most of the deeds attributed to me truly served a greater purpose, yet this faith does not release me from the guilt I bear for actions I would not myself choose. I have been accused of many things, and certainly there is justification for most, however, I must say that the deed which turns most stomachs are the charges of cannibalism. I doubt this excuse would stand up in an actual court of law, but I swear that God made me do it. Honestly, I wasn’t in my right mind at the time, and if it ever came down to it, I would certainly claim temporary insanity, though I probably wouldn’t have a leg to stand on. You see, for a brief time I was a bit of a snake. One moment I was stiff, rigid, full of resolve, and the next I was cast to the ground and something in me snapped. I felt myself bent to breaking point, and before I knew it, I was transformed into something different entirely. Those around me initially recoiled, yet quickly I found myself surrounded by others like me whose rigid resolve faded as they too became serpents slithering upon the hot midday stone. The next bit is quite embarrassing, and though I am fully certain that God made me do it, in my changed state I kind of… sort of… ate the other snakes. This astonished those in charge, but in the end it didn’t make a difference to the cause of my master.

Look at me, I’m getting way ahead of myself, and I haven’t even made my introduction. My name is Matteh, which is Hebrew, but you can just call me Rod.

I don’t mean to brag, but you might say that I am a very important member of the leadership staff of the Israelites. For a long time I really only held a support role, holding up the right hand of my master Aaron, whose brother really seems to make all of the decisions, however both of them defer to God on all the big matters. After the unfortunate cannibalism incident, I took on a much more serious role, though I can’t honestly say that I am proud of how I was used. Metaphorically speaking there is a great deal of blood on my hands, though I don’t exactly have hands. My master used me to do miraculous and terrible things, bringing blood, pestilence, famine, wild swarms, and all manners of plague upon the enemies of his people. I’m not going to lie; there is something quite intoxicating about wielding so much power, channelling the will of the Divine into creative destruction, watching enemies flee in terror, crying out to their leaders as they behold the horror of what I have helped bring upon them. But with a bit of perspective, having travelled many miles and endured years of hardship since that time, I can now admit that those were not my proudest moments. I have been worn down by the road, hardened by the unrelenting heat and exsiccation of the arid desert, and I have mostly managed to serve my master and his people in peace, though disharmony and malcontent among them is never far off.

And now we reach the bit of my story in which I finally blossom into something greater and more beautiful than I could have ever imagined. Following what I believe to be an attempted coup against my master and his brother, a terrible thing happened, which thankfully did not fall upon me to initiate. The wrath of God seemed to know no limits. Some were swallowed up by the very earth beneath them, dragged alive into its depths. Others suffered immolation as they sought to bring their own offerings to God in the place of my master, whose family alone held that privilege. In the continued rebellion which followed, a plague raged among the people and it was my master alone who stood between the living and the dead, armed only with sacrificial fire and incense, stopping the plague through his expiation. When the smoke lifted, thousands were dead and the rest were terrified. I knew for certain at this moment that I had grown into a new role in my community, as I was not the tool of destruction, nor was I the remedy, but something entirely different indeed. Soon, however, I was used in a way that initially made me doubt I had undergone any true change at all, except that with faith, I was able to transform into something beyond my wildest imagining.

It started with a searing pain as I realised that I had been branded! The letters carved into me spelled my master’s name, which seemed odd at the time given that he had been carrying me long enough to the point where his very handprint had become etched into my neck. I found myself laid down inside the Tent of Meeting, God’s portable home, and all around me were others just like me, eleven of them, each bearing a different name. Immediately a terrible thought possessed me; was I about to become that horrible serpent of my youth, the one who devoured others without hesitation? Perhaps I myself would be devoured this time, and in that moment it seemed the sort of justice I deserved. It was at this very moment, in the height of my existential terror, that the change began to occur. Over the course of the next several hours, life began to flow within me unlike anything I had felt since my earliest recollection, and soon living buds sprouted from within me, which became flowers, which became almonds. When we were collected the following day and my transformation was revealed to the people, I finally became aware of my true destiny: I, a simple wooden staff, was to be a symbol of my master’s right to act as priest over the people, to once and for all quell future rebellion of any people who might seek to take this right from him and from his descendants. In my majestic rebirth, God commanded that I remain as a sign to all who might challenge the Divine rule, or seek to rebel against my master and his brother. Perhaps this time the Israelites will learn their lesson, cease their grumbling, and carry on with their journey to the promised land. This, however, is a story for another day.