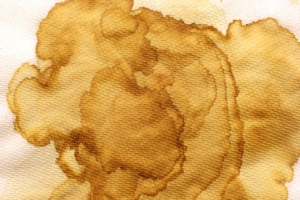 For his first six months or so, my son Omri was a terrible sleeper. So what my wife and I would do, after we ate dinner at about 7, was split the night: she’d go to bed while I settled him in a sling until his next feed at half-past 11.

Sometimes, though, the pattern didn’t quite go to plan – and that’s why there’s a curry stain on my desk.

One evening, instead of eating dinner at 7, I was teaching a Zoom class (about werewolves in the Torah), which meant I had to wait until later to eat dinner, after Omri was soundly asleep in his sling. Because a man wearing a sling isn’t really mobile, instead of cooking I ordered a curry. And, in my desperate attempts to open the containers silently, I managed to stain my desk.

But no. And the reason is in this Shabbat’s parashah.

After Korach’s rebellion, Moses challenged the rebels to a showdown: they were to offer incense before God, and if God accepted it, that would prove their case. Long story short: they didn’t prove their case. They all died.

But what happened to the fire-pans with which they offered the incense?

“Let them be made into hammered sheets, as plating for the altar,” instructed God, “for once they have been used as an offering to the Eternal One, they have become sacred.”

Sacred. Holy. Kadosh. Even the fire-pans used by sinners, as part of their attempt to unseat God’s chosen leader, were holy, because they had in fact been used to bring an offering. They formed part of the Israelites’ story and had to be treated with respect.

But more than that: they were actually attached to the altar, the focal point of the Mishkan. A solid, visible reminder – an artifact – of the moment when Korach tried to seize control of the community.

The curry stain on my desk isn’t quite as historical. But in a way, it also marks an important moment. It tells the story of how I had a sleepless lockdown baby. How I did all my rabbinic work from my front room for over a year, juggling shiurim and childcare. How I had to eat a curry in dead silence.

The Mishkan was decorated with evidence of the Israelites’ mistakes. Errors and misjudgements are sanctified.

So too are our lives: we go wrong, we damage desks, we hurt each other. And we wear the scars, and grow.